#HASHTAGGALLERYSLUT - Keith Cole LIVE at the AGO!!! 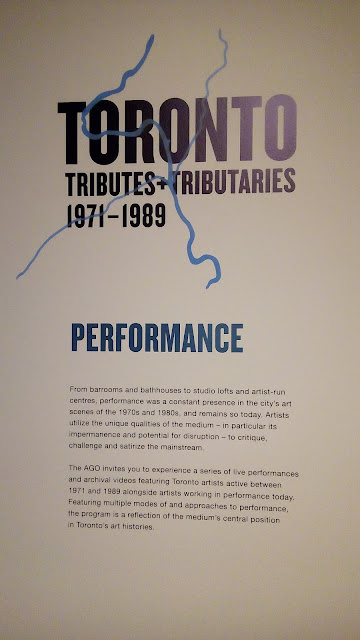 “The history of performance in the twentieth century is the history of a permissive, open-ended medium with endless variables, executed by artists impatient with the limitations of more established art forms, and determined to take their art directly to the public. For this reason it has always been anarchic. By its very nature, performance defies precise or easy definition beyond the simple declaration that it is live art by artists. Any stricter definition would immediately negate the possibility of performance itself.”

Roseiee Goldberg, Performance Art from Futurism to the Present (1979)

Keith Cole’s current performance/installation at the Art Gallery of Ontario defies easy or precise definition. #HASHTAGGALLERYSLUT is an unabashed celebration of all things Canadian and sacrosanct - or perhaps better put - all things embedded in the sacrosanctity of Canadian Cultural practice, piety, and promiscuity. Now there’s a mouthful of words to ingest.

Reflective of some of the poses he performs in the centre of the room, large photographs of Cole in drag, hang from the ceiling, interrupting traditional male het identity as he lounges bewigged and corseted - a lone blousey courtesan of sorts. Instead of the demure femme wig in the big photos however, Cole the live performer wears an elaborate head dress that becomes a central and very active prop during a ninety minute performance of both mesmerizing and bewildering endurance for both audience and performer. 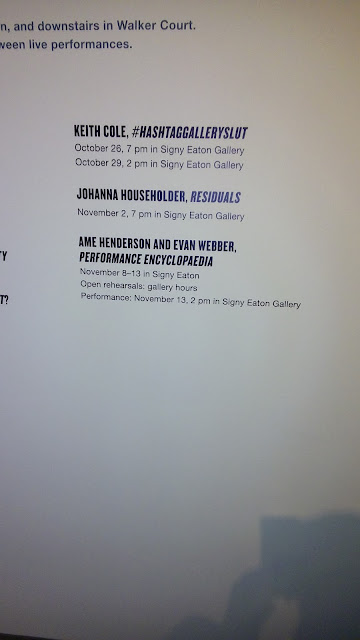 “Performance has been a way of appealing directly to a large public, as well as shocking audiences into reassessing their own notion of art and its relation to culture.”

During Cole’s performance spectators enter and leave as they see fit, and when they see fit it is always entertaining to overhear or to simply observe their expressions and their words.

“What’s going on? What does it mean? When will it end? Has it started yet? Is he going to shampoo and condition?” 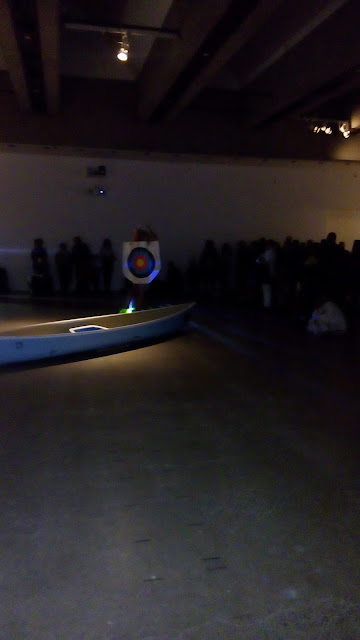 Making a distinction between theatre and performance has been cautioned against as a tendency toward “giving a ‘preciousness’ to performance art that it does not deserve or need.”

Gregory Battcock, The Art of Performance; A Critical Anthology, 1984

There is nothing precious here - without giving too much away about Cole’s latest exhibitionist/exhibition/installation/performance it may be sufficient to say that, true to Keith’s notorious style as a performer/bon vivant/social political activist, candidate for mayor, #whathaveyou over the past few decades, his current work at the AGO continues to resist all of the conventional elements of traditional theatre and cohesive narrative by exploding the myths and grandeur of one of Canada’s most beloved painters. Considering Tom Thomson’s complicated legacy as the premise, exploding the puzzle of Thomson’s unanswered finale adds to a further web of unsolvable mystery through a performative element that teases and teaches regarding the act of how to be Canadian without really trying. Cole asks many unstated questions as he gives himself the most vulnerable position of all, centre stage and literally submerging himself in the iconic mire of particular Canadiana-queries -

I.E. Was Thomson a homo? How did he die? Why all the fishing line around his ankles? Is that a paintbrush in your pocket or are you just… Do Thomson’s paintings evoke an authentic Canadian experience or are they just pretty canvases depicting nature? What the fuck is authentic anyhow? Was Lawren Harris really related to Lauren Bacall or was he just caught up in a frozen petrified forest of his own design? Is Steve Maritn funnier as a curator or a comic?

Enough already. Indeed, there is something starkly surreal, comical, and inexplicable about what Cole does in “HASHTAGGALLERYSLUT, and yet some of what he may be saying and doing might find substance in a simple and performative question for artists to ask themselves at the outset and then just carry on from there - why not just break all the rules and present whatever Thomson’s legacy makes you feel? Which is precisely what Cole seems to do in a truly immersive and relentless performance that defies easy access/meaning by reveling in queer identity’s most spare, elegant, and beautifully cluttered signifiers - drag, sex, sex & more sex, sex in drag - among others. Also, did I mention sex… 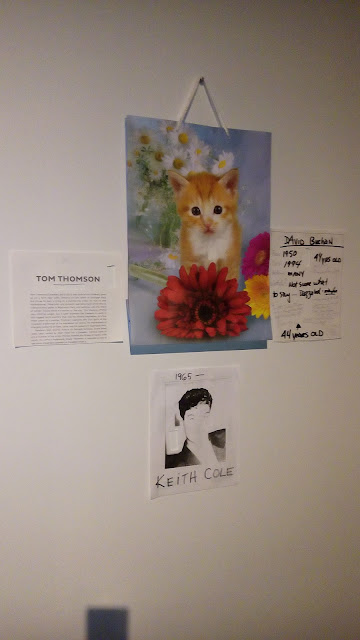 Through the use of a variety of simple landscape photos with accompanying erotic nude dude images, alongside painted portraits adorning small areas of the huge wall space available, Cole’s installation element gives the gorgeous clutter plenty of room to breathe in, and to also make room for very evocative video visuals designed by Raymond Helkio that suggest, in rapidly moving bright blurred tones, the Ontarian locales that Thomson inhabited when he began to create his beloved painted lakes, forests, and all that glorious  natural jazz. Just go to Huntsville for the day some random Fall and you will see it all over the bloody place -  from night lights to mugs to sweaters to murals to actual trees littering the expensive wilderness. It is all fabulous!

But long since Thomson met his  tragic demise in a tippy canoe near or in (I can’t remember) Algonquin Park in 1917, a great deal has happened in art, in painting, in performance, and in theatre - needless to say, but I said it anyway. And of course the root of the word theatre, bearing close yet marginalized kinship to performance - is theory, and Keith Cole pays indirect tribute to his own, and many other performance artist’s debt to fairly recent developments in Queer Theory in general and Queer Failure Theory in particular - developed by Judith Jack Halberstam (among others) over the past several years.

“Being taken seriously means missing out on the chance to be frivolous, promiscuous, and irrelevant. The desire to be taken seriously is precisely what compels people to follow the tried and true paths of knowledge production around which I would like to map a few detours.”
J. Jack Halberstam, The Queer Art of Failure

Cole brings a well considered form of “low theory” to high places ("low theory is an actual term, google it, related to Queer Failure Theory) by taking part in the performance component of the AGO’s current show Tributes & Tributaries; 1971-1989  exhibit - currently showing on the fourth floor (until May) and displaying a broad overview of Toronto cultural practice (curated by Wanda Nanibush). 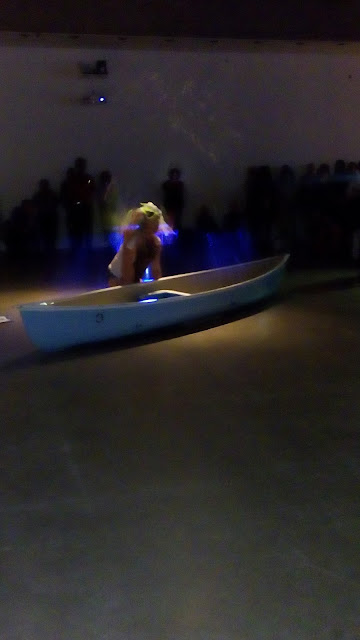 TIPPY CANOE AND TOM THOMSON TOO - HE'S GONNA WASH THAT MAN RIGHT OUT OF HIS HAIR!!!

And then there’s that all white clad sailor type (Ryan Russell), specializing in the kind of shame that fuels failure, traversing the playing space and always there to remind us at specific intervals during the show that shaming remains and has always been a part of queer experience, a part that we often spend our lives liberating ourselves from. By coupling an intense bodily performance (taking a great physical toll on the performer) with an open-shirted muscly male subject harassing him, Cole subjects himself to a kind of self-shaming, partnered with said well-built sailor type. Thus raising images that intersect with both misogyny and homophobia, and manners in which feminine identity, within both male and female bodies, is simultaneously celebrated and mistreated. 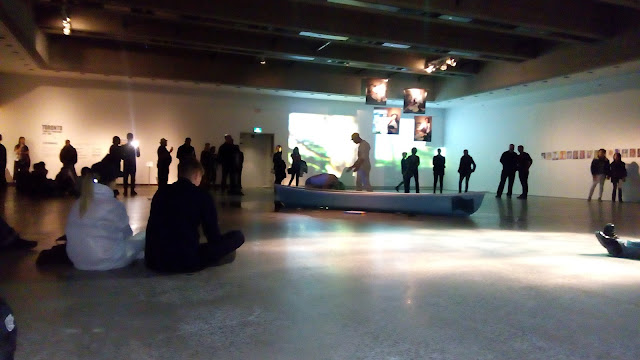 RYAN RUSSELL AS THE SAILOR WHO HASSLES THE STAR 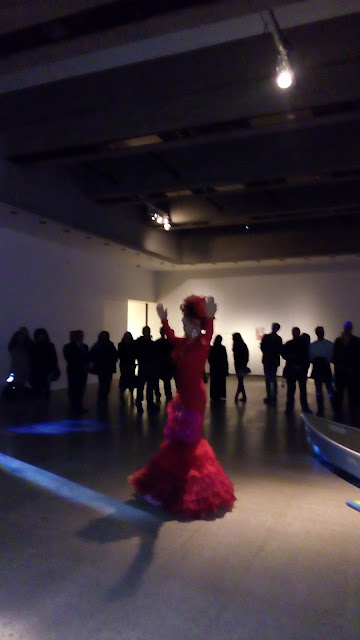 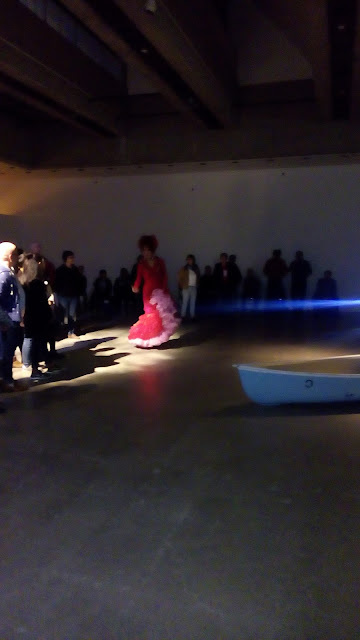 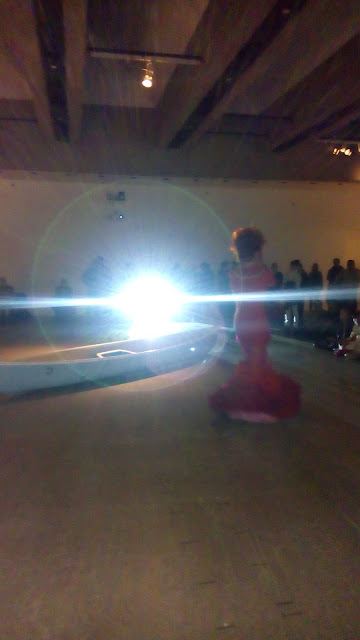 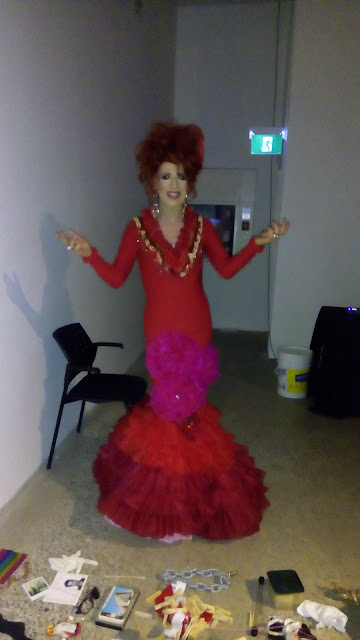 Maria Del Monte’s beautiful performance opens the show, suitably shadowed and unaided by the flair and intimacy of a drag club - taking on epic proportions as clear succinct lyrics abound from speakers - defining (& misdefining) elements of gay identity that entertain, delight, and inspire awe. Del Monte, in a sense, ghosts drag as she takes it into an unlikely setting. Both like and unlike the intimate drag moments in a small bar on Church Street, or the striking cinematic gestures from drag sequences in an Almodovar film, Cole’s inclusion of drag allows the elegant Queen to leave the usual public/pubic space for ‘her’ display and enter a space that infrequently includes this kind of camp cultural consideration. 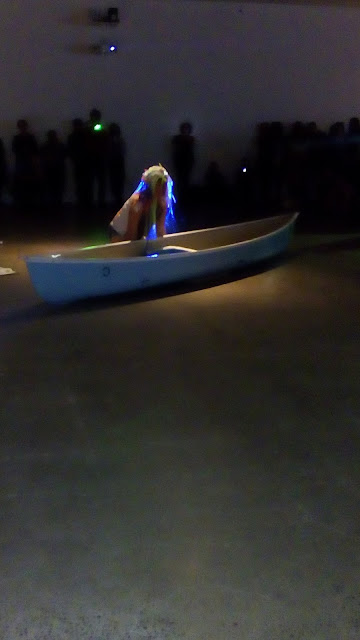 #HASHTAGGALLERYSLUT is not always an easy performance to watch, or listen to, and that is possibly part of the point, if there even needs to be one. Allow me to suggest - or not - that one may choose to approach, enter, exit - whatever - this particular event without any pre-meditated expectations. Wander about the space, enjoy the expansiveness, make unfunded small talk in big subsidized places, watch the gorgeous flickering videos that at times move hauntingly into the floor space creating a Group of Seven’ish aqua-infused arboreal texture for Cole’s hardworking, deliberate, and self-effacing escapades. Listen very carefully to the opening sung/synced words and try to decode their many misleading, dramatic, & delightful meanings. And in doing so, if it pleases you, or not, discover and/or re-discover that there is a great deal more to the history of Canadian Art (& by association, Performance Art) than a bunch of painted trees clothed in nature’s colourful autumn drag, resplendent and breathtaking in their simplicity, resistant and seasonal in their dying grandeur - and spiritually performative in their utter lack of obvious textual meaning. 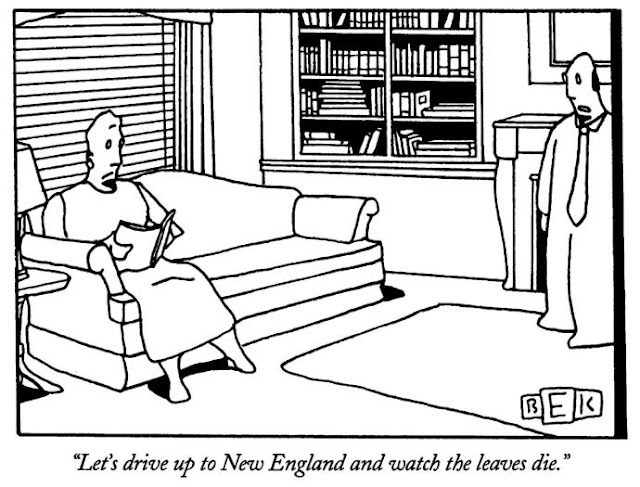 #HASHTAGGALLERYSLUT OPENED ON OCTOBER 26 (7PM) - WITH ONE MORE PERFORMANCE AT TWO PM ON SATURDAY OCTOBER 29 - AT THE ART GALLERY OF ONTARIO - DUNDAS STREET, TORONTO 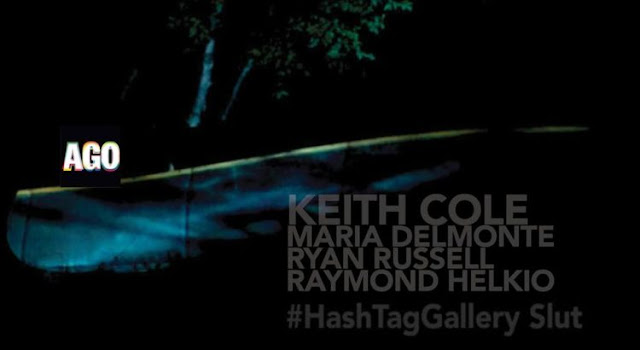 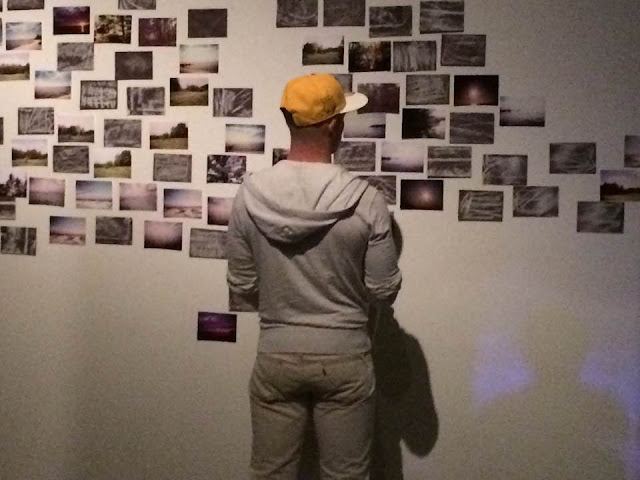 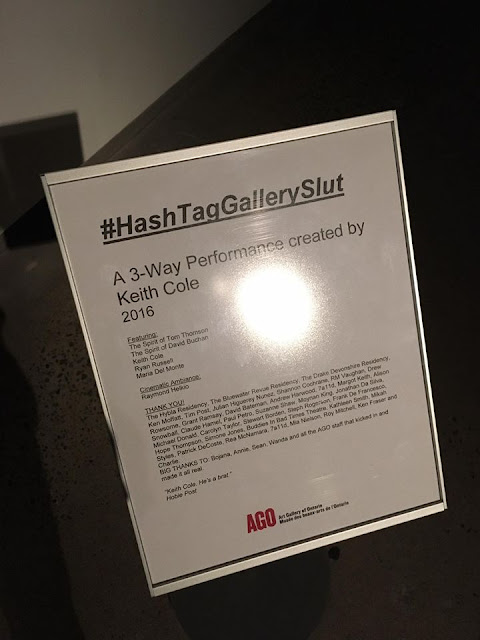 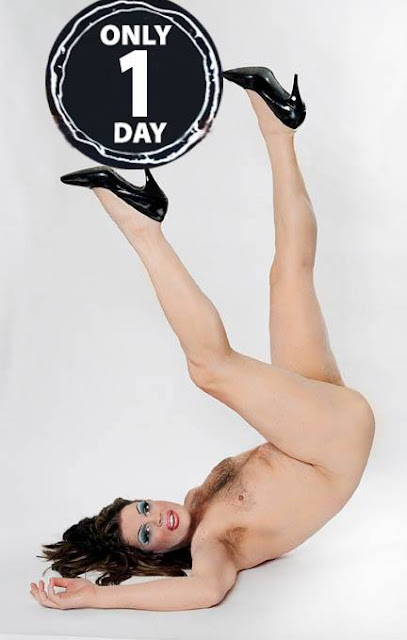