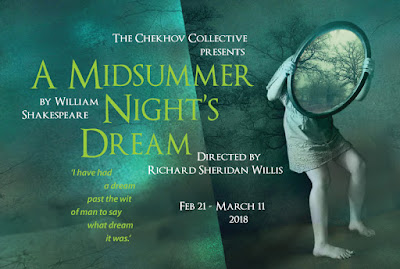 A youthful and playful production of A Midsummer Night's Dream, mounted by The Chekhov Collective, bears all the signature trademarks of a company devoted to breathing new life into old work. The clearly spoken simplicity of the performances, and the colourful costumes, appropriate to a history of Shakespearean dress that recalls the hodgepodge of garments used and re-used by actors, often comprised of contemporary dress of the time, is reflected in costume designer Shannon Lea Doyle's exquisitely hodgepodge collection of Value Village like treasures.

A pervasive hint of glitter on a players dark clothing, in the form of a simple contemporary pullover, or the simplicity of Pucks casual 'ladies'/wear under neutral slacks and long sweater coat, give the overall design a wonderful sense of frivolity and play that overlays the extremely serious and tragic tone of a play built upon the premise of a stolen Indian child.*

Jealousy and romantic confusion, mixed with the charm of a fairy's magic and a King's amorous chauvinism, is propelled forward by an elegant white curtained setting that frames the stage, at first glance, for the bold, bright, and delightful unseemliness of the adventures about to unfold. 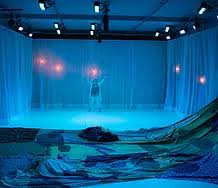 Without exception, the ensemble handles the language with expert clarity and skilful physical rambunctiousness. Standout performances by Michael Man as Demetrius/Quince and Zach Counsil as Bottom display intricate physical comedy throughout.

Counsil's fumbling Bottom becomes hilariously and exquisitely acrobatic, while Man's Demetrius/Quince utilizes facial expression in engaging ways that bring life and vigor to every onstage encounter he takes part in.

Director Richard Sheridan Willis has used his performers and setting with a great sense of playful abandon that enlivens the action yet slightly overshadows some of the serious overtones of the narrative. Nevertheless, this is achieved subtly as Paul Amos (Oberon/Theseus) manages to insert a sly demonic sense of manipulation via devious tones and sensual prowess. His aggressive handling of Elizabeth Saunder's delightfully elegant Puck clearly articulates, physically and vocally, the relationship between a King and his wily cohort.

Running until March 11th, The Chekhov Collective's Midsummer Night's Dream is an immensely entertaining production that allows Shakespeare's delightful comedy to embrace the blend of play and deception so crucial to a narrative dependent upon love's complicated equations and the warring powers that unfold. 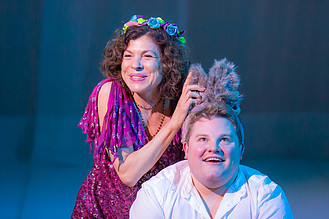 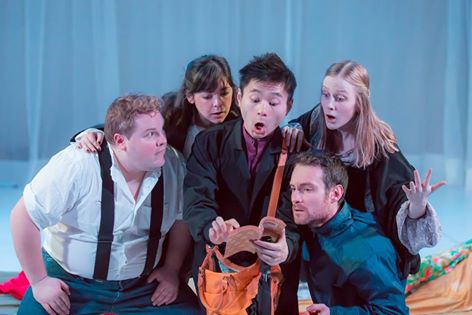 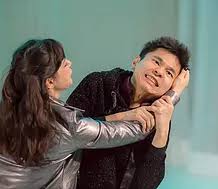 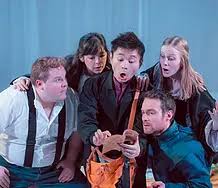 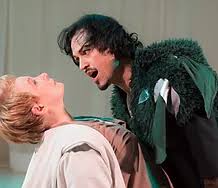 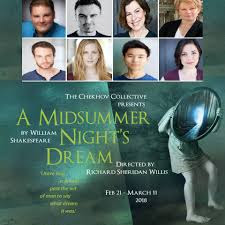 * "The Puzzle of the Indian Boy in “A Midsummer Night’s Dream” challenges interpretations of the play which posit an east Indian prince and an east Indian location for Titania’s lengthy description of “India” in Act Two, Scene One. Such interpretations appear to have originated in Purcell’s late 17th century opera The Fairy Queen when English trade with India and the east was well under way, but at the time of the first performance of A Midsummer Night’s Dream in 1595-6 there is no connection with the east Indies. At the time of the first performance of the play “India” still signified America or the west Indies, as it does in many Shakespeare plays and in contemporary discourse -- a fact overlooked by the dogma of an eastern Indian boy which actually has no definitive textual authorisation in the play itself. At the time of the play the English desire for the west Indies is paramount, and this is manifested in Sir Walter Ralegh’s voyage to Guiana in 1595 when he returns with a real Indian prince. America as “India” in the play therefore grounds it in its historical context, places Titania’s description of “India” as an early modern English perception of the New World, and radicalises centuries of received wisdom on its interpretation: pixie-dust trivialisations of Oberon, Titania and fairyland are set aside in favour of historical analysis of England’s hopes for American empire which was made possible by Ralegh’s return with a real Indian prince."

https://www.researchgate.net/publication/33053859_The_puzzle_of_the_indian_boy_in_a_Midsummer_Night%27s_Dream
Posted by bette at 11:08 AM