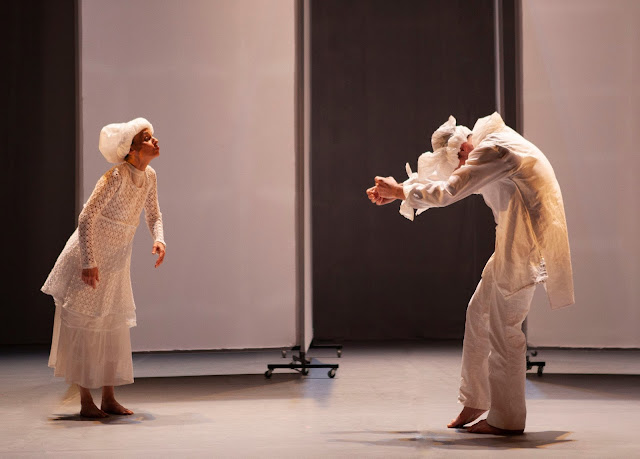 Opening with a pair of delightfully costumed clown'ish clad figures, performing choreography that is at once comic/melancholy and mime-like, the current re-mount of Bouchardanse's HISTOIRE D'AMOUR is an evocative and layered tribute to the complex strains of romantic love through the ages. 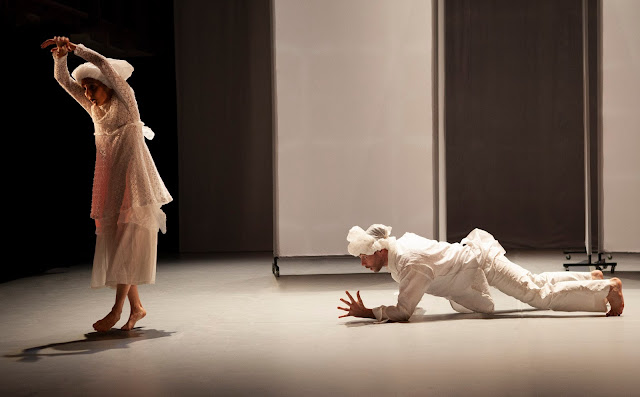 Gorgeous projections throughout, ranging from a simple snowflake effect to complex textured backdrops that seem to glow and move elegantly with layered natural formations (original design by Ayelen Liberona, design remount by Matthew Maaskant) enhance the choreography, giving the setting a simultaneously spare and minimalist shape for the dancers to inhabit. 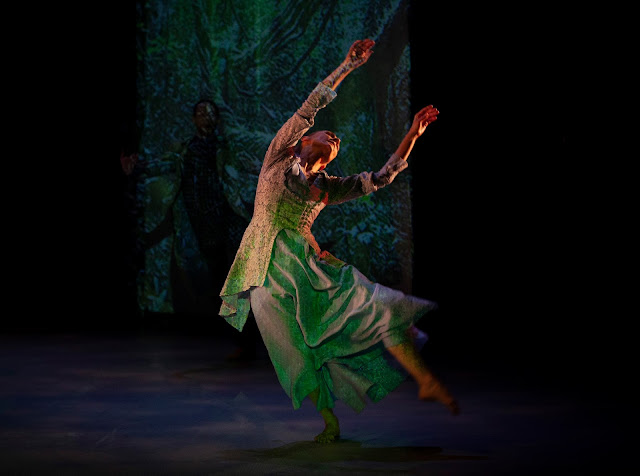 Sylvie Bouchard and Brendan Wyatt provide silhouettes from behind simple screens and move outward into the space with a tightly conceived set of program entries that all perceive the essential bonding between lovers with great skill and a pas de deux like strength of reliability and passion. 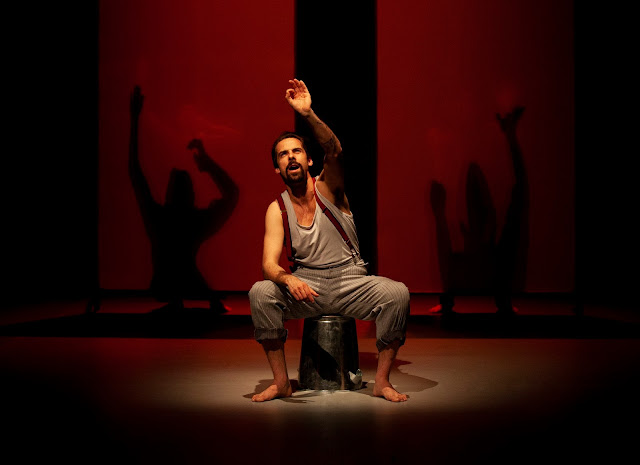 The classic notion that love is frequently rendered sightless gives the performers the opportunity to don masks that accentuate the theatrical dependence upon another body that the narrative demands by its very nature - a nature constructed both socially and born integrally from the union of bodies in the throes of romantic unpredictability. 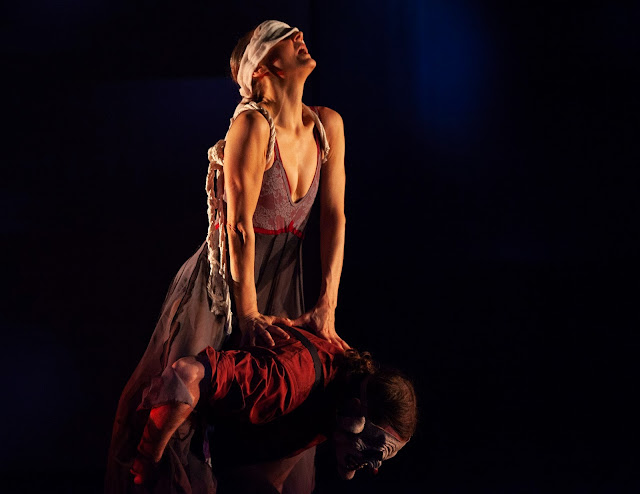 Vincent Leblanc-Beaudoin's role as narrator/dancer/actor has been developed beyond the original production, including him in more detailed choreographic moments, entwined sensually at times, and becoming a steamy interlocutor within the action at hand.

His playful sense of vocal variation, from direct, masculine tones stabilized by a strong declamatory pose toward the audience, to moments of over the shoulder butt-wiggling and cheeky tones of voice, add to the varied degrees and modes of love depicted. Light humour and sultry passion create a through-line for choreographic and theatricalized excellence throughout the overall program. 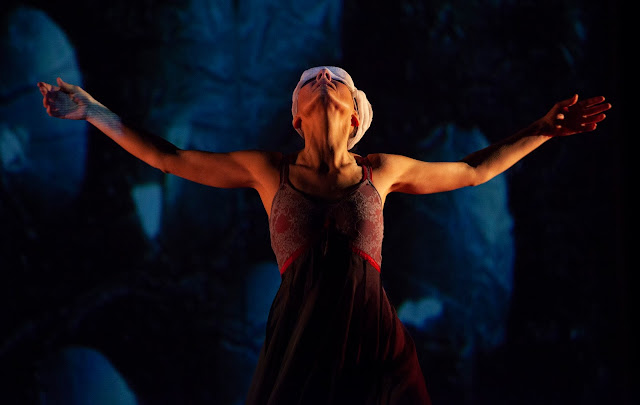 The final audience interactive moments enthral as the duet creates a response to single words dilineating personal responses to first love written on cards given to the audience as they enter the space. Without revealing the actual words, Wyatt and Bouchard display the skilfully integrated dependence and independence that love relies upon, with varied movement that heightens the stakes and provides for a spontaneous, moving, frequently comical sense of choreographed emotion. The balletic couples with more free form dance/dramatic action, and paves the way for a wonderful sense of fulfilled and unfulfilled closure for the lovers at hand.

Dramaturge/director Marie-Josee Chartier has allowed the performers to take the stage with a strong sense of filling a single uniform space with word, music and movement that interrogates all of the intricacies love torments and pleases us with.

Cheryl Lalonde's costumes elegantly suggest the historically inclined movement of time, along with sound & music suggestive of a parade of various periods - from the Troubadours, to Shubert, Hollander, Thomas Ryder Payne and Eric Satie.

All of the choreographers have conspired to locate love in many periods, places and emotional terrains, from the opening melancholic clowns 'PRELUDE' (choreographers; Wyatt, Bouchard  Chartier) to Denise Fujiwara's 'UNQUIET WINDS' - Louis-Martin Charest's 'BOUND' - 'YEARNING' by Bouchard, Louis Faberge-Cote, with Brendan Wyatt - 'DESCENT' by Julia Alpin - 'THIS IS HOW WE LOVE' by Susie Burpee. The ensemble of choreographers seamlessly renders HISTOIRE 'D'AMOURE with the broad and intricate strokes that romance through the ages has projected upon a mixture of bodies in a variety of gendered positions. Male on male, female on male, female on female, menage upon menage - like love... 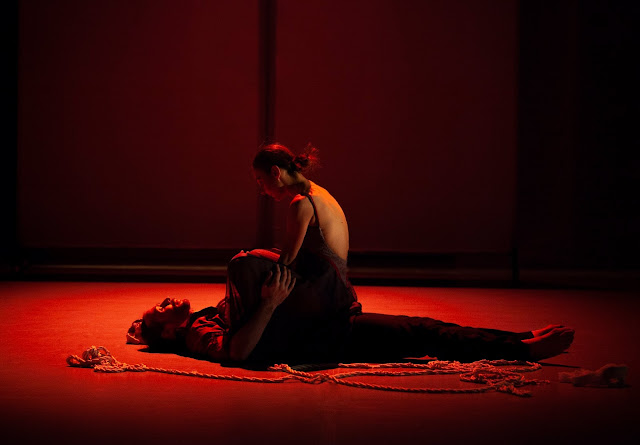 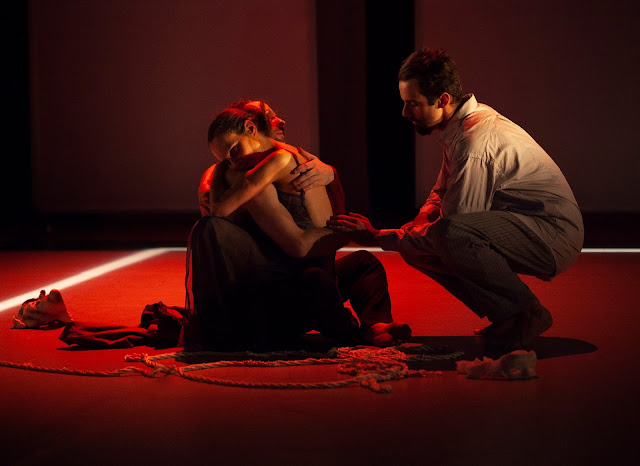 HISTOIRE D'AMOUR RUNS AT HARBOURFORNT CENTRE THEATRE UNTIL APRIL 7TH/8PM
Posted by bette at 6:01 AM