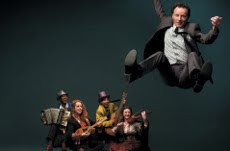 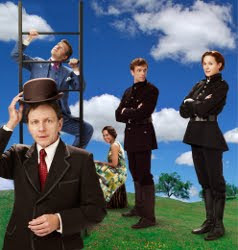 CARVER IN BOWLER HAT AS JACQUES IN AS YOU LIKE IT

The Stratford Festival production of Jacques Brel is Alive and well and living in Paris is an exquisite example of musical cabaret theatre at its finest. A cast of two men and two women deliver a gorgeous array of engaging, poignant, and high-spirited songs from the iconic French singer and composer.

Any longtime Brent Carver fan will be mesmerized by his superb performance, and may be tempted to wish that every song was performed by Carver in concert. But the other performers are up to the task of keeping company with a musical theatre genius as they hit each note with perfect theatrical and tuneful pitch as they take audiences on a joyful ride through a diverse array of unforgettable songs.

'AS YOU LIKE IT' A SURREAL RIDE THROUGH COMEDY AND FASCISM !!!

Des McAnuff’s production of As You like is a thoroughly entertaining and utterly surreal version of one of the bard’s most popular comedies. McAnuff’s penchant for Broadway-esque showmanship is superb as he updates the setting and gives the play an eerie and frightening Hitler-ian glow that is punctuated by Debra Hanson’s gorgeous Magritte inspired sets.

Standout performances by Ben Carlson (Touschtone), Lucy Peacock (Audrey), Andrea Rung (Rosalind), Paul Nolan (Orlando), and Brent Carver (Jacques) are beautifully clothed in costumes by Dana Osborne. Although strong, and appropriately infused with touches of military madness, the uniformly formal garb - with touches of casual panache - does not distinguish between some of the players as effectively as it might have. McAnuff’s and Osborne's articulation of Touchstone in particular - in a casual suit - does not give Carlson an adequate visual or physical framework for his engaging commentary on the comic/sardonic fool’s paradise his counterparts are meant to play in.

Nevertheless, with delightful jazz based musical moments by Justin Ellington, and a splendid setting for the gender bending antics to unfold, the current Stratford production gives Shakepseare’s classic court and kooky forest an appropriately complex playground for comedy, romance, and power hungry fascists to misbehave within.

at the Festival Theatre until October 31st 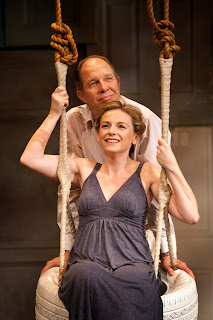 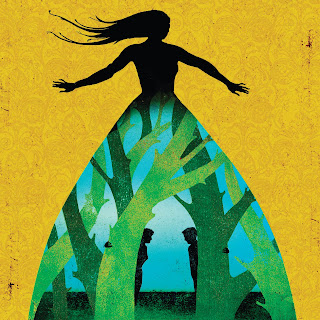 A MONTH IN THE COUNTRY

The current Soulpepper production of A Month In the Country is not to be missed. Turgenev’s classic Russian dramedy takes the subtle social comedy of Chekhovian delight and pushes the dramaturgical envelope into intergenerational titillation and high-spirited frolicking in a setting that could be your Kawartha Lakes neighbour’s country cottage or a summer camp for dysfunctional family units.

The contemporary translation by company member Susan Coyne, in collaboration with Hungarian master director Laszlo Marton, may seem awkward at times as it sports clearly Canadian/North American dialogue, and yet, in the hands of a superb cast the frequently formal phrasing and the long Russian names come trippingly from the tongue.

Costumes by Victoria Wallace and sets by Andrei Both support this action packed piece with a summery, causal offhand grace - replete with half a sports car jutting form a multi-doored back wall, working water hoses, heavenly hammocks, skateboards, and a delightfully devilish tire swing.

Nancy Palk, William Webster, and Joseph Ziegler give standout performances as their brief scenes of romantic misadventure possess an almost tableau-like performance art quality, setting them apart from the rest of the action and rendering the overall mise en scene quirky, complex, and utterly charming.

Too numerous to mention, the entire ensemble provides this timeless script with the complexity of emotion and raw physicality essential to a successful production of a script that could have easily become overly sentimental in the hands of a less physically inclined and sexually invigorated company of artists. On ‘holiday’ in the hands of a playful and dramaturgically proficient director the entire production team basks in the glow of mesmerizing midsummer madness.

Director Laszlo Marton has whipped his cast into a fun filled frenzy as they utilize every square inch of the stage with wild abandon, giving into, what Soulpepper Associate Artist Paula Wing so aptly calls, in her program notes, “the sudden, shocking, fierce experience of love: original, sometimes brutal and always unforgettable.”

A MONTH IN THE COUNTRY RUNS AT THE YOUNG CENTRE FOR THE PERFORMING ARTS (DISTILLERY DISRTICT
Posted by bette at 7:16 AM No comments:

running at the Young Centre (Distillery District) until July11th

It is rare that one gets to see the perfect comedy and the perfect cast in action, on stage, and appearing to love very minute of their madcap ride through a classic Canadian script. I first saw David French’s Jitters in the seventies, when I was toddler (a twenty something toddler) and had such fond but vague memories of this riotous pay within a play about the adventures of a range of actors, at various stages in their careers, rehearsing a new Canadian play with the possibility of a Broadway production. The script is rife with references to the plight of even the most successful actors in this country who play the daily game of wondering if they will ever be able to move beyond the confining theatrical borders of a vast plot of land comprising a rather ‘small’ under populated nation. OHHHH Canada!!!!!! I could drink an icy keg of you!

The cast is impeccable. True to form, there is not a dull edge in the Soulpepper ensemble, showing audiences that English Canadian theatre has managed to indisputably prove itself within its own borders, and yet the struggle for international recognition remains a timely message.

Ted Dykstra’s direction infuses this lengthy two intermisssion’ed, 2 and a half hour piece with an utterly engaging, breakneck, and lighthearted breeze that wafts through the theatre filling our hearts and minds with mostly comedy and lots of thought-provoking innuendo that makes us proud - and nervous - to be Canuckian.

Sets and costumes by Patrick Clark possess a fabulous 70’s Brady Bunch quality and the act two backstage environment reveals a number of subtly integrated tributes to past, present, and ongoing Canadian theatre luminaries such as Bill Glassco and Mallory Gilbert - scribbled on the walls of the ramshackle dressing room with the pivotal faulty lavatory door.

This is a must see this summer at Soulpepper. Jitters takes stereotypical Canadian identity and turns it on its head, revealing just how polite, loving, enraged, talented, and truly hilarious we can be when we find ourselves in yet another escapade of international import.

announced the second off ering of the company’s Lab Series - Anton Chekhov’s The Cherry Orchard. Soulpepper’s

profoundly rich tapestry of text and create theatre that challenges and entertains. This exploration of The Cherry

and activation of any text. Brooks chose The Cherry Orchard because of its superb text that demands (and rewards)

rigorous exploration and for its timeliness - a family in fi nancial crisis, a mortgage they cannot pay and a way of

The Cherry Orchard runs July 1 - 10 at the Young Centre for the Performing Arts, located at 55 Mill Street, Building

49, in the Distillery Historic District. Tickets are $20 plus HST and are available by visiting www.soulpepper.ca or