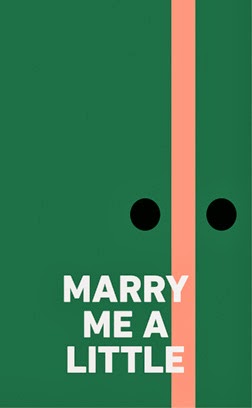 The current Tarragon Theatre production of Marry Me A Little is a pastiche of past Sondheim songs set in a generic apartment with a generic couple saying generic things to each other, all in song. The score is relentless and always delightful, with a variety of forays into romantic discord and angst'y melancholy. It is a thoroughly entertaining evening of song brought to life by two very skillful performers. But where have all the sex scenes gone to - in a play about, well, two very attractive people sharing a very small apartment? Go figure.

Elodie Gillett as She and Adrian Marchuk as He are equally matched as they lend a beautiful range of melodic power to Sondheim's complex and astonishing songs, replete with the complicated - simultaneously whimsical and weird - rhyme schemes, and his signature mixture of dark and light tonal qualities. Marchuk does, at times, seem a little restrained emotionally, and yet his energetic phsyicality, as he bounces around the stage, in and out of bed and back and forth across a studio apartment space, keeps one's interest intact. Gillett is equally watchable, and yet there are times when the diverse range she has been directed to share sounds a  bit like an audition for light opera - and vocals akin to the role of Johanna in Sweeney Todd appear at particularly unexpected moments.  Had She shared a budgie or a canary or a caged sparrow or some random flying pet with He, and found loose narrative provocation to sing Green Finch & Linnet Bird this might have worked in her favor. As it stands this dysfunctional couple simply share a bewildering potted plant, and  Gillett's character frequently comes off sounding beautiful but out of her condo'ized element.

But perhaps that is part of the premise for Marry Me A Little, as Craig Lucas and Norman Rene took a variety of Sondheim songs and loosely strung them together within a contemporary setting. The naturalistic surroundings may seem a little incongruous to some of the high notes Gillett reaches, and yet this is musical theatre and naturalism does tend to fly out the window at the outset. And part of the point, perhaps, of this Jukebox Musical* - framed by a meta-theatrical device that flirts with a surreal sense of what if and what might have been as beginning middle and end all come together in the finale - is the unpredictable and detached nature of modern love. So if this is the case then one cannot help but wonder why director Adam Brazier chose to create such a bourgeois 'ey version when a titillating, even mildly porn'ish same sex seventy-five minute escapade might have added timely and provocatice notes to the overall mise en scene. Brazier moves his actors well and has them occupy the entire space with diverse agility, but the meat of the movement is seriously lacking.

The bedroom scenes, clearly gestures toward the couples sexuality, never really take off, even though He goes to great blocking pains to get in and out of his daywear several times and into more slumbery attire as he nestles his head in she's lap as they lie together on their cushy pullout couch.

The Music is gorgeous, and the singing superb, but perhaps the most superb, somewhat unsung performer among them is the mostly invisible piano player, who appears, literally, out the window. Pianist and Associate Musical Director Scott Christian becomes an intriguing meta-theatrical persona who joins the cast at the end after acting, throughout, as a majotr cohesive agent for the singing duo. Had musical director Paul Sportelli and Adam Brazier collaborated on a sexy and vibrant version of an old chestnutty buffet of Sondheim, then Marry Me A Little might have been loved a lot more.

As it stands it is delightful, at times musically moving, yet limited in its potentially wider, more theatrically magnanimous appeal. 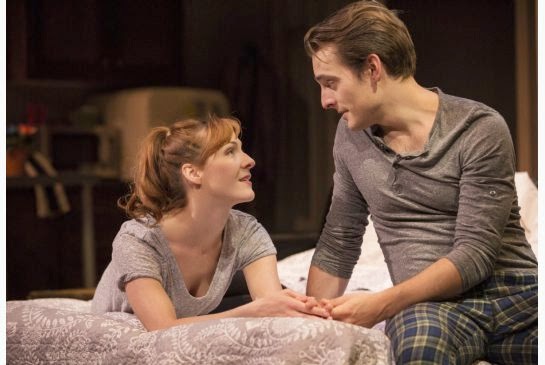 MARRY ME A LITTLE
RUNS AT TARRAGON THEATRE
UNTIL APRIL SIXTH 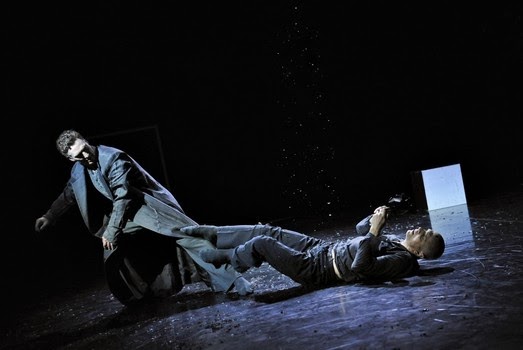 
Choreographed and performed by

The Four Seasons, featuring Robert Glumbek and Kevin O'Day, is a stunning exploration of aging, friendship, homosocial bonding, and the immense humour, goodwill, and virtuoso choreography two men can share over the course of a one hour program.

Accompanied by Vivaldi's famous set of four violin concertos, the piece quickly becomes a diverse journey through performance technique, a creative use of stage props, tightly focused video imagery, and gorgeous movement. A brief moment of nudity, with bodily projections, is simultaneously titillating and humourous as the two middle aged men allow affirmations to be projected
onto their flesh in a shadowy playing space. The voyeurs among us may have been somewhat disapointed by the brevity of exposure, and yet one could not help but be entertained and refreshed by the daring humour of two men willing to bare it all - or at least partially - in order to reveal the playfulness their collaborative creation embraces as it approaches the span of a lifetime with sincerity, vigor, and good fun.

Perhaps the most moving element of the evening occurred whrn Glumbek and O'Day assisted each other atop a collection of very versatile wodden cubes. Reaching for an elusive tree branch with each others help, the physical intimacy and heartfelt support of two men in love with life came through in poignant and emotionally expressive ways. Together and apart, both dancers displayed rigorous and beautifully executed moments of strong choreogrpahy that frequently possessed affirming, quirky, and unique intircacies of mind and body - never for a moment letting us forget that these are mortal, timeless corporeal entities interpreting movement and emotion as they move through the metaphor of four seasons as a series of longings, desires, trials, and delights.

THE FOUR SEASONS RAN AT THE ENWAVE THEATRE, HARBOURFRONT,
FROM MARCH SIXTH UNTIL MARCH EIGHTH
Posted by bette at 8:45 AM No comments: The Alberta Theatre Projects/Theatre Passe Muraille co-production of Same Same But Different, written and performed by Anita Majumdar, co-starring Nicco Lorenzo Garcia, is a multi-layered text brought to life by the physical skill and vivacity of two gifted performers. Tackling complex questions regarding race politics in Bollywood cinema, Majumdar crafts two separate, yet connected stories of independent figures brought together within the studio settings of a huge, at times unwieldy film industry. The intimacy of the performances belie the broad expansive quality of many Bollywood films, and might have been better served through the use of film projections and more explosive costuming. And yet the script is so filled with humour, insight, and emotional journeying that one cannot help but come away from the experience with a strong, detailed sense of how individual lives figure into the much larger world that the film industry often caters to in order to gain a global audience.

Majumdar has taken the lives of four individuals caught in social and cultural mechanisms that have little regard for the intricate details of their lives as they strive to achieve some small sense of notoriety in their chosen fields. Nicco Lorenzo Garcia is able to simultaneously balance romantic engagement with political import as he juggles a love of art with a need to escape from a frequently restricting social and artistic environment. Anita Majumdar matches her co-stars talent with an engaging and diverse physical and vocal performance that displays her impressive talents as actor singer and dancer.

Ultimately, Same Same But Different reveals just how ordinary particular aspects of seemingly glamourous movie sets and recording studios can actually be as the intimacy of theatre explores the vastness of film. Majumdar's script is a daring and evocative exercise in storytelling that lays bare the structures of racism that may go unnoticed by a general viewing public, yet affect the everyday lives of people working hard to fit into the Bolly/Holly wood paradigms set up for them to inhabit, represent, and rebel against.

About the Show
Infused with the rhythm and passion of Bollywood music and dance, Same Same But Different is comprised of two intersecting stories that take you behind the scenes of Indian cinema.
In the first story, Canadian-born Bollywood starlet Aisha confronts her own prejudices about nationality, skin colour and family — and realises that her dreams of stardom won’t come without sacrifice.  The second explores the story of Aisha’s mother, Kabira, and her own life-changing encounter with the world of Bollywood.
Posted by bette at 3:07 PM No comments: 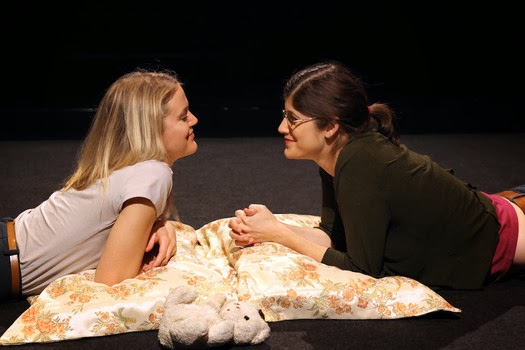 Volcano, in association with BeMe Theatre (Munich), has mounted a remarkable production of Daniel MacIvor’s play A Beautiful View. Earlier incarnations of the script presented a subtle yet complex relationship between two women that moves through a series of engaging encounters - appearing random on the surface, yet revealing the circuitous route one’s sexual and social energies can follow once confronted with strong bonding agents and coincidental meetings that frequently end up being less based on chance and more prone to the quirky somewhat obsessive tendencies of an ardent admirer. Becky Ross and Amy Rutherford, under the intricate direction of Ross Manson, infuse this exchange with physically diverse performances that are both daring and delightful. 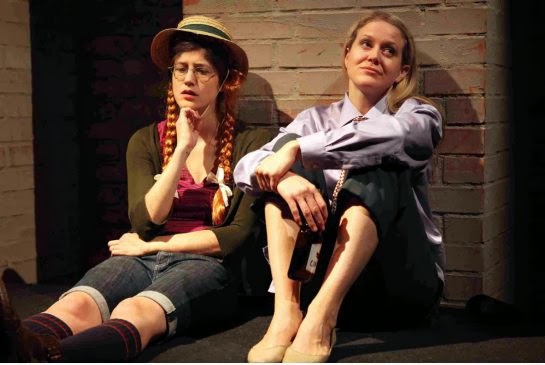 Ross has a unique and thoroughly committed stage presence as the idiosyncratic character in search of an ever elusive romance. Amy Rutherford is able to play off of Ross’s layered vocal and physical mannerisms with a strong sense of a rooted personality tempted by and complicit with the wilful wiles her cohort manages to employ through a sixty-five minute journey. Both performers create memorable figures lost in a wilderness of misunderstanding, libidinal curiosity, and sincere affection for each other as they explore various ways of loving, leaving, and returning once again to the outdoorsy scene of their original meeting. Replete with endearing songs that verge on a kind of corniness essential to their floundering romance, the two women possess a versatility and poignancy that strengthens their every onstage move. 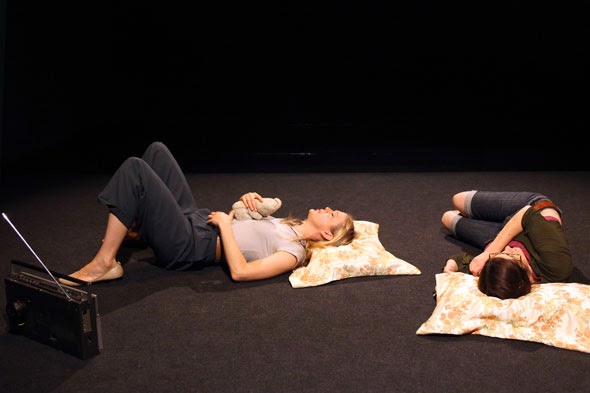 One of the many strengths of MacIvor’s script lies within the range of emotion that mixes with a sense of never quite knowing precisely what this duo are actually searching for. But they are crafted so expertly and placed so ingeniously in a series of short scenes that one is left with a very strong sense of having born witness to a beautiful view of two ordinary women surrounded by less than ordinary circumstances. Volcano, under the direction of Ross Manson, takes this quirky, frequently fraught emotional vista, and layers it with enormous skill as the lighting, sound, and very simple setting allow for a deeply expansive glimpse of heartfelt, at times mystifying human interaction.

RUNNING AT FACTORY STUDIO THEATRE UNTIL MARCH 9TH
Posted by bette at 2:07 PM No comments: