LOVE, LOSS, AND WHAT I WORE 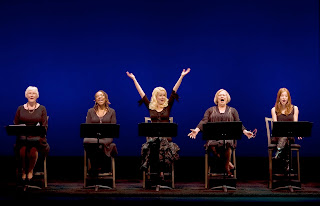 Love Loss, and What I Wore

Originally intended as a nostalgic souvenir for friends, Ilene Beckermans’s book Love, Loss, and What I Wore has become a huge theatrical success story as a vehicle for a diverse collection of actresses to gather together and tell stories about women and clothing, stories that both tug at the heart and entertain with great comic finesse.

Adapted for the stage by Nora and Delia Ephron, this collection of monologues and interactive dialogue is reminiscent of The Vagina Monologues as it presents five performers lined up onstage, all in black dresses, and reading these tales from simple podiums. The simple and direct staging highlights the storytelling quality but doesn’t restrict the superb theatricality as performers move seamlessly in and out of memorized and read dialogue, adding their individual acting talents to each new narrative.

Stories range from heart wrenching tales of rape and breast cancer to lighthearted memories of what it’s like to wear a bra. In the current incarnation Mary Lou Fallis, Canadian operatic singer/comedienne extraordinaire, performs a single line from the hilarious brassiere segment with great diva-esque flair, while the entire ensemble does a Madonna clothing riff with impeccable timing and great ‘girlpower’ as memorable lines are sent out to an empathetic and thoroughly engaged audience.

“Any woman who says she has never dressed like Madonna is either lying or Amish.”

“I made out with a bunch of gay men.”

Whether they are reflecting upon the influence of a spectacular pop icon and her bold fashion sense, letting us in on the secret life of a not so cherished purse, or interrogating the omnipresence of black as a favored hue for frocks, the five women onstage are a fabulous example of the kind of storytelling that universalizes gender experience in a very special way, moving beyond the theatre and into the hearts of women in their daily lives.

A portion from proceeds from some of the productions benefits the ‘Dress for Success’ charity, providing work clothing and job support for low income women. The production gives actresses and audiences the opportunity to experience women’s stories in a simple, direct, and refreshing way that highlights the physical and emotional presence of a range of extraordinary performers who have made their marks, and continue to, in the entertainment world. Lisa Horner recently finished a run in the highly successful My Mother’s Lesbian Jewish Wiccan Wedding, while trey anthony holds the distinction of being the first Black Canadian woman to write and produce a television show (da’ Kink in My Hair) on a prime time Canadian network. Da’ Kink in My Hair was already an award winning piece of Canadian theatre before becoming a popular series. All of the actresses involved in Love, Loss, and What I Wore bring their own success stories to the stage as they create an ongoing ensemble of powerful women sharing powerful tales.

THE CLOCKMAKER NEEDS A LITTLE WINDING

The Clockmaker is a charming and alarming little play about broken moments, domestic abuse, keeping time, and ending up in the same place long after you've stopped your watch and had your day. The current Tarragon production of Stephen Massicotte’s new drama, directed by Bob White, clips along at an uneven pace that effectively highlights a kind of stylized acting appropriate to this fable of sorts. Unfortunately the ensemble, although skilful in their delivery and physical nuance, is not entirely consistent with the allegorical overtones, thereby rendering the drama a little uneven, and the final pivotal moments somewhat anti-climactic.

Damien Atkins as Monsieur Pierre and Christian Goutsis as Herr Mann deliver stylish, subtly melodramatic performances suitable to this simple tale of love and poorly timed mayhem, with Claire Calnan presenting a charming and emotionally nuanced Frieda, the hapless wife who wanders into the clock shop in need of repair. Kevin Bundy’s portrayal of Adolphus however, although proficient and physically powerful, tips the scale in an unexpected direction as he appears to be in a more realist version of the drama at hand, contrasting uncomfortably with the ‘fairy tale gone terribly wrong’ style of the play.

Nevertheless, The Clockmaker is a thoughtful and provocative drama with moments of dark comic respite and reward for four characters trapped in an untimely dimension.

THE CLOCKMAKER RUNS AT TARRAGON THEATRE UNTIL OCTOBER 24TH

Two things to remember when you see the current Buddies In Bad Times Production of Blasted;

1/ when the stage directions frighten you, you know you’re in for a terrifying and visceral ride in the country

2/ when the stage directions seem impossible to actually produce, and you know the director has a knack for making the implausible look very real and very frightening, you’re in for a terrifying and visceral ride in the country

Initially perceived by critics as a vulgar piece of shock value theatrical warfare, the play has become a contemporary classic that is truly Shakespearean and extremely queer as it moves through a series of extended tableaus, with sex, dialogue, and man to man lusty brutality that shakes the flaming stick at cross-cultural homophobia in a striking and complex manner.

As social commentary Blasted achingly reminds many of us of our privilege, and how that privilege can be literally shattered and torn apart, from the outside in, even when we are feeling safe inside pricey lodgings.

Daivd Ferry as the lead male character is superb as he delivers a breakneck performance . His interpretation of Ian, the gun wielding rebel without a cause, is a truly mesmerizing portrait of how skewed romantic notions of love can include abuse, racism, and, well, lets keep the worst part of his appetites a secret for the faint of heart. Ferry is a superb interpreter of the physicality of this complex monster, and manages, against all odds, to bring depth and seamy, questionable substance to a shallow and deplorable character.

Similarly, Michelle Monteith’s Cate is an exquisite mixture of childish, traumatized femininity that knows how to survive in the worst situation imaginable. Although a much smaller part than the two principles, Dylan Smith’s Soldier matches, measure for measure, his co-stars craft with the crucial violence of the piece as he rounds out a three hander ensemble that has pulled out all the stops, giving the audience close to tow hours of stomach churning action packed misadventure

The tendency to write this play off as a vulgar piece of gratuitous stage indecency is reductionist at best. Kane’s ability to create profound socially conscious moments throughout seem timeless as they remind us of every global atrocity-cum-conflict we hear, and see image of, through daily media accounts. Kane has given us those accounts in a meta-theatrical way by crafting a journalist character into a psychopath who balks at the kind brutal reality that his public doesn’t care to read about.

But there is a a price to pay for the casual ways in which culture ignores what is right in front of us. By literally inviting us in through the back door of the theatre, the Buddies production brings it all into our collective living rooms as a captive audience, thereby living up to every grueling moment of Kane’s relentless dramaturgy. We are left breathless and overwhelmed by superb acting skill and superb drama as we laugh, cry, cringe, squirm, and finally file out of the beautifully designed battleground and back into our own little televised lives.

Ronnie Burkett’s newest show, Billy Twinkle: Requiem for a Golden Boy, currently running at Factory Theatre, is a queer spectacle of autobiographical proportions. Burkett may not have lived exactly the same life as his protagonist, but the potential similarities are impossible to miss as the title character guides us through the remarkable life of an acclaimed marionette artist from humble prairie beginnings who struggles with a variety of problems regarding his identity as an artist and as a man.

As a designer, actor, and writer, Billy grapples with his position as a cruise ship entertainer, and early on in the show, becomes dissatisfied and disgusted with his audience. This is perhaps the boldest, most meta-theatrical, and funniest aspect of Burkett’s new show, and sets the stage for a daring exploration of the relationship between the artist, his fans, his mentors, and his creations. The humour is contrasted and blended with sharp moments of homophobia as Billy, and Burkett, directly rebuke invisible spectators for homophobic remarks. The puppet and the puppeteer become larger than life examples of the risks a queer performer takes every time he or she sets foot onstage and faces the possibility of an insensitive, potentially queer bashing audience.

The term faggot surfaces early on and begins Billy’s unsettling journey from creative boy to brilliant young man, ultimately finding himself in the position of an older mentor to a younger generation of marionette artists. As the recipient of the 2009 Simonovitch award for design, Burkett has reaped the benefits of collegial acclaim and has been able to encourage new talent as part of the award. The prize comes with a $75,000 cash component as well as another $25,000 for the winner to give to an aspiring artist of their choice

Billy Twinkle possesses all of the same stokes of genius that Burkett has amply revealed in past shows. The beautifully rendered songs (with music by John Alcorn), the gorgeous costumes and characters, the gloriously irreverent animal puppets - but the difference in this show is the incredible scope of the text. All of Burkett’s scripts tend to deal with large world issues, and yet, as a somewhat auto-biographical text, this one is perhaps the queerest and the most ambitious, as it tackles ideas around the distinctions between fine art and popular art, sexual identity, and even inter-generational desire in one uncomfortable and beautifully rendered scene between Billy as a young man and an older spectator who invites him to his hotel room after a show. But even when Burkett moves into these difficult spaces around identity he does it with such sensitivity that it moves the message into a broad world of love, creativity, and desire.

Billy Twinkle is a tour de force that sparkles with all the intensity and glamour of human triumph, indignity, and the brutal, often rewarding decisions artists are forced to make when they commit themselves to lives in the theatre.