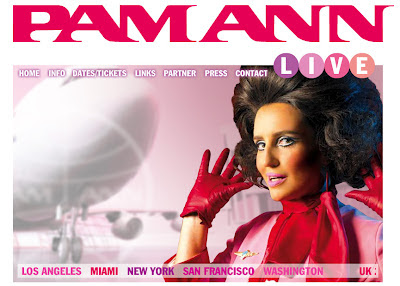 With the breakneck, rapid fire pacing of a Joan Rivers, the deliciously potty mouth of a Rusty Warren, and all the bitchy nuance of a seasoned drag queen, without the drag (she's a real live girl) comedienne Caroline Reid's alter ego, Pam Ann, the over sexed flight attendant with a vengeance, takes the stage for almost two hours and keeps her audience in stitches from start to finish. 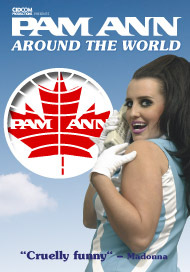 All of the classic comparisons can be made, from  Rivers to Warren, with dashes of Ab Fab and Miranda thrown in. But the refreshingly profane originality of Reid's fabulous character shines through by way of a down to earth, in your face, deceptively semi-apologetic warmth and spontaneity that softens the bite for a split second, only long enough for her to come back with an even more direct and tasteless remark that riles - and ultimately wins over - the spectators consciousness with a brand of backhanded social critique that some great comediennes lack. Pam might lovingly tell you you're an idiot, but she rights back at you with some hot and heavy self-deprecation that will curl your pubes. Her subtle connection to the the comic strategies of another hilarious Australian jokester, Dame Edna Everage, are not lost on anyone familiar with an international stage littered with globally irreverent "bitches."  As Edna would say, Pam "meant that lovingly, not the way it was intended."

Reid, as Pam, knows she is touching on sensitive material as she brazenly and skillfully devours racial stereotypes with a razor sharp consciousness not unlike Russell Peters and Shaun Majumder, but with a decidedly more feminine brand of over the top fuck you presence that tosses her own Australian origins into the mix as she butchers every nationality she can manage to get her acid tongue around. 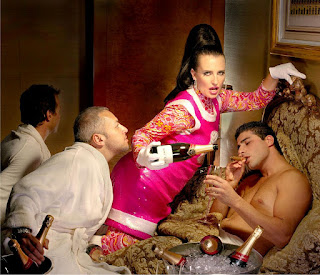 Touching down on everything from Princess Diana, Luka Magnotta, and that poor canine creature caught on the Gardiner Expressway the other day, Pam peppers her action packed show with plenty of Canadian content and lots of Westjet and Air Canada jokes.  The audience participation is relentless and the scathing queer friendly innuendo is divine as she sporadically ad libs her way through a tightly structured routine that makes plenty of room for off the cuff interactive hilarity.

Priceless video interludes that have spliced Pam's antics into classic Superman films are a truly wonderful little sojourn into airplane disaster scenes from the past, while the sheer subtle comic nuance of a whacky onstage dance rounds out a remarkable comic performance that leaves the audience simultaneously shocked and bursting with laughter.

Not to be missed, Pam Ann performs nightly at the Panasonic theatre until  June 23rd. 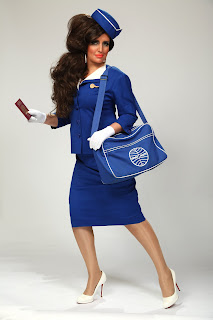 "So shut the F**k up, sit the F**k down, lock your seats in the upright position and prepare for the ride of your life." 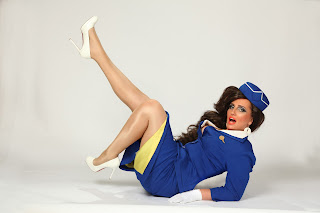 PAM ANN – AROUND THE WORLD jet sets into The Panasonic Theatre Toronto.