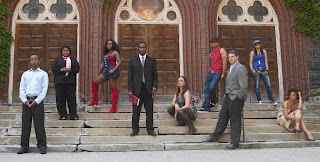 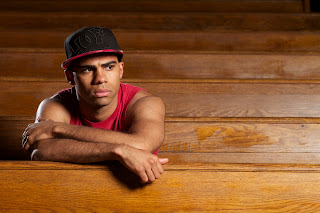 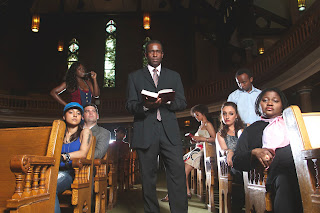 The recent production of AWAKE, produced at the Toronto Fringe Festival, was a moving and ultimately exhilarating journey through a series of stories based on the experiences of people living in Toronto’s Jameston/Rexdale area. Inspired by the 2005 killing of Amon Beckles, shot in a church during a funeral service, the play relies upon a series of narratives recalling events leading up to the moment of violence. One very telling moment early on subtly reveals late twentieth-century socio-economic developments that contribute to the creation of a community of people disenfranchised by a racialized past, and present, that once appeared, on the surface, to be hopeful and filled with promise.

A lot of these townhouse complexes were built back in the 60s, back when everybody was um, American families, you know what I mean. It would all be young families, men work, wife at home with a couple kids, everybody's kids playing, it just must have been utopia.

Part of the power of the recent production can be attributed to the incredible site-specific nature of the surroundings. Set in the midst of a funeral, the Fringe venue was the Walmer Baptist Church, set on the edge of a traffic roundabout with a serene parkette commemorating the life of Canadian poet Gwendolyn McEwen as an urban centre piece. On the memorial plaque below the bust of McEwen, an excerpt from one of her poems makes an indirect and poignant connection to the play’s tragic yet life-affirming narrative.

But it is never over; nothing ends until we want it to.

On black ice under silver trees,

we are still dancing, dancing.

Meet me in an hour at the limits of the city.

Despite the great sense of tragedy of losing family members to gang violence, AWAKE never loses a powerful sense of hope and spirituality that infuses the piece from start to finish. Led by the powerful, encouraging words of a member of the clergy presiding over the funeral (played with convincing fervor by Richard Stewart), the play moves in and out of the church setting through vivid tableau scenes that depict moments from the lives of the young men being mourned. Gospel music and hip hop enhance each story and each tableau with a pervasive strength that moves the work to its surprisingly joyous climax.

The ten artists who comprise the ensemble cast are flawless as they collaborate in a multi-disciplinary manner through the use of stylized movement, dance, song, and impressive acting skill. Ultimately, the stories are brought to life through the eyes of mothers trying to deal with the unimaginable loss of a child, and the complex socio-economic events that conspire to trap innocent young people within a cycle of violence and crime.

Quancetia Hamilton and Beryl Bain as the two mothers deliver strong, layered, versatile performances, assisted by the amazing collaborative work of Tazz Blaze (dancer), Raffaele Brereton (dancer), Lauren Brotman (actor), Muoi Nene (actor), Peyson Rock (actor), Richard Stewart (actor), David Shelley (actor), URV (singer/rapper). Writers/directors Laura Mullin and Chris Tolley have assembled a cast and a production team that were able to inhabit a gorgeous old Church in an affluent neighbourhood and blow the roof off of the layers of society that AWAKE attempts to peel away in order to expose the roots of the problems people face when confronted with extreme poverty.

The intricately staged, verbatim interviews that are the foundation of a script taken from hundreds of hours of recordings, represents a detailed and significant tribute to young lives lost, and the family members and friends who move forward despite the disheartening situations they live within.

The final lines attest to this great sense of survival within a community ravaged by violent crime.

What I enjoyed the most was the way everybody was able to get up and be free. If you wanted to cry, you cried. But most of us, by the time the funeral service was over, nobody had a tear in their eye. That’s what I wanted. I didn’t want it to be too sad. It was sad enough, these young people didn’t need to bury that much pain.

As the audience filed out of the Church, a sense of displacement, and a form of conflicted, bittersweet peace filled the air. Considering the final lines from MacEwen’s poem (Latesong), as they suggest a tragic rupture, mixed with a beautiful, elegiac quality that attempts to bring disparate social and emotional narratives together as a way of bringing powerful stories to wider audiences:

exhausting music--- I will remember only

to warn me of the world’s end

As wild leaves fell, and midnight crashed upon the city. 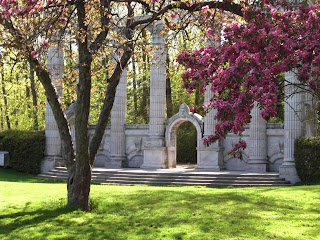 The current production of The Cherry Orchard at the Guild Festival Theatre is a truly unique outdoor experience. Elegant costumes by Bonnie Deakin and atmospheric lighting by Amanda Gougeon provide crisp characterization against the moody grays of an imposing background replete with grand sculpted arches and spectacular chiseled columns. Scenic design (consultation) by Troy Hourie, comprised of pieces of antique furniture set sparingly across the playing space, floats in a kind of classical Greek milieu as Sten Eirik’s direction provides a lively, fast paced spectacle that brings the essence of Chekhov’s pastoral bourgeois drama to life. The Russian playwright's particular brand of dramaturgy runs the risk of becoming a slow moving dirge if it is not directed with an ear to the highs and lows of panicked family members going through a myriad of emotions once threatened with the loss of their ancestral home. Eirik has found a lovely balance between light comedy and class-based tragedy, essential to the success of Chekhov’s lyrical interrogations of the demise of a decidedly aristocratic way of life. Music by David Buchbinder gives the overall production a subtle melodramatic tone that suits the grand setting and provides the production with a powerful ambience. 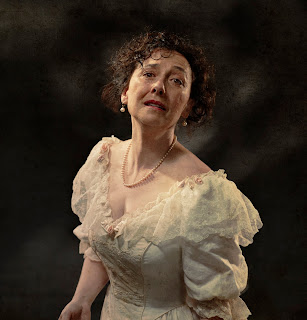 Dawna Wightman as Lyubov leads a cast that shines as they blend a form of flighty comic realism with lilting playful physicality that has them cavorting around a gorgeous outdoor space that was originally assembled in the 1960s from pieces of old Toronto buildings about to be torn down. This curiously bedecked setting provides the perfect environment for a play about a family who are rapidly losing their sense of history and have assembled one last time in a futile, yet loving attempt to hold what is left of their heritage, and their class structure, together. John Jarvis as Gaev injects a kind of careless paternalism into the cast and portrays the perennial billiard-playing brother with great physical agility and a wonderful stylish vocal delivery. Jesse Dwyre's student matches Jarvis’ thespian skill with a variety of studied and engaging moments of romantic play and political aspiration.

Wightman is superb as Lyubov as she mixes a happy go lucky, scattered quality with a form of altruistic passion that culminates in powerful and moving speeches defining her great attachment to a home and a past she can never fully retrieve, yet longs for through a form of traumatized melancholia. Paul Amato’s Lopahkin complements Wigthman’s performance as he coddles, persuades, and finally surrenders to her double-edged frivolity in a way that ultimately self-satisfies his own great business acumen. Rounded out by consistently delightful performances by Kanika Ambrose, Linzee Barclay, Tamera Broczkowski, Melissa Haddad, Stephen McLarty, James Patrick Pettitt, Bryan Stanish and James R. Woods, the large ensemble cast manages to bring the intricate plot and characters to full fruition as they move toward the end of an era in Russian history, represented in Chekhov’s drama by a single family’s attempt to tie up loose ends before they go their separate ways. Perhaps the most memorable performance comes from Bryan Stanish as Firs, the long suffering, somewhat senile manservant who represents all that is left behind by the rather chaotic ramblings of a family and a social hierarchy in ruins. His performance punctuates the pathos that runs through the narrative as he skillfully fumbles through the maintenance of a family out of sync with the times and utterly beyond repair. 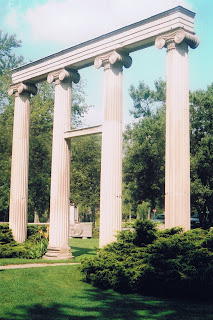 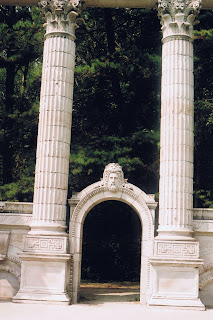