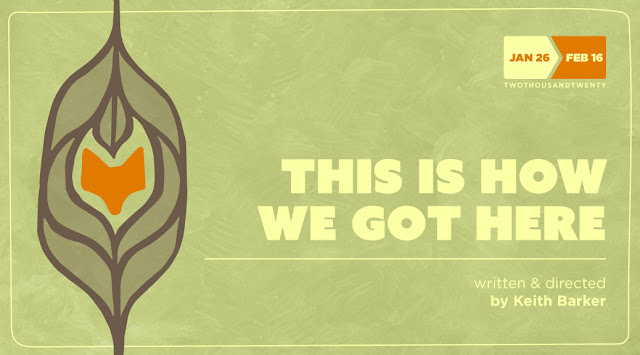 I tend to avoid the word when talking about this play - mostly due to people’s discomfort with it. Often, in response to their reaction to the play, I say, “but it’s also funny” which, let’s face it, further complicates things. 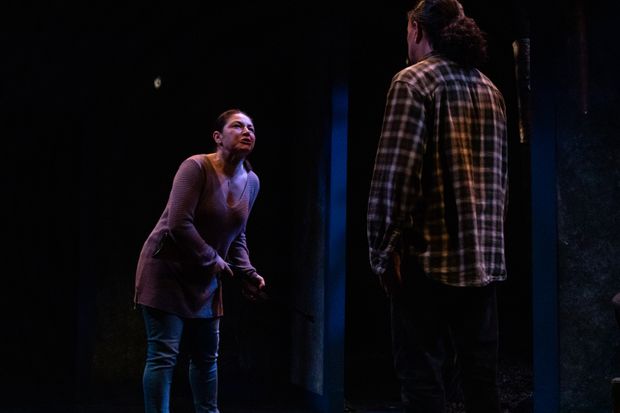 Keith Barker’s critically acclaimed play,’This Is How We Got Here’ - a finalist for the Governor General’s Award in 2018 - possesses a comic elegance that underscores the profound tragedy at the heart of the story. A gifted ensemble of actors, under Barker’s direction, are able to take the subtly crafted, fast paced dialogue and find the eloquence and the poetry, the lighthearted and the sorrowful of day to day conversational strategies of people in the throes of prolonged grieving. Something almost Chekvovian, in part domestic drama, as characters stumble through the smallest details of their daily lives, often avoiding the over-arching burden of past trauma.

Kristopher Bowman as Paul has a softly powerful vocal range that gives the character an engaging presence and allows his sorrow to smoulder throughout, rising and falling with bouts of dignity, distress, and disappointment from one moment to the next. Michaela Washburn as Lucille matches this subtly and powerfully, bringing moments of great authenticity and grace to a woman barely able, yet consistently trying, to cope with what life has given her. Tamara Podemski’s Liset offers a sharply contrasting portrayal as the concerned sister, and creates a character filled with both physical and emotional power as she struggles to help her family through ongoing emotional crises. James Dallas Smith as Jim becomes a frustrated, supportive and compassionate uncle ultimately administering to a lost soul who stands at the core of the narrative.

And then there is the much discussed yet unseen fox, a recurring ‘character’ providing both comedy and sadness from start to finish - ranging from a garden menace to a symbol of hope and spiritual retrieval in the midst of loss. The story of fox, sprinkled throughout the play effectively fractures and unites various threads, similar to the ways in which Barker has dismantled and re-arranged the time frame, bringing us in and out of a story at contrasting moments, toward an unexpected ending that promises hope and comfort through the memory of a love that could not be sustained.

There is a beautiful elegance in the structure of Barker’s play. He fractures narrative like the moments of a fragmented memory, giving his characters great moments of conflict and daily detail that creates both comedy and pathos. There is a scene dealing with ‘fruit’ that resonates deeply within a friendship that reveals itself as both complex and filled with self doubt - both quirky and comic in its repeated identity squabble. Barker does all of this in a deceptively simple set of conversational scenes, split by the presence of an elusive and mischievous creature. Ultimately he deconstructs story, allowing an audience to be constantly engaged in the broken aspects of a timeless drama regarding familial love and the relentless aftermath of sudden and inexplicable tragedy. He shows us how his characters got there, to the places they were, the places they are, and the places they may be by bringing all of the pieces together.

A riveting drama, with complex and contrasting comical moments that turns the teacher student relationship inside out and provides post modern strategies that give no easy answers but lots to consider.

Alice Snaden and Matthew Edison are compelling as the blighted 'couple' who traverse a circuitous route through the confusion, the betrayal, and the multi-marriage/family/fidelity discourse that attempts to hold one man's self-fractured life together in the face of his own greatest obsessions - and ensuing lack of self-restraint under the guise of 'love' and all its pithy foibles.

Given the fact that the professor character, played with great angst and power by Matthew Edison, utlilizes on a few occasions, complex almost parodic allusions to literary theory, misidentifying the terms performance and performativity repeatedly, the script is at times a bewildering journey through sexual misconduct in the academy and its many implications. It is hard, at times, to take this professor seriously when he refuses, perhaps unconsciously, to take himself seriously. And that may be what the script gets at in what could be an unconscious, somewhat unrealized way when it comes to the complexity, or lack thereof, or particular academic pursuits.. 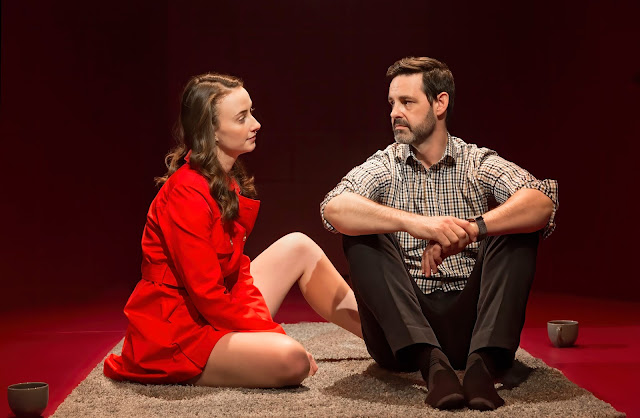 By imposing a self-reflective/referential structural pose within the script, playwright Hannah Moscovitch gives the character of of Annie a deceptively upper hand element as she navigates her role as young student and aspiring playwright. This allows the drama to unfold in an at times bewildering manner. And yet, this may very well be the dramaturgical genius of Moscovitch as she supplies no simple solutions, or even layered resolution by the end of this emotionally demanding two hander. 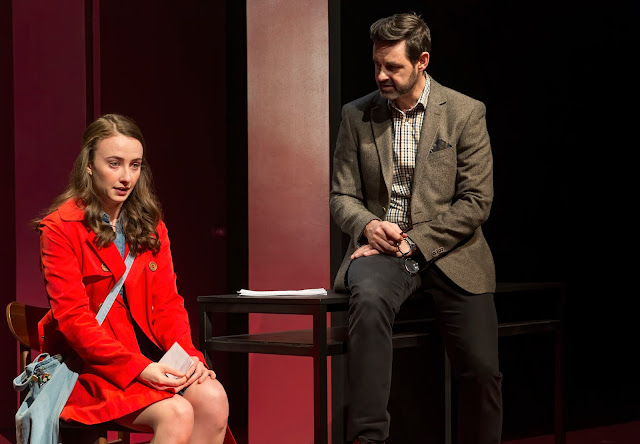 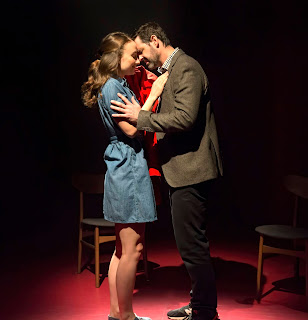 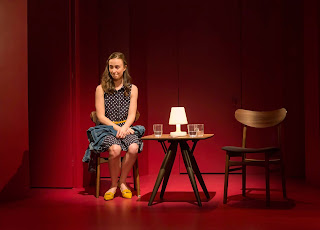 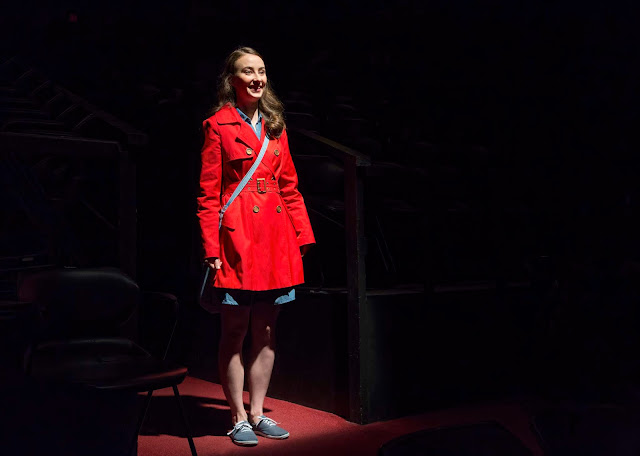 Alice Snaden takes on her role as Annie with great emotional layering as the character moves in and out of the very confusion, attraction, desire, and self-doubt that the power imbalance, initiated by her professor, Jon (Edison), creates at the outset. She moves gradually toward a creative solution/anti-solution that affirms and questions the power of art as a simultaneously healing and hurting agent in the lives of the two people involved, and anyone in the audience susceptible to their own forms of identity crises. 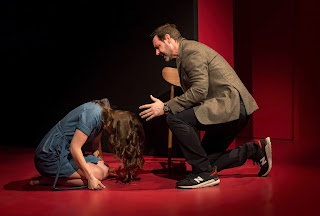 Rife with doubt and self betrayal on the part of the male character, and peppered with both self empowered engagement and necessary retreat by the young woman, Sexual Conduct of the Middle Classes raises many questions through a kaleidoscope of near impossible answers. 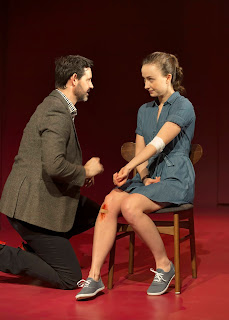 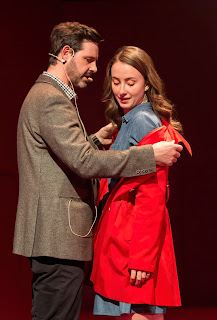 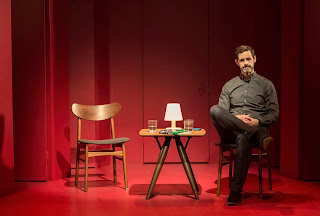 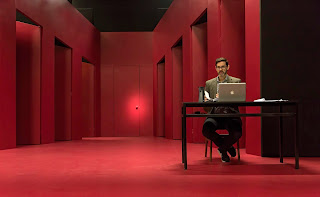