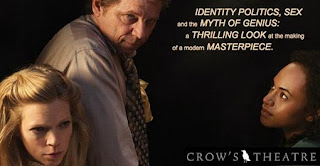 When a couple of English actors, no doubt quite unwashed, decided to gather together the plays of their moderately well-known peer, William Shakespeare in order to publish a first folio of his theatrical work . . . that to me was a moment.

There are many moments of unmistakable genius in the current Factory Theatre re-mount of Anton Piatigorsky’s play Eternal Hydra. And yet, the whole notion of ‘genius’ is called into question in the opening line of this stylish and sophisticated play that was originally commissioned by the Stratford Theatre Festival in 2001. What the playwright has given us is a script that is subtly reflective of the mandate of a festival that commemorates, annually, plays we have come to call classics. And yet, Piatigorsky’s dramaturgy asks the very complex and unanswerable question - are any of these works acts of genius or, rather, citational texts that borrow from other cultures, other voices, re-telling stories over and over again under the guise of originality, and frequently penned by the hand of a lone white-male.

This four-person play, with a frequently confusing yet charismatic doubling of characters, is graced by a superb ensemble of actors. Leading the cast toward a very moving and haunting finale, Cara Ricketts represents the disenfranchised voice of a black woman whose professional talents are appropriated by the hallowed male writer, Gordias Carbuncle, played with great finesse and idiosyncratic vocal work by David Ferry. Lisa Repo-Martell’s presence gives the ensemble a strong authoritative voice and physical diversity for the academic character and the sultry southern Belle, while Sam Malkin rounds out the cast with two distinct, well-defined roles.

Ultimately Etetrnal Hydra mixes race, shoemaking, writing, male dominance, and the canonical, commodity ridden world of publishing, treating an audience to an intelligent and entertaining evening of theatre that throws great literature under a post-modern microscope and repeatedly raises that ever unanswerable query - whose voice is coming from whose mouth?