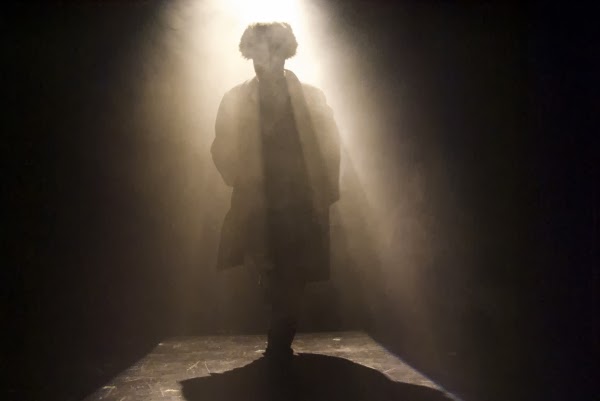 Coming in at two hours, there's not much wrong with the current production of The Double that couldn't be remedied by a prudent edit that reduces the running time by almost half. Too much explication leading up to the fast paced psychological unraveling of the second act make the opening hour a rather plodding journey through the narrative of the Dostoevsky novella. The original story explores the psychological conflict of a single man usurped in his personal and professional life by the aggressive nature of his other, rather split personality. Issues surrounding industrialization, bureaucracy, and the frequently two-sided nature of capitalist enterprise surface throughout. These social concerns might have been better served by a much shorter opening act utilizing imagery and trimmed down narrative that brings the audience to a quick and concise awareness of the central conflict, rather than the arduous, detailed way in which the text has been adapted into two very distinct and unequal parts. 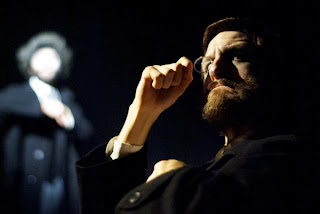 A very skilled cast utilizes physical theatre to great comic effect, yet falter as the opening sixty minutes relies too much on a simplistic coupling of back story and physical mimicry. The second half however picks up the pace, retreats from the Dostoevsky plot line in creative and entertaining ways, and creates the kind of intrigue and theatrical play that the first hour lacks. An especially effective scene has the protagonist in a kind of lounge singer pose as he parodies his plight in an engaging, energetic, and  anachronistic manner that allows spectators to consider analogies to contemporary social concerns within the realm of everyday working lives. 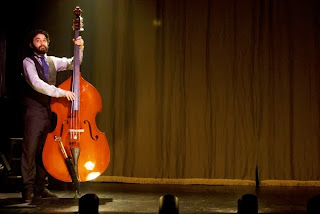 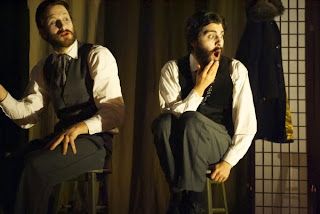 Adam Paolozza, Viktor Lukawski, and Arif Mirabdolbaghi create expressive, physically agile characters who are able to move rapidly through a series of challenging gestures and near acrobatic feats. The parts of the The Double that work extremely well take these physical gestures and incorporate them into a story about one man's alienation from himself and the world around him in a lighthearted, comically angst ridden manner. Unfortunately the opening scenes put too much importance upon the mechanical details of a story that could be told quickly and efficiently in ten minutes or less, and then the action could frolic across the stage from that moment on.

The opening moments with an onstage musician grab the viewer and hold the promise of a fully engaged piece of theatre, but take a sharp turn away from the essential flights of fancy that make the second act of The Double a joy to watch. Melodrama and physical comedy appear to be great theatrical strengths for TheatreRUN productions, and the current Tarragon backspace possesses all of this but falls short in a an opening act that is just too long. 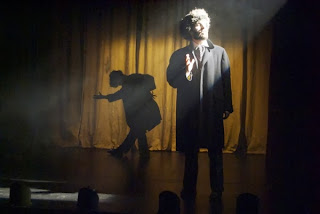 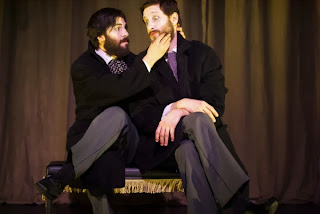 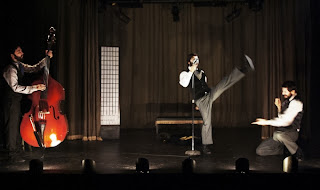 THE DOUBLE RUNS AT THE TARRAGON EXTRASPACE UNTIL NOVEMBER 24TH
Posted by bette at 3:49 PM No comments: 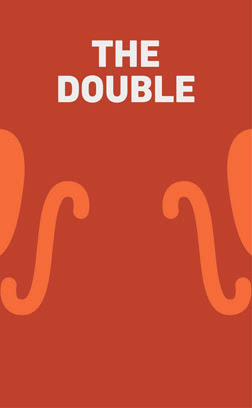 directed by Adam Paolozza
music by Arif Mirabdolbaghi
When are you no longer yourself? The anxious government clerk Golyadkin is plagued by a stranger who looks just like him, but is more daring, romantic and brash. Inspired by Dostoevsky’s novella The Double, this uncanny triangle between a neurotic, his doppelganger and a stand-up bass transports us to 19th century Russian high society and Golyadkin’s labyrinthine search for his identity.
This Dora Award winning production is back on the Tarragon stage. Adam Paolozza is currently Tarragon’s Kareda Resident and Artistic Director of TheatreRUN. Arif Mirabdolbaghi is a Juno Award winning musician and a member of the acclaimed Indie Band Protest the Hero.

- two actors and one musician with a double bass

collide in a schizophrenic feast of site and sound -

The Double combines Dostoevsky's brilliant prose with physical theatre and original music to create a theatrical Molotov-cocktail filled with laughter and pathos.  An exploration of alienation and paranoia, The Double speaks to our own fragile hold on reality in a time when our identity is as fluid as our facebook and twitter profiles allow.

adapted from the novella by Fyodor Dostoevsky

Tickets range from $21-$53 (including discounts for students, seniors and groups)

Tickets can be purchased through the box office at 416.531.1827 or visitwww.tarragontheatre.com 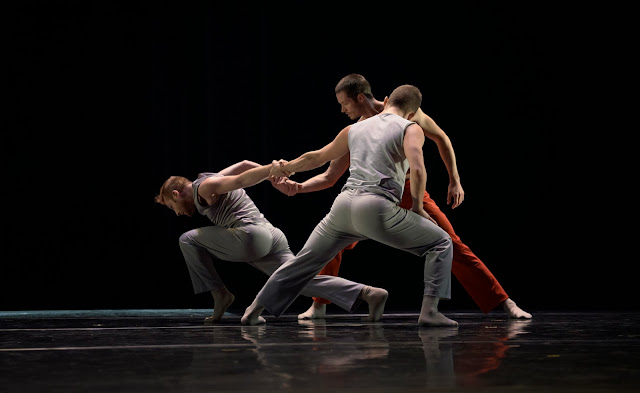 The opening program for the proartedanza fall season is a beautiful action packed variety of music and choreography that exemplifies the company's mandate for passion in performance.

Robert Glumbeck's Shifting Silence opened the evening with sharply focused sequences, divided by a dominant square of light and blocks of dense costume colour. The ensemble, led by Tyler Gledhill's shirtless singularity, moved in solos and duets through contrasting musical interludes. J.S. Bach's classical strains and Senking's powerful electronic music, marked by gorgeous highs and lows, supported the transitions with wonderful nuance and impeccable sound editing. Initially the pairings seemed to have been arranged according to prowess and degrees of corporeal presence. Two red costumes quickly became very distracting as they appeared to denote a connection between the two dancers that never quite materialized. Tyler Gledhill's couplings with Mami Hata were the most connected and dynamic, but Hata's costume suggested otherwise. This would not necessarily pose a problem if the colour and design of the whole ensemble's outfits had not been so reminiscent of a kind of strange Star Trek sci-fi motif. Showcasing the muscularity of Gledhill's bare torso seemed to be a physically defining moment, but a somewhat incongruous choice when the whole company might have been served better by more form fitting, less crisp, interplanetary lines. Same sex pairings between Gledhill and other dancers such as Ryan Lee were able to transcend the designs and showcase the dynamic beauty of Glumbeck's choreography.

Shifting Silence provided a powerful and evocative series of contrasts, all focused around the opening presence of Gledhill's dominant role, creating an exciting and satisfying overall impression of Eda LeShan's  epigraph contained in the program note -


"When we cannot bear to be alone, it means we do not properly value the only companion we will have from birth to death."


Moving into, away from, and in tandem with Gledhill's pivotal red trousered turn, Shifting SIlence was indeed a gorgeous and powerful journey from the beginning of life to an unspecified end, with a single powerful companion to embrace, diverge from, and ultimately consume and be consumed by. 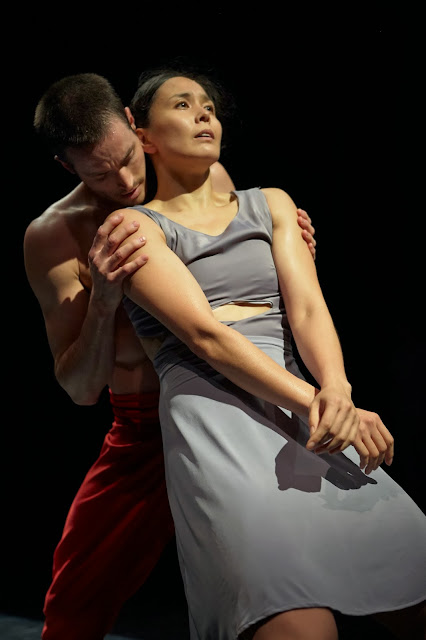 
The second offering, a collaboration between artistic director Roberto Campanella and artistic associate Robert Glumbeck began to suggest a perhaps unconscious movement into the more balanced progression of costume definition and exhilarating physical tones for the overall evening. Entitled simply, Beethoven's 9th-3rd Movement, the high and lows of movement and music worked well in relation to each other as the slow meditation of musical tones gradually built to Beethoven's signature crescendo - ending the piece on an almost anthem like note that led well into the final section of the program. Costume Coordination by dancer Anisa Teipar began to reveal a subtler sense of form and colour that allowed bodies to flow in a less distracting manner than the evening's opening sequence. The bodies are the primary vessel in dance, after all, and there are times when costume can overwhelm movement to a bewildering degree. The Beethoven sequence succeeded beautifully and could have added another level of dynamism had the men's costume's been more sharply defined. The women's torsos were lightly draped in elegant semi sheer greyness with shortened casual lower body apparel and simple black socks. The men wore monotone clad gymwear that allowed them to embody a kind of casual, generalized presence. Chairs played a significant part in the sequence and became beautiful integrated props in a piece that possessed shades of Chekhov's over-furnished dramas where a somewhat familial ensemble scrambles through the domiciled and emotional interiors of complex physical maneuvers. The first appearance of a single chair evoked a sense of "oh no, not the thing with the chair again!" But quickly these simple timeless utilitarian objects provided a fully integrated and mesmerizing part of a truly committed and theatrical element of praartedanza's signature promotional cut-line stating that they do in fact embody great passion in performance.

The final selection of the evening took this sense of passion to the height of perfection through brilliant, powerful choreopgraphy, engrossing music, and sublime costuming by Deanna Sciortino. Venetians Snares, the main performing alias of Canadian musician Aaron Funk, provided a recorded electronic soundscape that possessed a crescendo laden, patterned rhythm that moved the dancers through breakneck pacing, allowing for exciting solos and dynamic pairings. The entire ensemble took virtuosic turns in this engrossing finale, punctuated with simple black trousers and bare torsos for the men, and similar black two piece outfits for the women - covering the chest area with a slim horizontal swath yet defining the body with a strong accentuated power and grace. Entitled Fractals, Guillaume Côté’s choreography matched the envigorating power of the music and ended the program with a fabulous interpretation of the “development of snowflakes, flowers, or clouds” whereby “strict order and unpredictable influence are integral to the formation of fractals.” This idea of “order and chaos, along with shape and pattern” was a beautifully realized tribute to the complexity, serenity, and pandemonium of nature’s varied emotional and material offerings. 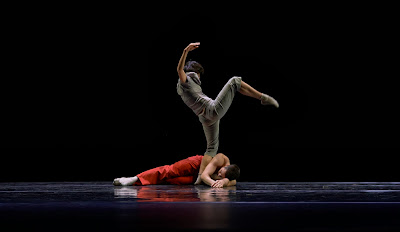 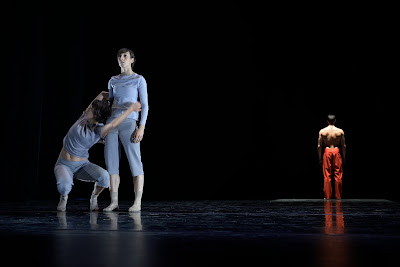 proartedanza - at the Fleck Dance Theatre, Harbourfront, until October 5th