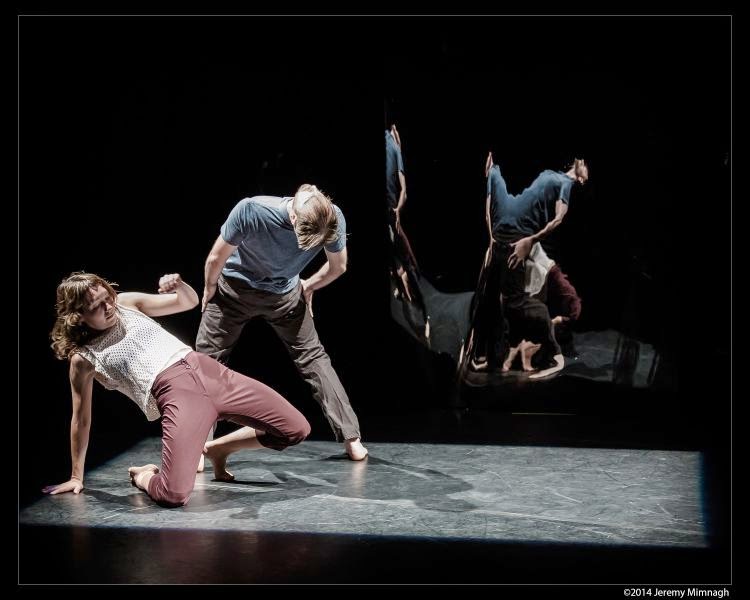 
a choreographic work by Heidi Strauss 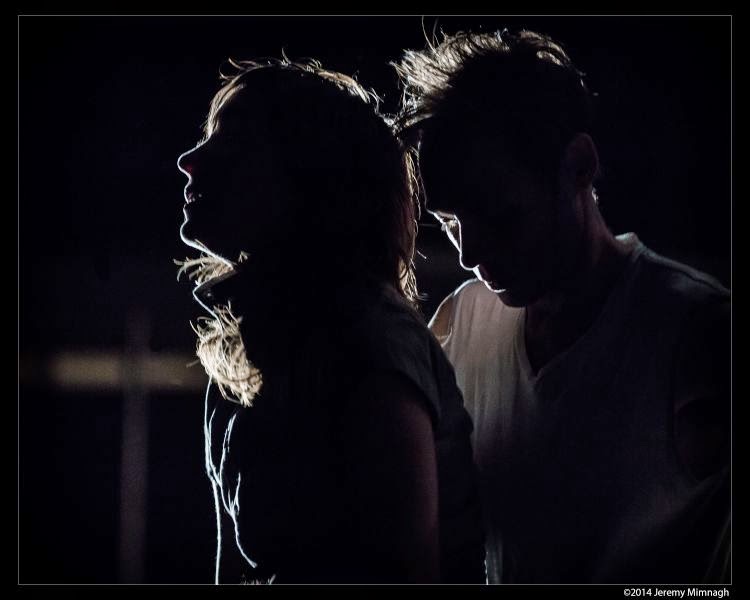 In the world premiere of Heidi Strauss’s elsewhere, the complex realm of Affect Theory is given heightened attention as dancers involve themselves in elaborate displays of individual and group excitability and restraint. Perhaps some of the most intriguing and enlightening textual moments occur when one of the dancers stops, mid movement, and attempts to describe what it is like… 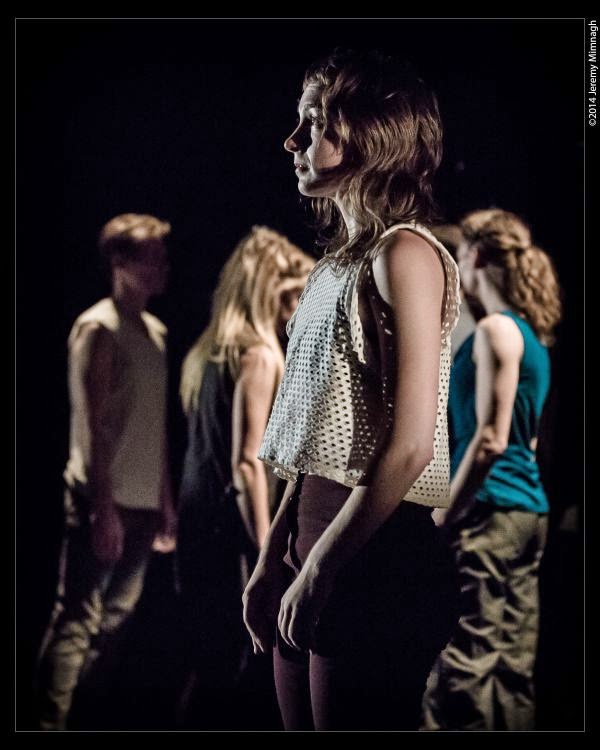 The overwhelming ephemeral question, to which there can be no definitive answer, is pondered in a delicate, somewhat staccato manner by dancer/performer Molly Johnson as she delivers a series of lines with a kind of self-assured uncertainty. Her verbal expression becomes a beautiful, fragile, testimony to the ways in which life and movement intertwine in mysterious, volatile, at times bewildering ways. 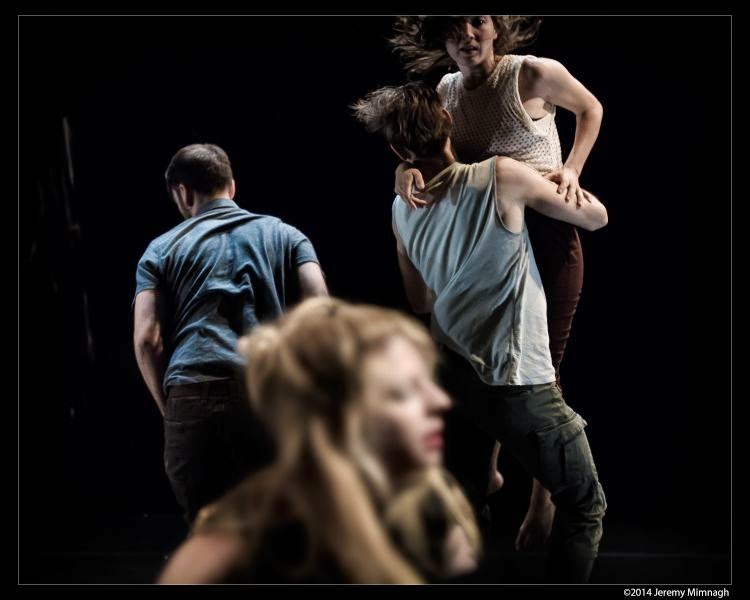 This ménage of varied movement and intermittent verbal expression is at its best in elsewhere when it finds specific dance phrasing that allows the dancers to come together and separate in vivid, at times explosive encounters. The touch of an arm or the bend of an elbow, in the hands of dancers like Danielle Baskerville, Miriah Brennan, Luke Garwood, Molly Johnson, and Brendan Wyatt become tightly conceived, idiosyncratic gestures that are an extreme pleasure to watch. 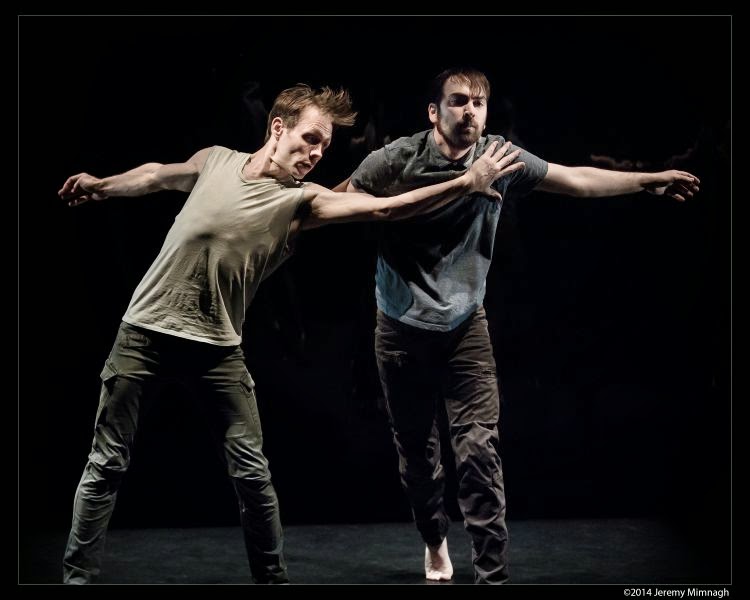 Music by Jeremy Mimnagh, although evocative and punctuating, tends to over syncopate some of the rhythms, creating a frequently predictable sense of mood that overstates otherwise contained and self-evident gestures. This may be an attempt to illustrate the connected patterns of physical memory as they manifest themselves through the 'affect' of past corporeal experience. But it tends to over connect and simplify, when a contrasting, more dissonant soundscape might deliver more ‘affective’ bodily configurations. Nevertheless, the music does possess a powerful luminosity as it mixes with the choreography. Mimnagh’s accompanying light filled, softly flickering projections, displayed on Duncan Johnstone’s large painted screens, create an effective abstract counterpart to the shimmering patterns of movement and emotion.

Focused eyes and tense facial expression play a significant part in the overall balance of physical/emotional lyricism and skeptical interplay as the ensemble appears acutely aware of their sensory connections to each other - connections that extend themselves through style and tone among a series of five deeply committed onstage bodies. 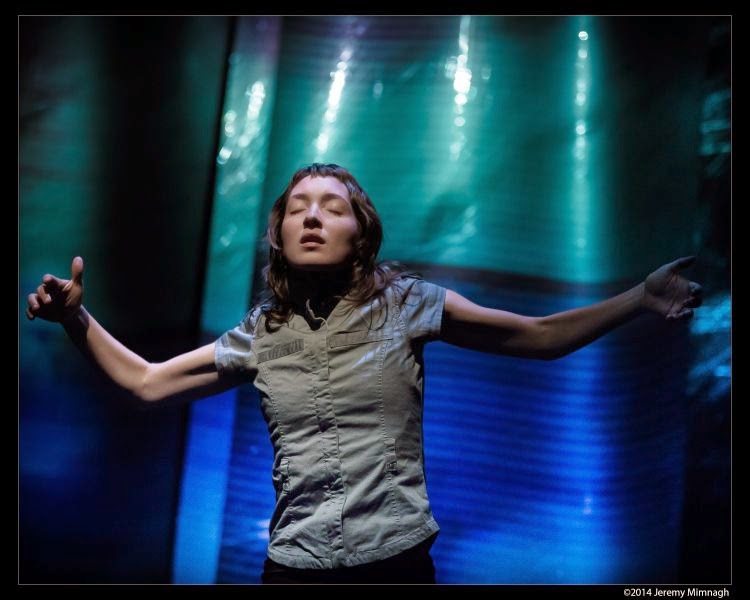 In her programme notes Heidi Strauss explains how affect theory has influenced elsewhere, and her perceptions of life and movement in general.

“I now see affect as a part of everyday life, intrinsic to the reality of any moving body, from the woman walking her dog, to the man doing Tai-Chi every morning, to the kids kicking the ball in the park across the street. And these involuntary responses are built on everything we have experienced until this point - not held in check by the boundaries we might think we are placing around our own personal histories.” 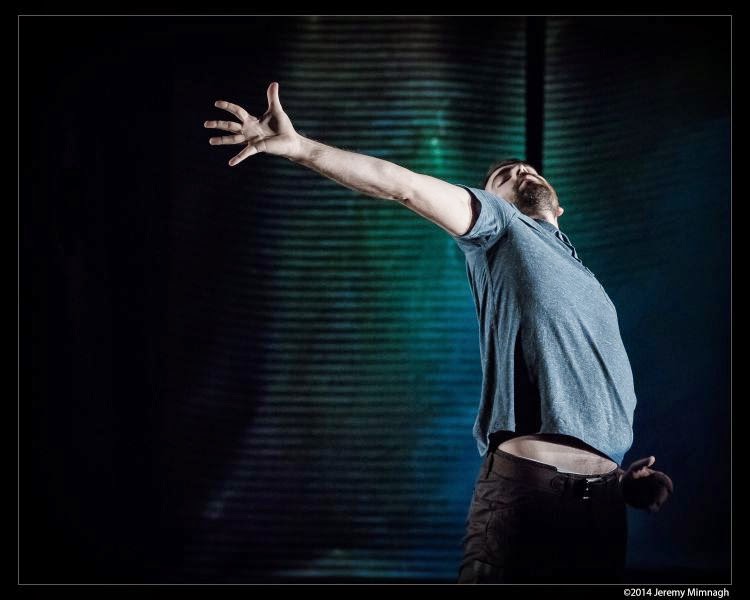 Desire, appetite, pleasure, pain, and sorrow are basic tenets of Affect Theory, and, obviously, the experience of being alive in the world among other bodies. elsewhere, in many ways, is a simple expression of the complex ways in which bodies respond to each other over time. Strauss has dared to examine these connections in a sixty-minute meditation that excites and moves the emotions of the viewer and the dancer in a pleasurable and powerful manner. And yet there are moments when the overall choreographic narrative slips and becomes too akin to everyday experience in a seemingly pointless and random manner. This may very well be an expression of affect theory. But when it is reduced to a group of dancers chasing each other across the stage, it becomes superfluous and distracting. 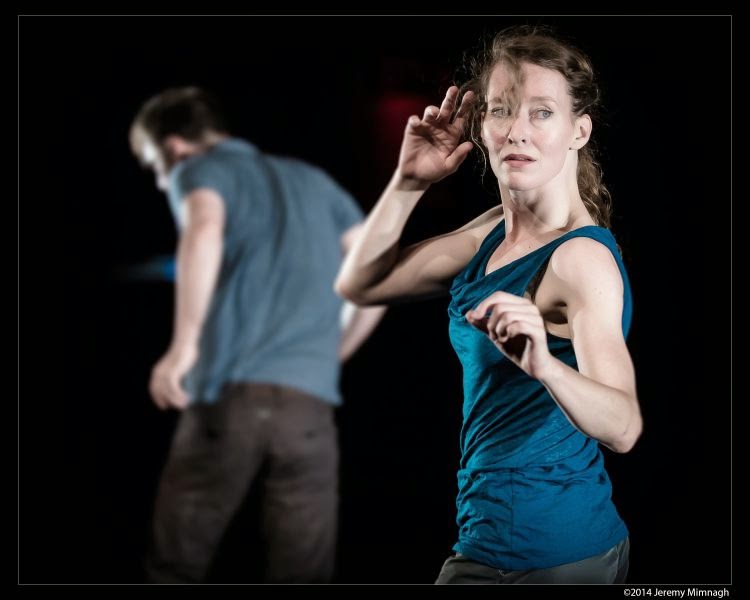 In sharp contrast, when Brendan Wyatt takes part in the meticulous chaos of flailing arms centre stage, affect becomes explosive and breathtaking. One witnesses the hit and miss spectacle of a dancer so in control of the uncontrollable that we sit in awe that he has not knocked his own head off in the overwhelming process. Or when Wyatt and Luke Garwood embark upon a beautiful and aggressive  pas de deux, with lifts and anguish in tow, the spectacle is both powerful and elegant. Or when Molly Johnson, Miriah Brennan, and Danielle Baskerville attend to their male cohort's aggression, creating delicate and connective gestural tissues between fingers limbs and torsos, this is where Strauss’s take on affect theory excels. 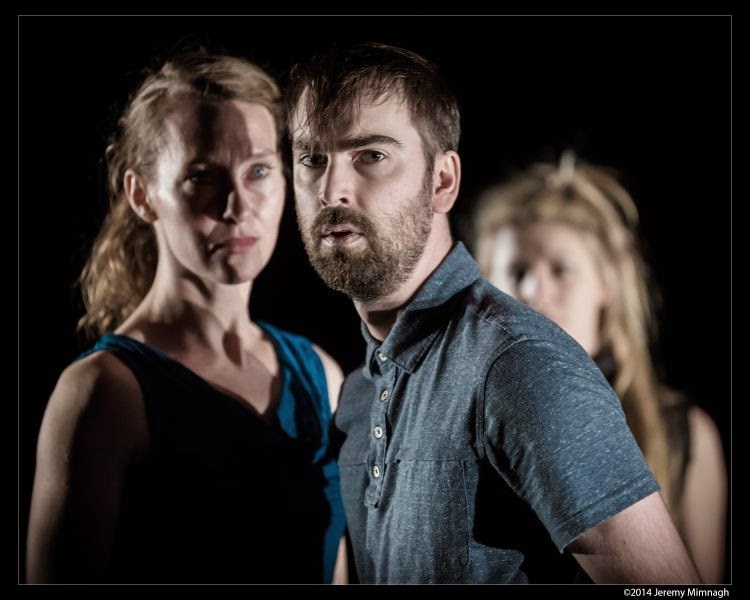 Ultimately, affect is dance and dance is movement, and elsewhere suggests that we are always in another place - past, present, and future - simultaneously - as we move among each other, creating the elusive patterns or our breath taking selves. With a slightly more streamlined (forty five to fifty minutes) take on the overall phrasing of this one hour piece, whereby music and movement are given less rambling moments of punctuation and inessential synchronicity, elsewhere could begin to exist more successfully somewhere between theatre and dance. Textual moments could be expanded and some of the daily, walking rhythms could be excised. The one on one couplings could be more balanced between genders, rather than a gorgeous yet somewhat predictable display of masculine and feminine paradigms. This could enable elsewhere to live everywhere - thereby allowing it to breathe more fully within the affective modes of patterned uncertainty that human existence and the flesh filled glory of bodily contortions are inherently prey to.
elsewhere runs at the Harbourfront Centre Theatre until September 27th, 8PM
Posted by bette at 8:09 AM No comments: 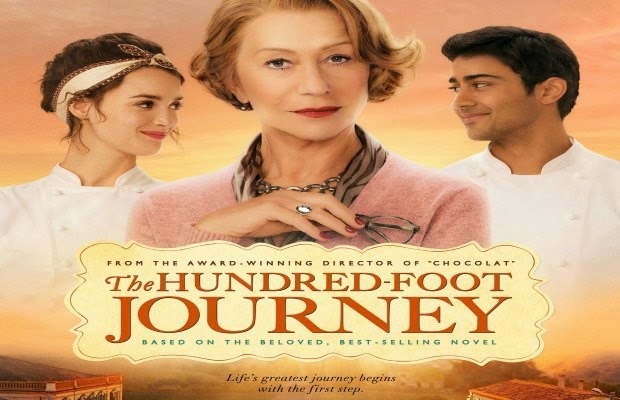 SPOILER ALERT - THE HUNDRED FOOT JOURNEY IS A FUSION OF MANY CULTURAL AND CULINARY STYLES, ALL ENTERTAINING TASTY SENTIMENTAL AND ANNOYING….

It has been a very long time since I intensely disliked a film that I was so thoroughly engaged and entertained by. I cried (laughed a little) all through it, but I was exhausted from an eight hour bus and train journey from Quebec the day before so I would have cried at the drop of a hat. By the end of the film, tear stained and enraptured by the irritation of incessant and predictable romantic play, I almost wished I had saved the thirteen dollars and just dropped my hat and wept.

And the business class boozy train journey included a lovely conversation with a woman who shared her assessment of Canadian regional tastes based on the kind of drink we order on trains. I ordered rum and coke, white wine, and then a shot of Baileys as fond homage to my white trash heritage. She ordered scotch, wine, and port - and had just seen the Faberge exhibit in Montreal. So I was feeling a bit critical of the decorative, culinary and libational arts. 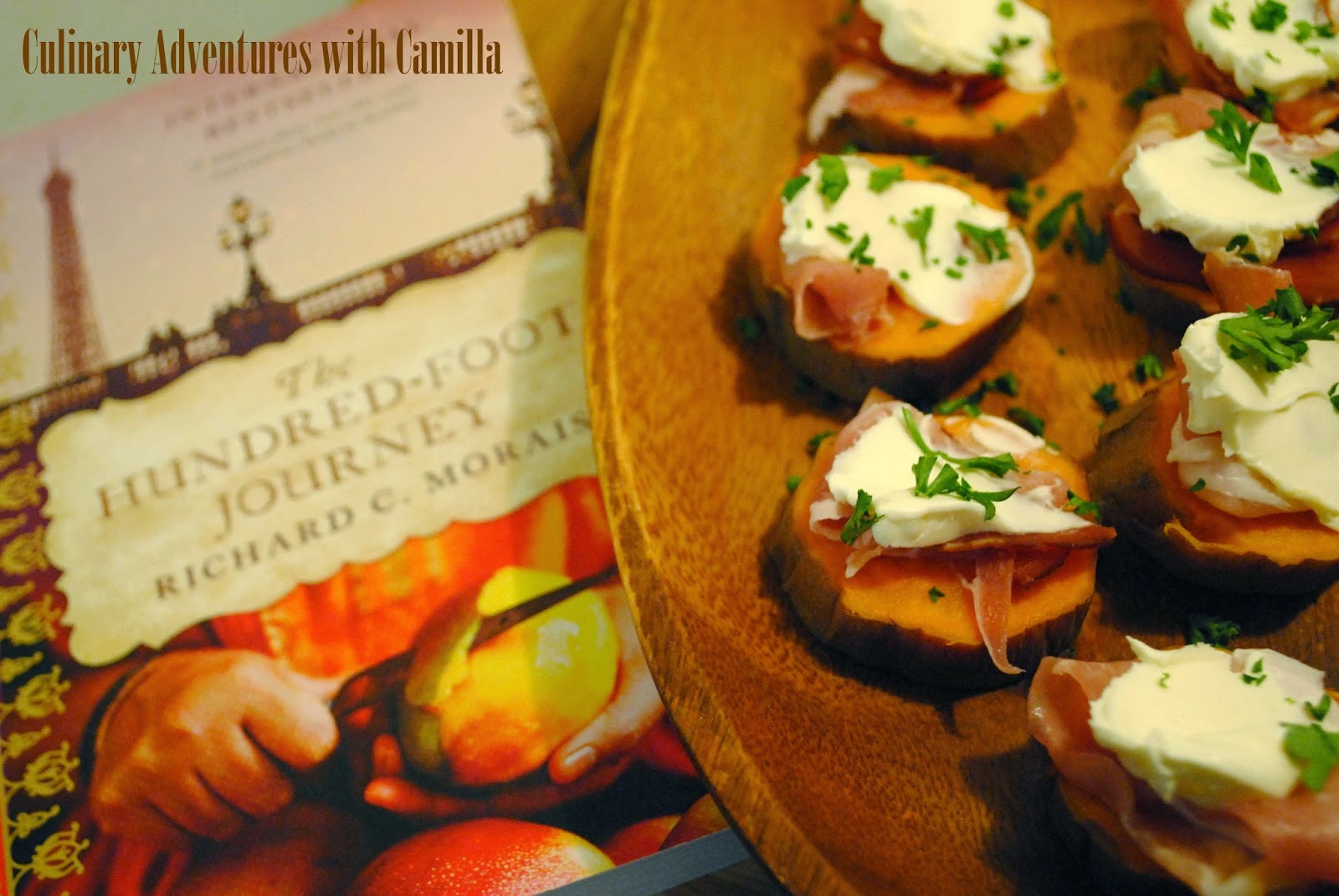 Similar to the post-colonial colonialisms of The Best Exotic Marigold Hotel, The Hundred Foot Journey is a charming, romantic comedy about rampant xenophobia, marked by a particularly ugly and violent hate crime part way through. From a meta-theatrical point of view one might entertain the casual desire to examine the cinematic politics of casting a famous British actress as a French woman in possession of a very uneven accent - a French woman whose race politics make an about face after she has consciously taken part in the same forms of cultural xenophobia as some of the townsfolk. 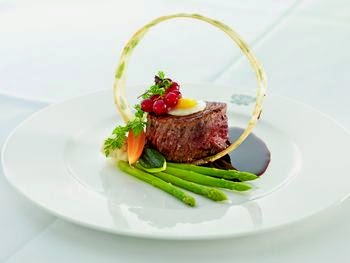 By dismissing a young French man for similar hate crimes the character becomes a sympathetic maternal force by default. By the end of the film it isn’t too difficult to tell what she prizes more, a Michelin star or a Michelin award winning man. She needs and wants both and does everything she can to both lose and regain their attentions. The Hundred Foot Journey becomes a parody of culinary and cultural traditions and makes high-end French cuisine look like decorative appetizers alongside the more lavish Indian dishes. And then of course fusion, the ever-popular contemporary form of mixed cuisine, provides for a metaphoric grand narrative that ultimately makes all of the people happy all of the time. 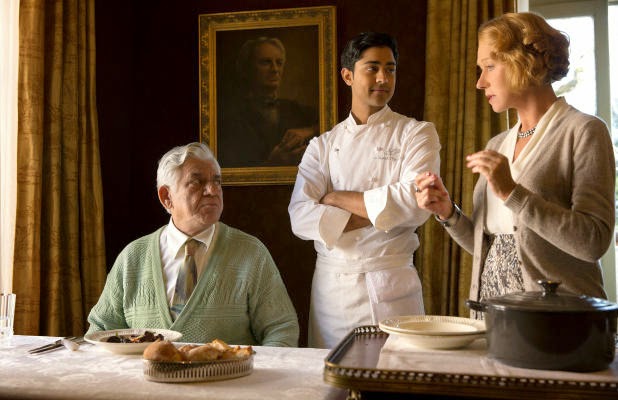 Helen Mirren is always gorgeous and mesmerizing in her roles. It is hard to take your eyes off of her during this two-hour culinary spectacle. But when she speaks her French is crisp and strained, if not somewhat convincing at times - but at other times she is just Helen, and the British sounds become embarrassing as they seep through, providing an unpleasant reminder that Catherine Deneuve would have been far more convincing in the part. Om Puri, as Mirren’s “almost boyfriend” rises above the material at hand and gives a very strong performance as the self-willed paternal force who brings the maternal origins of his family’s journey full circle, and honours tradition as he embraces change. 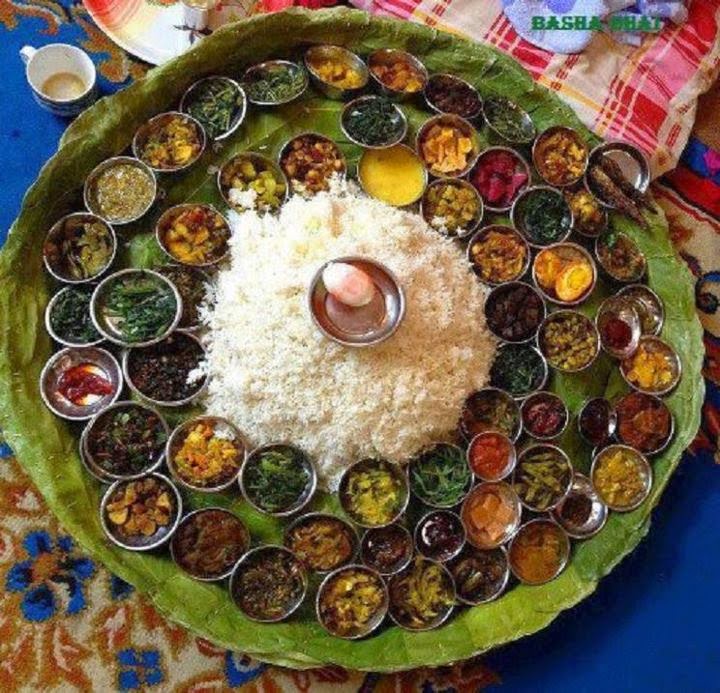 My favorite romantic narrative was the movement from the village to Paris, where the prized young chef gets a new suave hairdo and grows a bit of light sexy facial hair. My reading of this fashion move pushes all culinary interests to the side and tells me that the beautiful young female chef had to send her male competitor to the city in order to pretty himself up before she could have carnal relations with him in the kitchen. But I am being ridiculous about the sublime here and know in my heart of hearts that true love is blind when it comes to physical attractiveness, tra la. The young chef comes back to his kitchen collaborator looking sleek, scruffy, debonair and irresistible all at once - when he had begun the film as a wide-eyed, beautiful boy aspiring to the heights of cooking genius that his mother has instilled in him. Damn!!! If Disney, Oprah, and Spielberg hadn’t made the film we might have been treated to some fabulous fusion sex and the dishes would have been way dishier.

The acting is lovely, the scenery is divine, and the empty country road between the two restaurants is harrowing in its emptiness as couples nonchalantly wander across a hundred foot stretch of cultural mayhem and make one wonder whether a Stephen King version with a ghost driven monster truck filled with croissants and lentils might have made the opening line of the film a little richer and less simplified - “We cook to make ghosts.” Releasing the spirits of food, cultural difference, and romantic intrigue becomes a garden of earthly delights, but unlike the famous painting by Hieronymus Bosch, these delights lack the relentless presence of hell on earth. There is hell, of course, but it is all so Disney’fied. So go see it. Like me, you may laugh, cry and crave South Asian cuisine all through it.

And the limp asparagus scene was priceless.
Posted by bette at 9:38 AM No comments: