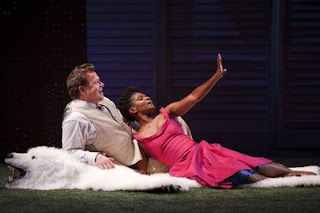 The current canadianstage production of fernando krapp wrote me this letter is a feast for the eyes and ears. Director Matthew Jocelyn has given his actors a dance-like quality as they indulge in incredible, at times slapstick, movement across a stage design that is both intimate and monumentally cold and barren. Evocative and thrilling sets and costumes by Astrid Janson and lighting by Robert Thomson punctuate this harrowing, at times comic drama.

A huge revolve locates the action within a variety of settings that represent the dwelling places of the central straight couple - a couple in the throes of a very surreal and intense form of conjugal ‘bliss.’ With psychoanalytic overtones and darkly comic moments, the ensemble performs this incredible play with great skill and acumen as they take somewhat oblique and enigmatic characters and render them life like and terrifying.

Tranlsated by Joceylyn, from the original German script by Tankred Dorst, the piece has German expressionist overtones with hints of the kind of socially charged works of Yazmina Reza and Edward Albee. This is an explosive collision of Whose Afraid of Virginia Woolf and The God of Carnage - on LSD, and is a must see as the opening show for the canadianstage 2010 season.

Jocelyn’s new vision for the company - “to challenge and reinvent traditional notions of theatre” - is played to the hilt in Krapp and includes utterly poignant stage effects that culminate with a beautiful scene of Shakespearean proportions, replete with a haunting lyric and a giant backdrop that hit home the pivotal message about love, loss, memory, misunderstanding, altruism, and absolute matrimonial confusion.

Carefully placed picketers outside the theatre on opening night displayed the pun ‘ish message on bright yellow placards - live theatre is krapp - with matching buttons available in the lobby. On the contrary - fernando krapp wrote me this letter reveals the intensity of emotion and high level of diverse aesthetic commitment that Jocelyn, as the new Artistic Director at canadianstage, intends to bring to the company.

running until october 16th at the the bluma appel theatre