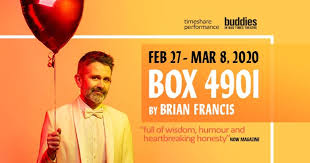 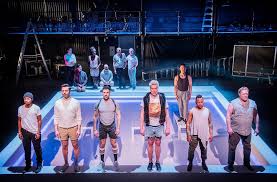 As co-creator and director of Box 4901, Rob Kempson gives a simple and engaging script a vibrant elegance that shines throughout this enthralling 75 minute tour de force. Brandon Kleiman's set is a glaringly effective and creatively arranged space for the men to move within and energetically amble through their tightly choreographed moments within just over a dozen skilfully performed short monologues.

Writer Brian Francis stands at a basic white lectern and comments on the action, integrating his autobiographical presence into a form of creative non-fiction that draws in viewers from start to finish. 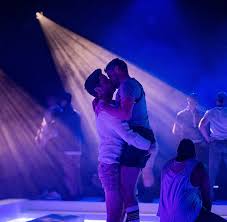 Too numerous to mention, the ensemble is impeccable, with standout performances by Chy Ryan Spain, Keith Cole, and Hume Baugh.Placing Cole near the middle of this 13 actor cast and Baugh at the end, gives diverse rhythm and balance, with Chy Ryan Spain adding an energetic 'intergenerational' narrative touch to the proceedings. Cole presents an irresistible character in his well managed interpretation of the character Snuggles, while Baugh ends the piece with a lovely and layered young man in pursuit of all the fame and good fortune that money and self-perceived looks can buy. 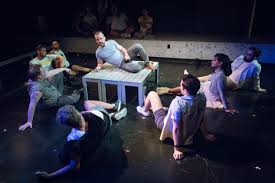 Basically, the playwright's response to long forgotten personal ads brings a wonderful kind on historical continuum to a play that speaks to past and present gay 'lifestyle' in a detailed and eloquent manner. Francis's 'narration' and responses to each of these long lost near attachments takes on a kind of David Sedaris quality - as both charming and cutting reminiscences via superb storytelling surface throughout. Chy Ryan Spain's older character, while sensational through Francis' somewhat scathing response, reveals an amazing generational gap that is both sculpted dearly and critiqued with much less endearment.

But such is life and deeply felt memory in Box 4901, sold-out for the run, with only three more performances. So call the box office, or show up, maybe someone will cancel and you'll have the chance to see this nostalgic and surprisingly current look at the past the present and the future of being queer in a world of ever evolving sex management, mayhem, glory,  and casual hookups based in a fabulous form of call and response theatre at its most engaging.