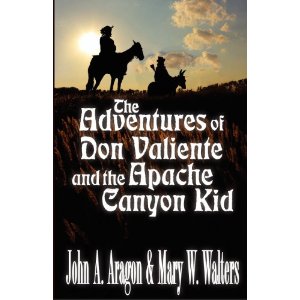 available at amazon.com
and on Kobo http://www.kobobooks.com/ebook/The-Adventures-Don-Valiente-The/book-OXiCI0u9Ekyi6WWOm4UKRw/page1.html


The orphaned eighteen-year-old stablehand Rosalind Grundy is seduced by a married woman, and faces a lynching after the pair is surprised in 'flagrante delicto.' But she manages to escape with the aid of a strange and aristocratic old man who calls himself Don Valiente.


Don Valiente, having read too many dime westerns, has come to believe that he is a famous gunfighter. He thinks Roz is a young man named "Ross," and he takes her under his wing - intending to teach her and to revive "The Code of the Caballeros."

Don Valiente and Roz embark on a series of comic adventures. But when they come upon a grisly murder and the trial of three escaped-convict killers, Roz realizes that her only chance to survive the imminent showdown and to reunite her with her true love lies in her ability to separate Don Valiente's madness from the eternal truths in his teaching.


The evolution of late nineteenth century dimestore novels and mid twentieth century pocket westerns has been a pulpy and predictable narrative journey, with flashy titles ranging from The Knight of the Canyon (1880's) and Arizona Cyclone (1880's) to Outlaw Trail (1938) and The Night Horseman (1920). More recent incarnations include Badlands Bride (2012) and Cowboys and Aliens (2011). Close to my heart and at the bottom of my reading list these juicy Harlequin like tales have become a classic, enduring form. My father's penchant for reading an endless array of dimestore westerns, alongside his beloved copies of The Happy Hooker, Xavier, and Lady Chatterley's Lover, all kept in the tiny accessible drawer of his bedside table, primed me for a classic case of literary snobbery and closeted titillation. A recent revisionist interrogation of this formerly masculinized soap opera-ish form has caught my attention and drawn me back into the netherworld of my earliest literary influences.

With the publication of The Adventures of Don Valiente and the Apache Canyon Kid, John A. Aragon and Mary W. Walters have teamed up to create a wild and wooly post-modern pastiche of some of our favorite cultural icons. By combining hot lesbian sexuality with cleverly concocted versions of Don Quixote, Sancho Panza, and Calamity Jane, these literary collaborators have created a vastly entertaining twenty first century take on a timeworn genre, the dimestore pocket western.

Opening with a titillating scene of carnal exposure the tale moves through the exploits of   Roz and Don Valiente. A case of mistaken gender identity propels the journey through a variety of bloody and imaginative scenarios that include one very decorative hat that stands in for a hybrid combination of high fashion and sacred ceremonial head gear. There are moments of Tom Robbins 'esque flight of fancy as the sheer vivacity and cleverness employed by the authors allows them to navigate symbolic cross-cultural mixed gender horizons that pull at the comic, cosmic, and emotional heartstrings of their readers.

During a recent Toronto reading Mary W. Walters said that the collaboration was a minute, painstaking, back and forth cyber-creation-cum-detailed edit that had the two writers in total sync as they coordinated the lives of iconic villains and brave, mind bending madmen who appear to mistake Hollywood location sets for actual daily occurrences. And yet the characters and the occurrences, from a Mary Pickford-like heroine to rough and ready desert showdowns, are all woven together with such intricate plot devices that, in the final analysis, reality and fiction become integral to the creation of a satisfying and seamless conclusion.

Aragon lives in Santa Fe New Mexico while Walters resides in Toronto. Miles apart they have managed to bring together diverse narrative strains that make their collaboration a single unified piece of entertaining mastery. Max Von Sydow, Angelina Jolie and a diverse cast of colorful characters could surely bring a tale of such cinematic magnitude to life beyond the enchanting pages of this new, absorbing, novel.