Young Prince Hamlet seeks to avenge his father’s death in a world torn apart by political deception. Shakespeare’s best-known tragedy is reimagined on the Tarragon stage through the powerful lens of rock and roll. 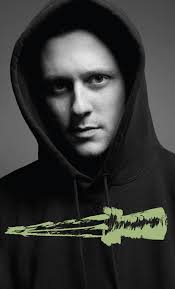 The current rock and roll production of Hamlet, at Tarragon Theatre, is an exciting mixed bag of musical styles, and held together by hard hitting instrumental rock, fine acting and a unique structure. Enabling audiences to listen to each and every speech from the famous disillusioned young prince with a focused, fresh approach, the concert version gives this production of the classic play a contemporary look  and feel - and a timeless power.

Noah Reid's star turn as the young prince is a scrappy, high pitched, intense portrayal that captures a kind of streetwise energy throughout. His clear and measured delivery belies the rough, messy temperament of a young man dealing with family tragedy. This mixture of physical appearance and beautifully delineated performance style makes for an always engaging experience with the many gorgeous soliloquies and quip'ish dialogue designed by Shakespeare to both enlighten and enthral.

Nigel Shawn Williams as Claudius is an exceedingly strong study in power and surprise. He takes command form beginning to end, a believable character with a touch of the pageant host taking charge and then falling brutishly into his own trap.

Tantoo Caridnal's Gertrude, an underwritten and much misunderstood Shakespearean character, like so many of the bard's hapless maidens and matriarchs, lends a skilful subtlety and melancholy grace to the proceedings as she gradually moves from the manipulated 'woman behind the man' syndrome into a frightened and flawed pawn unable to rise above her play-written status - all the time holding her own and ultimately standing by the only character - her son - who is able to see through the eyes of a ghost as he tries try to unravel the murderous familial mayhem that prevails. 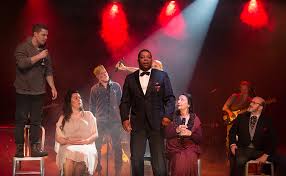 Tiffany Ayalik's Ophelia takes on a similar role as a younger version of the woman scorned by circumstance and male power. Ayalik's musical moments and her overall genuine quality is a wonderful study in innocence, and the struggle to overcome the male dominated company she is forced to keep. Ayalik portrays Ophelia's madness with a great subtlety and wandering confidence as she sinks into the depths of her only possible dramaturgical escape - given a text that never allows her any real power.

Cliff Saunders as Polonius rounds out the central cast with a standout performance. HIs vocal nuance takes n a comic tone as the doting father and court conspirator attempting to unravel the mystery of Hamlet's discontent. In a double role as the gravedigger he lends great musical skill to the infamous playwright's words, breathing new life into timeless verse.

Other standout performances come form the always onstage presence of a backup band. Jack Nicholson (Player King) and Beau Dixon  (Player Queen) come downstage centre for a delightful and powerful moment when the players sing their lines and create the play within the play that becomes the undoing of the current King. Dixon utilizes diverse vocal tones that convincingly portray the players task - to both mock and dramatize the events that surround them through the use of a socially induced Shakespearean staple - male actors playing female roles. 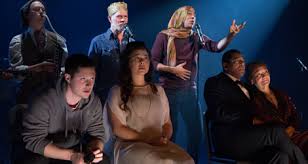 The entire ensemble is outstanding, and brings this concert version to life in a rapidfire/breakneck way that makes three hours (one intermission) of Shakepsearean drama seem like an effortless and entertaining exercise in pure poetry and powerful music.

And the fight scene between Laertes and Hamlet creates an intriguing stylistic contrast to the realism of death and drama that marks the ending of a supremely dysfunctional royal families greatest misdeeds...
Posted by bette at 8:56 AM No comments: