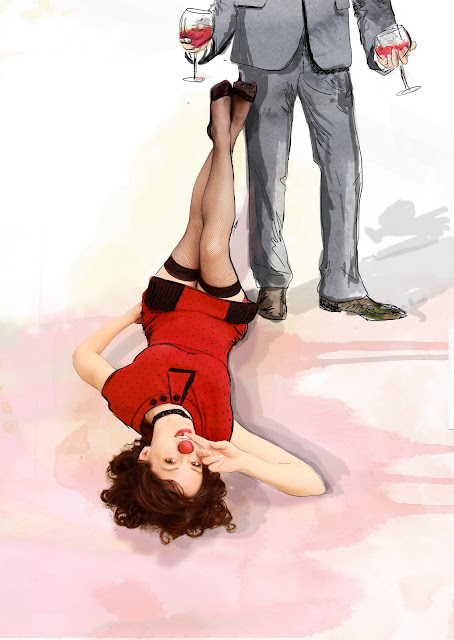 Rebecca Northan’s Blind Date is a rare theatrical phenomenon that takes one of the riskiest, most challenging performance forms and turns it into a ninety-minute tour-de- force with one actor and one audience member. The rest of us get to watch as the romantic roller coaster takes off and never falters for a moment. But of course the semi improvisational nature of the piece has spectators wondering, from start to finish, if the rollicking, fast paced narrative will take a wrong turn without warning. On opening night there was not the slightest glitch. Northan’s blind date, chosen from the audience during an extended soiree in the lobby forty-five minutes before the show started, was a dream date from start to finish. Early on he explained his love for Canada from the perspective of someone who came from India to study engineering only a year ago. His sincerity and youth shone through and won the audience, and the performers, attention at the outset. Northan is able to both lightly admonish and praise her date with quirky, charming delivery and precise physical presence that is both boisterous and graceful as she makes her way into the mind and heart of her chosen beau.


It is the sheer simplicity of this show’s premise, combined with Northan’s immense talent for a kind of nuanced, at times ‘clown’ like enthusiasm and charm, that gives Blind Date the relentless entertainment value that has taken it across Canada, the U.S. and to London’s West End.


Supporting roles from Kristian Reimer and Christy Bruce punctuate Northan’s general comic tone, drawing brilliant characterizations with broad skilful strokes that add layers of story and action to the overall evening. Bruce’s server is charming and possesses an extremely engaging comic delivery. Reimer’s police officer, utilizing minimal props in an agile and hilarious car scene, adds further interactive energy to what is basically a two hander – one actor and one actor/spectator. This is improv/audience interaction at its very best.


Don’t miss the opportunity to watch a completely new and original ride each and every night as Rebecca Northan (with alternate Christy Bruce playing Mimi in the matinees) goes on a new Blind Date with a brand new audience member. Led by Northan’s endless energy and impeccable narrative timing and creation, a simple meeting in a restaurant became a substantial segment from a lifetime of love and mutual respect. Who knows what other dates on other nights over the course of a three-week run will bring! This is a kind of comic suspense that keeps you on the edge of your seat and has you leaving the theatre wishing you could come back several times to see how each date turns out.


UNTIL OCTOBER 4TH
Posted by bette at 3:07 PM No comments:

BUDDIES IN BAD TIMES THEATRE - THE 20TH OF NOVEMBER

THE 20TH OF NOVEMBER

An Interview with Sina Gilani 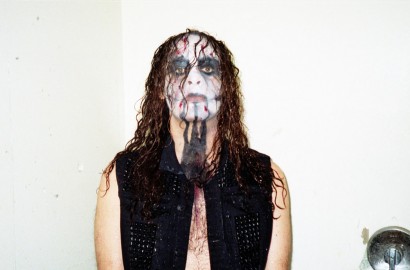 image of Sina Gilani by Tanja-Tiziana.

DB How do you feel about taking on this challenging role?

SG I do have to admit though, that having been cast in this part has rather challenged my trajectory of how I envisioned the course of my career to be. It has been a dream to work with Brendan Healy under any capacity, but I did not imagine that it would happen so soon. I am continuing my education at YorkU (MA Performance studies), potentially touring In Case of Nothing (a play I had written which was part of the SummerWorks Festival 2015), and I am currently writing a new play Field of Reeds. These are my foreseeable plans, but I suppose I have to wait and see what the future brings.
And writing poems.

DB How does a performer get into the intense psychological space that enables them to present such a powerful and at times terrifying monologue like this? What is your process?

SG Well… although for me, acing is craft and a technique, every play and character demands a different approach. This is a very difficult question to answer, and I’m not sure I can answer it in a way that would clarify any methodology or a formula. Truth is, it does take the rehearsal process to try things, to attempt many times to find a connection, a way in, to find/present/portray/be the character. I think I approach my characters without judgement, and with as much of an open heart and mind as I can manage to find…
It is a difficult question to answer, because the process or the character is not in my head in a way that I can talk about him in sentences, I could describe the rehearsal days in detail but that would not clarify what I would hope to communicate; I think the character has written itself and made its impression on my body and soul more than on parts of me that could find an expression in this form of question an answer … the answer to this question would be my performance of the character. It is a taxing play, with difficult subject matters that are being explored, but I am not in it alone; every member of the ensemble that I have had the honor and pleasure of working with has helped to get to the core of the play, the situation, and the character, and to allow for a theatricality, and a truth about the human experience to (hopefully) transpire. To sum up, I would add: with love, courage, trust, and a desire for a clarity or a manifestation of beauty or truth (even if hard to take in, grasp, or face) and the help of other artists involved with the project.

DB What was your first experience of this script and your response?

SG I was terrified, but I understood the character. I understood his pain, I did not (and do not) agree with his resolution, but I wanted to play him. I saw his humanity, and I have been trying to get to that place ever since.

DB How has Brendan Healy approached the rehearsal process and how has it helped you to inhabit the role?

SG Brenden is a generous genius. He, I find, is devoted to honest exploration, and as a result is not afraid to truly investigate truth. It has been a privilege really to have spent this time with him… I am not an experienced actor, but Brendan has mentored me patiently, as much as he has directed me vigorously, while leaving room for me to participate as an artist: to have my perspective heard and become the part of the character and the play. I am grateful. I would have to say, I am not sure if I would have accepted this part if it was not under the direction of Brendan Healy, nor do I believe I could have found the things I have found during the process, to be able to perform it. Working on this project, this character, with Brendan has stretched my mind, my heart, and my soul in ways that I did not anticipate.

DB What are some of your views of this kind of systemic gun violence that is so widespread globally, particularly in the U.S. where this monologue is set?

SG I am against violence in almost all forms of it (bullying, war, terrorism, etc.), but as to my views surrounding citizens access and rights to gun ownership, I will say, that for me the issue at its core is not the legal statues of the matter. The root is violence, the cause is disputes over justice and fairness, guns are merely the tools. There are many interesting debates on the subject, but I believe somehow they overshadow addressing the problem in other ways that it needs to be studied and considered in addition: subjects like education, tolerance, race, modernity, society, etc.


DB What do you think, and hope, that the audience can take away form the experience of this play? There is such a bleak quality to he character’s discourse. Are there ways in which you feel this can enlighten and lead to a positive understanding of the very tragic events alluded to throughout the script?

SG I can only address this question in my capacity of the performer, I’m sure every other member of the artistic team would add to this in their way. The piece is for the audience, it is for them to have a wide range of thoughts and emotions and for them to deal with them in ways that they need to, and take away from it what they will. My hope however, is that the play inspires discussions about the root causes of violence, our approach to education (and the serious mal-funding of it), and democracy: what it means to be a minority, to be the other, and what are the responsibilities of the majority and government to understand and uphold the rights of minorities. Democracy should not be, I don’t think, the “other”ing or the subjection (normalization) of the minority, but instead respecting the right of the “other” to remain queer.

THE 20TH OF NOVEMBER

Michael Moore: “If you were to talk directly to the kids at Columbine, what would you say to them?”

Marilyn Manson: “I wouldn’t say a single word to them. I would listen.”

A young man stands before you. Soon, he will go to his school to kill as many people as he can, including himself. But before he commits this act, he is going to tell you why. One of Europe’s most prolific and provocative playwrights, Lars Noren, dares us listen to the very things we try to ignore.

The 20th of November is a searing indictment of the complacency of contemporary life, and a howl of anger for the outcast and oppressed. With text largely taken from the video diaries and blog of an actual German school shooter, acclaimed Swedish playwright Lars Noren creates a character that is at once sympathetic and horrifying. He insists that we bear witness to the rage and torment of a young man who feels dispossessed and alienated. It is a play that questions whether an act of senseless violence can be the seeds for a new form of revolution. It shows us what happens to the truth when a mad man speaks it.

Lars Noren has been one of Europe’s most prolific and controversial writers since rising to international notoriety with his 1982 play Night is the Mother of Day. Known for his aggressive dialogue and vivid portrayals of tyranny, anger, and pain, the 71-year-old Swedish playwright is widely regarded as being at the vanguard of the theatrical form.

This production marks the professional English language premiere of The 20th of November, in a new translation by Toronto-based writer and actor Gord Rand and featuring a performance from one of Canada’s most exciting new theatrical voices, Sina Gilani.