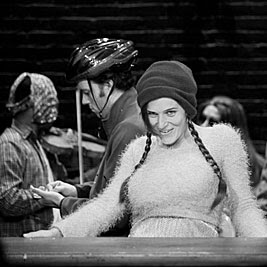 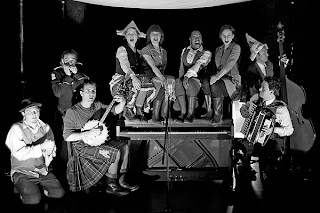 Soulpepper’s current double bill, e.e. cummings in song and Window on Toronto is an ingenious mixture of wondrous whimsy and powerful musical adaptation. The first half of the evening features actors/singers/musicians as they eloquently stumble around a beautifully cluttered stage, utilizing a variety of props and musical forms in order to highlight and feature the poet’s iconic work. Anyone enchanted by cumming’s blend of serious poetic thought and light, layered endearments will be taken in by the sheer skill and commitment this ensemble possesses. Highlights include Ins Choi’s brilliantly sculpted rendition of a cummings masterpiece that begins in a slight, quirky voice and ends with full ensemble support as they poignantly pound out the final lines of a very moving piece of sung poetry.

The second half of the evening, Window On Toronto, although very engaging in its blend of rapid fire, fragmented dialogue and extremely clever staging, could use a little trimming as some of the near slapstick moments appear excessive and somewhat lost through a narrow stage window that excludes parts of the audience. Video projections on either side could enhance a more judicious version of the show. The musical agility of the cummings section might have framed the second half, giving it a more cohesive, less contrasting presence in the overall production/double bill. Nevertheless, all of the strengths of the first half of the evening are apparent in the second half as it contains a series of physically complex vignettes depicting the view of a growing multicultural city through the eyes of a hot dog vendor sitting in his truck and watching the characters and the seasons pass.

All in all, a highly original and entertaining evening of theatre from a company that never fails to rise to the challenge and bring consistently engaging and unique performances to its audiences. 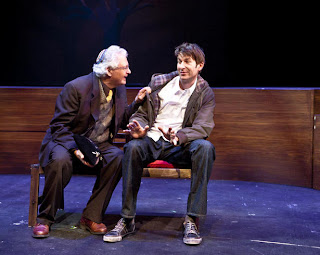 The tears of the world are a constant quantity. For each one who begins to weep somewhere else another stops. The same is true of the laugh. Let us not then speak ill of our generation, it is not any unhappier than its predecessors. Let us not speak well of it either. Let us not speak of it at all. It is true the population has increased. 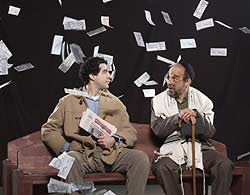 Immediately struck by the somber tones of a modest set framed by bare wooden ramps and a lone tree standing upstage centre, the current production of Zadie’s Shoes at Factory Theatre does not immediately suggest a fast paced piece of theatre that simultaneously provokes tears and laughter. A bleak version of Waiting For Godot might seem more appropriate for such a stark playing space. But once the action begins in this dramedy about love, loss, addiction, illness, and the precarious nature of faith, one quickly sees how Jackie Chau’s simple, open set design, highlighting words and actions, becomes the perfect environment for the rich layers of comedy and pathos that pervade Adam Pettle’s ten year old script.

The current re-mount, co-directed by Pettle and his brother Jordan, has been trimmed and fine tuned, bringing audiences an evening of extraordinarily well crafted ensemble work. A consistently strong cast presents distinct, complex characters equally comfortable with the required amounts of comic and dramatic interplay. Lisa Ryder, Patricia Fagan, and Shannon Perreault create a fine balance of anxiety, neurosis, and devotion for the trio of sisters. William MacDonald’s Bear and Harry Nelken’s Eli are written and performed as wild and witty characters caught within milieus that seem worlds apart. And yet, as the narrative unfolds, these actors delineate brilliantly the layers of their respective binds and come out of them with a great deal of dignity and strength. When Nelken’s Eli exclaims, “If we weren’t pushy we wouldn’t have Israel” contemporary global concerns resonate through a complex blend of personal, idiosyncratic humour and religious and political conviction. Geoffrey Pounsett as Sean and Joe Cobden as Benjamin round out a superb cast as the two young love interests warring with their own personality quirks in an attempt to save faltering relationships.

Basically a play about three struggling couples and an elderly Jewish man, Zadie’s Shoes bears a universal message regarding specific issues around the frequently chaotic nature of keeping one’s sense of material and spiritual faith intact. Pettle began to write the play as part of a structure class while studying at the National Theatre School. His tightly conceived collection of scenes attests to sheer dramaturgical finesse as the story culminates in a series of fragmented, sharply woven vignettes, providing a perfect climax for this always entertaining and thought provoking play.

And at the end of the day, and the play, as characters scatter and Eli gives some final words of open ended insight, Beckett’s famous line springs to mind in all it’s conflicted wisdom.

“Nothing to be done."