FORNÉS x 2
THE IMPRESSIVE & THE UNIMPRESSED

Jordan Tannahill – Theatre of the Unimpressed

I’m not big on interactive theatre. Especially when I’m napping. But I will make an exception for the current production of two Maria Irene Fornés plays being presented in a freezer bag of a space in a basement in Kensington Market. It’s not that it’s cold in there. But the lush silvery walls do look like the upholstered inside of something I put one small salad and four bottles of wine in when I go on a picnic, alone. Maybe some jello vodka and tequila shots for dessert.

Bad theatre does not put me to sleep. Exhaustion does. I dozed off once, in the seventies, possibly the eighties, sitting in the front row, during a lovely little production of Hamlet, starring RH Thomson. I think he was playing Ophelia. Perhaps not? I mentioned it to him during a chance meeting on the subway after his performance in Tom Stoppard's The Real Thing, and he scowled lightly and said “Oh, that was you.” I think Tom would have approved.

I really don’t mind when audience members slumber lightly in a play I’m in. Sometimes they are doing us both a really big favor. It may in fact be a hallmark of what young’ish theatre maverick Jordan Tannahill calls the Theatre of the Unimpressed. From my first reading of his brilliant essay/novella, I have come to the conclusion that a sleeping pill could very well be the antidote for  tedious theatricks. But there is no room for tedium in Theatre Asylum’s wonderful mounting of two short'ish plays by the radically inspired Cuban/American playwright of the 1960’s and onward.
Maria Irene Fornés has a incredible skill for cutting right to the bone in sharp, uncluttered dialogue that speaks its mind directly and with a visceral air that allows theatre interpreters to give the overall mise en scene as intense an atmosphere as they fancy. Clearly, this is what Theatre Asylum fancies and they have successfully tickled mine - fancy that is.

The Successful Life of 3

In the first 27 minute offering comprising the first third of the evening the metallic walled atmosphere floundered only a little due to the placement of the actors as they are  butted somewhat awkwardly between three sections of audience in a long narrow space without enough bells and whistles to distract us from the precarious view. But the arrangement of a couch or two in one area is a pleasing and welcoming touch. Luckily I was not sitting on one or I might have sprawled out and never regained consciousness when Hardee T. Lineham spoke to me briefly, in character. True to my own pleasantly irate character I tried to politely mask my sleepishness and get on with the show (my apologies to Hardee and anyone else who even cared to notice).

The performances in The Successful Life of 3 are immaculate comic/animated portraits drawn from a kind of vaudeville skit’ish format. Two men and a woman appear to be indulging in, battling against, and making merry among forms of misogyny used in sketch comedy from yesteryear, and they succeed brilliantly in the hands of an ensemble who understands the demands of one dimensional characters bringing to life the demands of a three-way abusive human interaction. But the setting needs a little more vaudevillian inspired houp-la, exaggerated big prop presence, what have you, to drive the parodic point home. The Nurse’s uniform and the over-sized breasts were effective but need a little more support.

A prolonged intermission runs the risk of losing some of the audience after a short play that cannot – and need not - prepare one for the intensity and depth of the second offering of the evening. But The Successful Life of 3 does have plenty of engaging moments that may have fared better had they been electrified by an immersive environment as compelling as the final part of the evening. Even just a couple of giant bloodied pinwheels and a sequined guillotine might have enlivened the atmosphere. But for the most part, the over-stuffed medical uniform, the lascivious dialogue, and the breakneck vaudeville pacing bounced along with an abjectifying agility that gave everyone a light comic taste of what was in store in the second half of the evening. 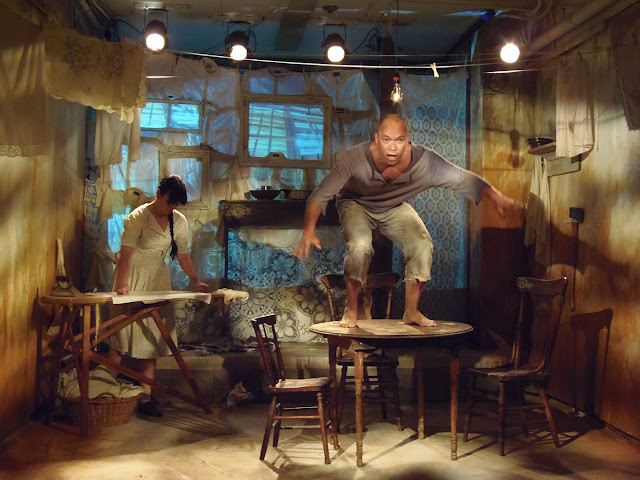 With the same brilliant triumvirate of actors Mud presented a strangely similar narrative of three way romantic mayhem but with a decidedly more gritty realistic style. The beautifully rendered set, with projections by Troy Hourie, depicts a kind of graceful faded kitchen drama about to pale and crumble. Incredible lighting changes throughout by Sandra Marcroft are perfectly attuned to scenes that lighten then darken the action at appropriate moments, ultimately restoring each narrative movement, after the end of a scene, to its former domestic non glory.

Layered direction by Jennifer H. Capraru, with monumentally mind-blowing freezes at the end of each dramatic portion, punctuates the plot with an effective reminder of the violent dysfunction at hand as it relentlessly implodes from start to finish. Michelle Latimer as Mae gives a passionate and impeccable performance in a role that could easily become an over emotive train wreck at the mercy of a less nuanced study in frustration, romantic/material longing, desperation, and a need to escape a claustrophobic male centered equation. With a smouldering intensity Latimer pulls us into what the program notes describe as “a female-centric love triangle…[conveying] themes of masculine rivalry, sex, and the power that come with it.” Hardee T. Lineham as Henry portrays the love-twisted victimizer and victimized with incredible power, diverse vocal characterization and sheer physical bravado. Jamie Robinson’s Lloyd is a beautiful study in simple minded power mongering, dubiously sexy machismo, some deliciously teasing décolletage by costume designer Snezana Pesic, and a seemingly brainless approach to the people that surround him. As a sixty minute tour de force of roller coastering proportions, Mud speaks of primordial lust and a threateningly conjugal bliss that can never be fully attained within the confines of emotional and material poverty where romantic escape and needy scapegoating become the order of the day.

Theatre Asylum’s overall evening of Fornés’ brilliant work is a breath of fresh air in a freezer bag space that promises to impress the unimpressable, and wake us from our exhausted stupor into a world of startling "vital" *  theatre that reminds us that the best productions are the ones that take harrowing tired old stories and turn them into harrowing fresh new takes on the interminably inhuman condition. Unlike the unimpressive mind numbing theatre many lament in this day and age, Theatre Asylum, in its current production of Fornés X 2, achieves a startling, engaging and powerful rendition of two works by a truly great international playwright whose long career and artistic output is done great justice by this impressive offering.

And once again, so sorry I napped for a second or two in act one. They do not put the ‘tired’ into tired old queen for no good reason at all… Thank you and good night…