THE LAST WEEKEND OF THE SUMMER - BOOK REVIEW 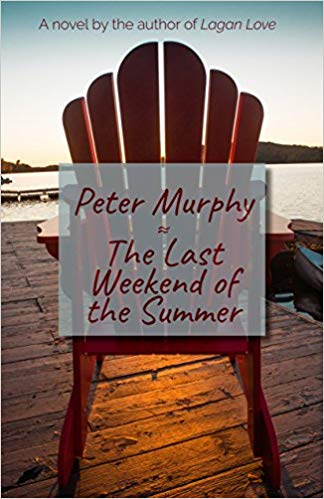 “What are men to rocks and mountains."   Pride and Prejudice, Jane Austen

Cottage country, in Ontarian terms, has become a cross between a Stephen King novel and a daytime soap opera. Soap opera characters often retreat to the lake laden countryside in order to escape from problems that ultimately come to a head in a frequently familial fashion, dredging up old quarrels and unearthing traumatic secrets. Peter Murphy’s engrossing take on a family in the throes of nostalgic grudge-bearing memories lies somewhere between the psychological thriller aspects of King’s world and the romantic soapy proportions of say, The Young and the Restless - moving into Austen’esque ramifications on a broad literary scale.

Murphy’s characters certainly range from quite young to mid-middle and well within quite old verging on finale. But they all reside steadfastly, with attractive physical and emotional variations, within the eternally restless domain that close relations often inhabit on a daily basis. The heterocentricity of this realm is broken nicely in a provocative intersectional manner as one family member and their new partner confront eternal family issues as well as their own neophyte phobias regarding relationships evolving within degrees of welcoming and unwelcoming milieus. No one ever quite reaches the proportions of a Margaret Atwood’ian ‘Wilderness Tips’ form of surreal realism, but they wander close - often veering toward a somewhat arresting collision with taboo and dubious titillation.

An absent patriarch, with devastating war stories in tow, looms over the proceedings and careens, through memory and reminiscence, in and out of the narrative through conversational and descriptive prose sections. This provides a strong psychological base for the variety of problems each family member encounters. The somewhat unwelcome return of a present/absentee patriarch creates the central suspense element of the overall story as all else surrounds and circles him. Murphy deftly handles this cottage carousel of multi-narrative within a single tale.

At the centre of the cast sits Gloria - in all her complicated matriarchal glory. Gathering her family together quickly becomes a puzzle to be gradually solved as the page turning saga unfolds. Why are we here? Who is joining us? Why did ‘he’ get invited? It begins as a bit of a battle of the sexes until one discovers that the battle may have already been fought and the spoils - both emotional and physical, with hints of economic outburst - have yet to be negotiated and distributed.

Perhaps one of the most fascinating aspects of this 218 page journey, through a land of lakes and latent comeuppance, is the way in which Murphy juggles the minds of men and women and finds a curious and satisfying balance between the ‘sins’ of the male creature and the ways in which the females involved behave in response to their ‘manly’ cohorts - simultaneously taking responsibility for, and thwarting, complicity. One section, in a simple yet revealing manner, shows the differences, the similarities, the contradictions and the intersections that bring people together and drive them apart in surprisingly semi-equitable yet saddening, bittersweet ways -

He had come back, all right, and he had apologized, but he was the one who got to be gracious about it. He had asked for forgiveness for his part in all that had gone wrong and never once alluded to her transgressions. She had wanted to talk about them - she wanted to hear him say that he forgave her for all of that, but that was never going to happen now. And she knew why: in all the time they had been together, she had never once allowed him to reproach her. When he had tried, she had rushed headlong into a frenzy of self-condemnation, twisting everything he said into sharp barbs that she would flagellate herself with.

No one gets off easily in ‘The Last Weekend of the Summer.' But they all get to partake in this humid Ontarian ritual that includes barbecues, boat rides, maternal wisdom, and a myriad of escapades that the author organizes in an extremely engaging and moving way.

Murphy’s style takes anyone who has experienced the drama, the comedy, the romance, and the heartbreak of a weekend in the country, back to the roots of a cottage mentality and an emotional landscape that possess a kind of Jane Austen grandeur in a contemporary setting. His writing forgoes the lengthy metaphoric nodes of masculinity concealed in Austen’s famous passage,1 but makes up for it with direct conversational confrontation and understandable volatility in his characterizations.

When Elizabeth, in Pride and Prejudice, travels to the lake district of her own homeland and exclaims, “What are men to rocks and mountains” she exposes the simultaneous repulsion and attraction to all that is monumental in nature and emotion - lamenting her own struggle with the entwined socio-economic relationships of the late 1700’s - revolution and land distribution in the background of a larger European picture. The early machinations of the first two decades of the 21st century make for a subtle background as The Last Weekend of the Summer takes timeless themes and creates a detailed set of family relationships - crafting them into the complex interactive stories that both separate and keep close relations together.

Murphys’ other novels, including Lagan Love and Wandering In Exile, embrace a fascination for discontent within familial and romantic realms, revealing a broad scope of imagination ranging from Irish mythology and politics, to Canadian immigrant experience as it encounters old world religion and socio-political strain within international and provincial regions. The Last Weekend of the Summer embraces a simpler structure as it brings a cast of characters together within a single commodified pastoral setting, yet moves their associations outward toward a vast urban context.

Ultimately a fine end of summer read - moving into fall - at times leisurely, at times thought provoking journey that might be lavishly pored over on a dock, in a Muskoka chair (Adirondack

for other regionally named sitting devices of similar structural import - http://www.ournorthernhomestead.com/muskoka-vs-adirondack/) - or in a tethered canoe with cans of beer, or thermoses of whiskey sours, bouncing in a cooler as one contemplates one’s own place within the cottage laden universe.

1 Pride and Prejudice, Jane Austen - chapter IV volume 2 - Chapter 27 -
“...what delight! what felicity! You give me fresh life and vigour. Adieu to disappointment and spleen. What are men to rocks and mountains? Oh! what hours of transport we shall spend! And when we do return, it shall not be like other travellers, without being able to give one accurate idea of any thing. We will know where we have gone -- we will recollect what we have seen. Lakes, mountains, and rivers shall not be jumbled together in our imaginations; nor, when we attempt to describe any particular scene, will we begin quarrelling about its relative situation. Let our first effusions be less insupportable than those of the generality of travellers...’'
Posted by bette at 1:05 AM No comments: