COLD IRON IS A 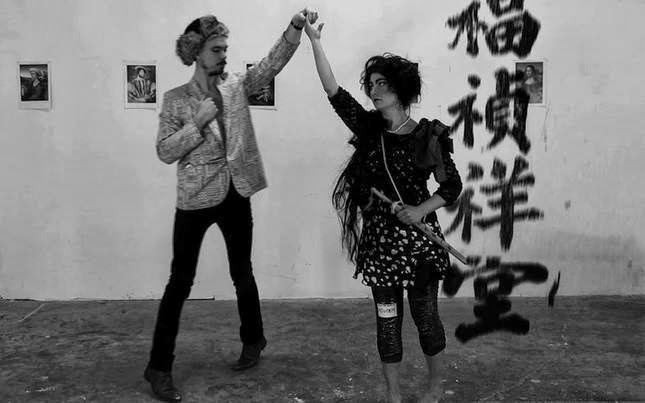 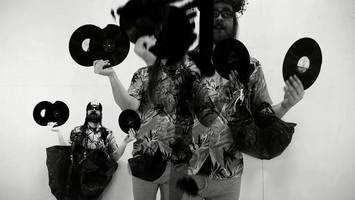 Ian Malone as Don Juan Ponce De Leon
One of the most remarkable things about COLD IRON IS A TITANIC COMEDY are the crisp, dense black and white tones used throughout. Each frame becomes a moving snapshot/performance still that stands on its own as a beautiful example of the creators eye for precIsion within a narrative that defies precise definition.

Director Wes Rickert has assembled an ensemble of superb performers who are able to master that timeless balancing  act between silent poses that add to a layered ensemble, as well as distinct solo performances that create both character and depth. Rickert plays freely and joyfully with loose historical narratives and classic performance art techniques that allow the spectator to follow a fantastical journey through iconic themes ranging from the discovery of America to the snaky tale of the famed Medusa. The erotic mingles with the commonplace and it all comes through with a superb, sharp edged parodic tone that is both playful and serious.

Moments of watery pastoral imagery mingle with zany prop laden tableaus that seem to, perhaps unconsciously, tell the non linear story of how story can become cumbersome and unable to float when it adheres too closely to traditional narrative techniques. The central plotline/metaphor found in the title clues us in at the outset as we embark on a journey that is doomed to a rich, engaging form of glory and defeat. The original Titanic becomes the reiterative tale of a ship that sinks over and over again as story upon story surfaces, sinks, and re-surfaces - from the sentimentailzed Di Caprio/Winslett version to countless other artist's interpretations of that infamous chunk of cold iron that we just cannot seem to get enough of.

The choice of stark, black and white settings - finely set with a contained baroque-like atmosphere of evocative props and costumes - produces a kind of nostalgia for the present that moves us back and forth, in and out, of and through a present past and future that composes a tremendous sense of the here and the now. Set among the contemporary 'ruins' of  Kensginton Market, Little Italy, City Hall, and urban bicycle lanes, the complete mise en scene both floats gloriously and sinks beautifully into a breakneck array of sound and image. There is never a dull moment as this fun, sexy, surreal, thought provoking seventy minute tour de force floats seamlessly through a titillating and mind blowing consciousness of sight and sound.

BELOW ARE PREVIEW NOTES WRITTEN FOR THE PREMIERE SCREENING;
Cold Iron Is A Titanic Comedy was shot, scored and produced in Toronto during 2013, with locations that include City Hall, Kensington Market, Little Italy and the city's bicycle lanes.  While not the basis of the film, they provide place and time references in a filmless film that is a timeless kabuki opera formed by poetry.

Starting with a bird's eye view, multiple players come to the stage as fictional characters carving out their individual journeys.  Passages follow from landscapes painted with cinematic tracking to rolling waves in great lakes.  The players balance on one leg of fiction and another leg of art history.  Words fall from their mouths like water, beans and flowers.  In a room of grand pictures a kettle is an unplugged key, relating to the waves, to the sinking of a ship which claims to be a comedy in a language that is difficult to understand.  Constant is the unravelling and the dance in the room of reproductions where words are also pictures and this medium is our present consumption.

What does the Chinese script mean?

With all of the references to art history - the British museum, the nude, the portrait, the painter, the musician, ballet  - the empty shopping cart brings to mind the sculpture by American artist Duane Hanson of the life size hyper real woman entitled "The Supermarket Lady" (1969), a cart that overflows with objects of mass consumption.  But director Wesley Rickert offers an empty cart, drawing attention to an emptiness found in many of the vessels of this film; not an emptiness that leads to tragic despair but instead to a space that is big enough to begin again.
One of the anchors in this film is the character Don Juan Ponce De Leon (whose claim to fame was accidentally discovering Florida) played by Ian Malone.  Malone plays De Leon as the transient hippie, hipster, hitchhiker, man on the road, a beatnik poet headed for the beach.  He holds the records, the voices, as dead and dying vinyl in his hands.  And yet his presence is as important as the tea kettle, making connections to the vibrations of other objects and words in time and space.  Sound trippy?  The tea kettle interacts with the ballerina and Louis IV, connecting players who otherwise do not relate.  Is the connection significant?  Political?  Is the kettle connected to tea?  To the British museum?  To Medusa with whom Louis IV dances?  Who cuts off his head?  Are the American beaches connected to Chinese script?  Are there elements of chance poetry?  Are accidents the unravelling of history?  Is the electric kettle a symbol of revolution?

Two other anchors in this film are Louis IV, a pretended connoisseur of culture played by Art Szombathy, and Tally Aurora, a shape shifter who is also Medusa, a bird, and musician played by Christina Kozak.  Louis IV and Medusa interact with each other through their dance in the British Museum.  Louis IV looses his head to the cool and collected Medusa, who slices, cuts and edits the dead weight from his back.  Maybe it is a gesture of kindness or necessity, to remove what is no longer needed for art.

The film overflows with gestures and references to cutting ties with art history and art processes.  Theother characters make appearances as brief as hallucinations or fragments of a dream that appear and never return.  When faces do reappear, they are transformed and not always recognizable.  Moving inside, outside, from beach and lake to streets and bicycles, back to the operatic stage again.  Snapshots of people too distant to recognize, familiarity blurring with strangeness, a dream like consciousness merging with photographic memory.  The feeling of deja-vu.

When the Neoist Pied Piper, played by the real life leader of Neoism Istvan Kantor, arrives with his megaphone, the director brings us back to the stage, to remind us that this is clear cutting fiction, which is Rickert's platform for art making.  Through the megaphone Kantor's voice rings with the director's words:  "The hole is a schedule for difficult births".  Another key to what lies ahead.  Wide open spaces.  An audience of one.  Coincidental neoist dump trucks.  People, cars and bicycles.  A recycling of culture.  A wiping out of formula.
We are entering the what happens next era and the future looms big on the horizon as east meets west again.  There is an empty cart, great lakes and an ocean.  The audience must learn to sink or swim or emerge from the fresh waters of digital film making.  Philosophy and humour are the paddle, boat and compass of this fiction.

This kabuki opera film narrative is a surprisingly emotional off-beat comedy.  It embraces, squeezes and spits out multiple perspectives, offering no easy conclusions. 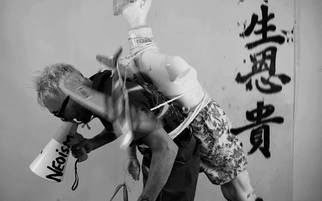 Istvan Kantor as the Neoist Pied Piper
Posted by bette at 8:42 AM No comments:

CELEBRATING
OUR MEN IN DANCE 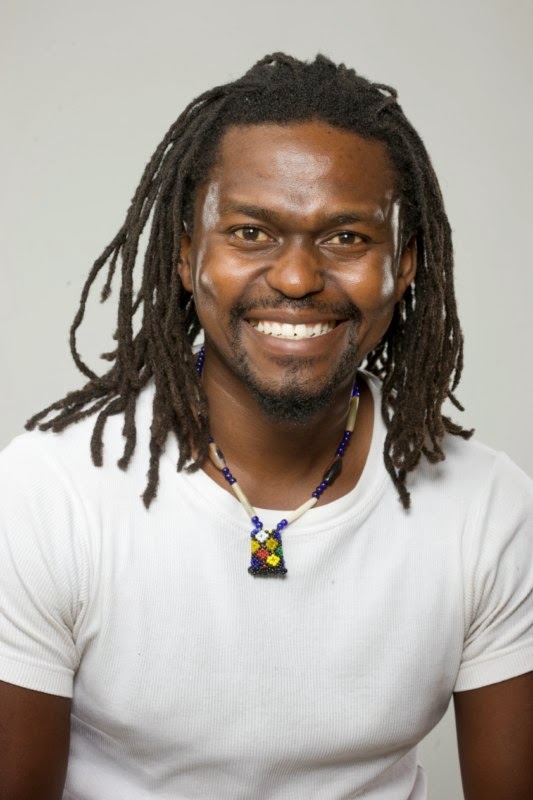 Dance Immersion’s twenty year anniversary event showcased a diverse selection of choreography as an ensemble of men - and one woman - took the stage in an impressive array of  explosive, at times contemplative presentations. Ranging from moving liberationist narratives to syncopated ensembles, all of the artists managed to simultaneously unite and separate themselves from each other as they revealed distinct and expressive physical presence. 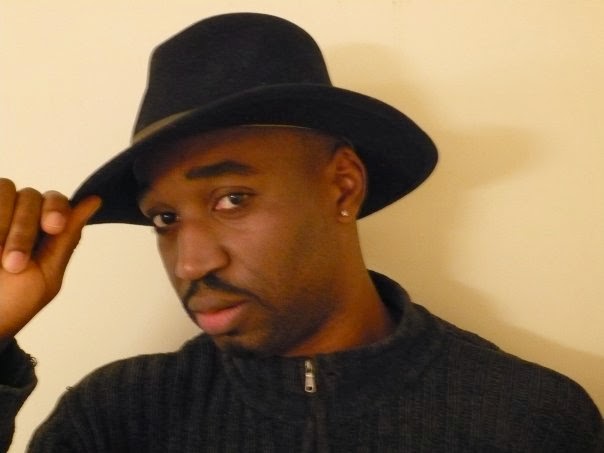 In Breaking Out, the second piece in the program, the appearance of a single dancer - after the opening ensemble entered in flowing white skirt like costumes and bare torsos - reflected the other men’s free flowing dance play with a vivacity and rapid muscularity of shoulder movement that dazzled and punctuated the already beautifully stated lines of Patrick Parson’s choreography. Although described as “masculine, strong and virile” the four men were able to represent “the essence of the graceful male dancer” alongside more traditional gender modes, giving the overall piece, and the evening in general, an amazing variety of emotional, sensual, and physical fervor-cum-sensitivity. 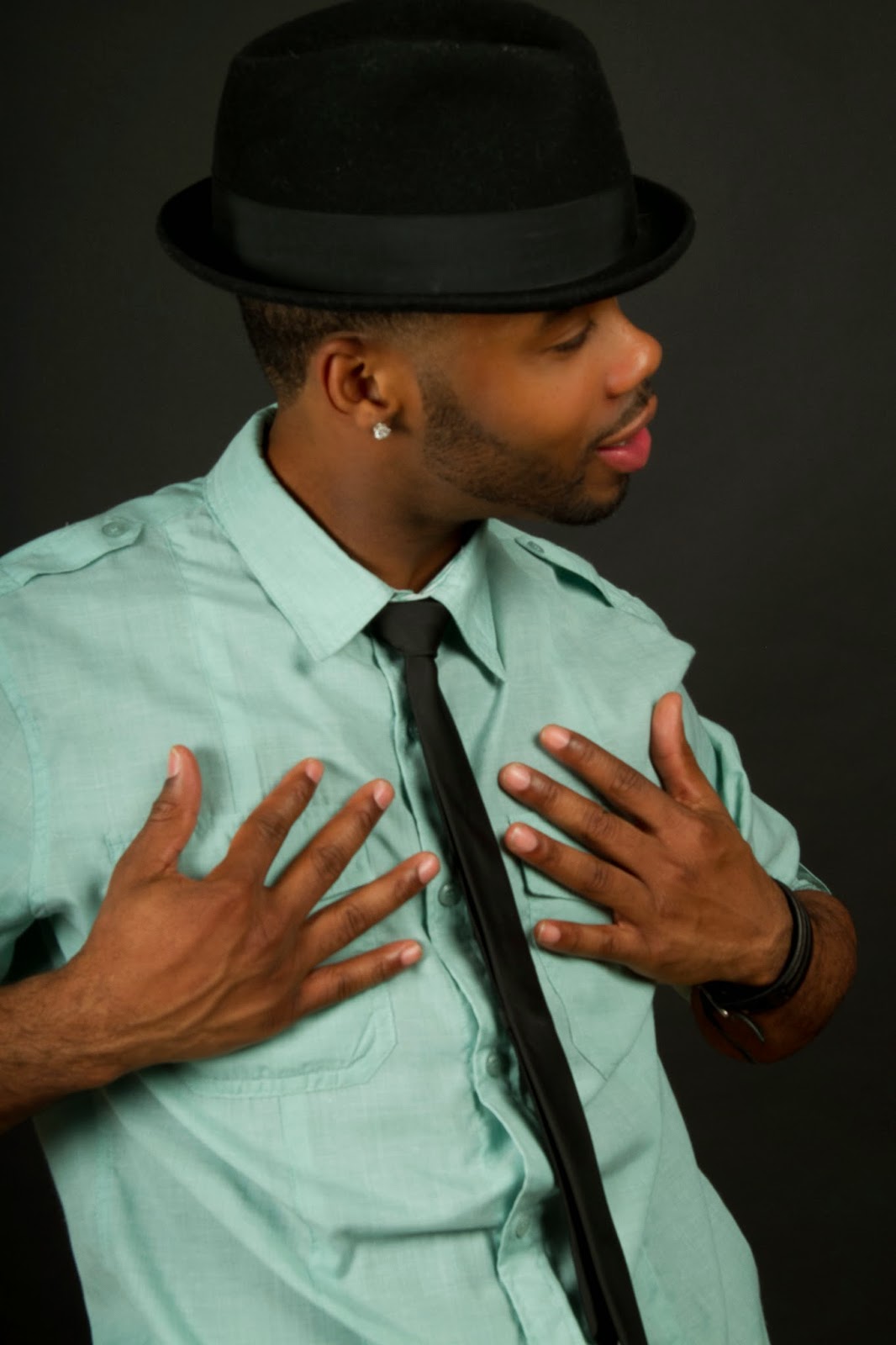 Shavar Blackwood
One piece later in the program, entitled Katuma, possessed a strong performance element that began with a subtle and evocative entrance as Casimiro Nhussi deftly played “the old man, the savvy, whose music and dance is part of his life.” Nhussi seamlessly melded the ponderous steps of a slow moving man with a cane into the fierce, fulsome, and sharply defined lines of his own choreography, culminating in a finale that bore the essence of freedom through the commingling of mind, spirit, and body.

Amanda Benn, in Land of My Soul, simply and powerfully delineated Mafa Makhubalo’s gestural choreographic poses as testament to political upheaval and the struggle to attain unity and freedom, while Shavar Blackwood’s This Woman’s Work gave three men the opportunity to move beautifully, together and apart, through the gorgeous strains of the Kate Bush song of the same name. In unbuttoned black shirts, and plain black trousers, Irvin Washington, Matthew Cuff, and Shavar Blackwood created a virile and ethereal homage to the male body, the music, and the movement as they gave distinctly defined impressions of masculinity and self-assured grace.

Evolution, the opening dance segment, utilized powerful drumming and traditional African dance rhythms that “follows through modern technologies and continues with the rite of passage…after one’s life circle, [ending] with the rhythms from traditional instruments praising ancestors.” The ensemble of four musicians and one dancer created a striking, high energy introduction, replete with skilful agility and physical power alongside the equally resounding and evocative musical accompaniment. 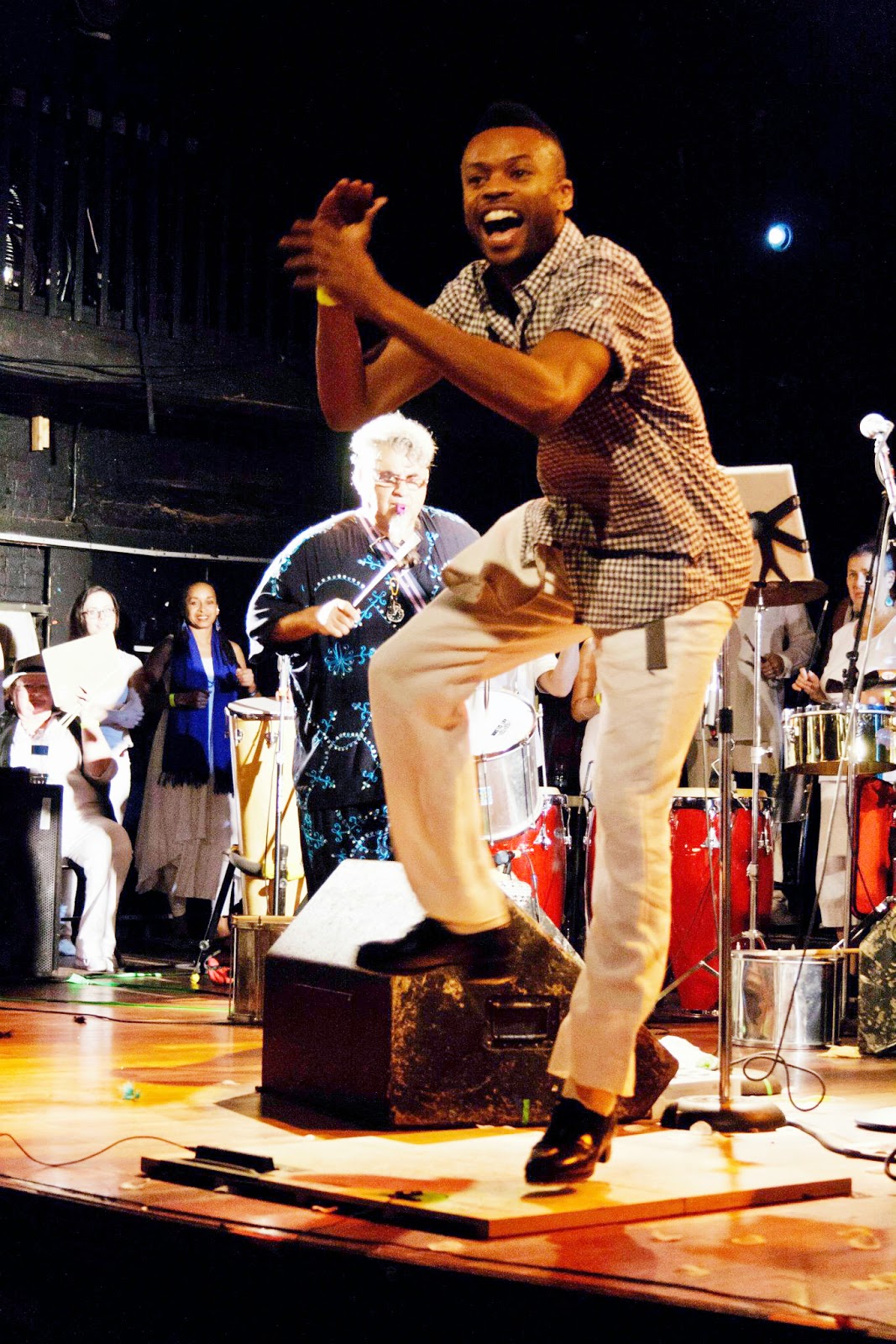 Shawn Byfield danced through his own joyful creation Funk For Your Feet with impeccable timing and a strong connection to the audience as he engaged spectators with a fully committed expressiveness, beautifully supported by Sharon DiGenova’s very focused lower body lighting that allowed the beating rhythms of Byfield's dance shoes to play a starring role in this high charged rapid fire presentation. 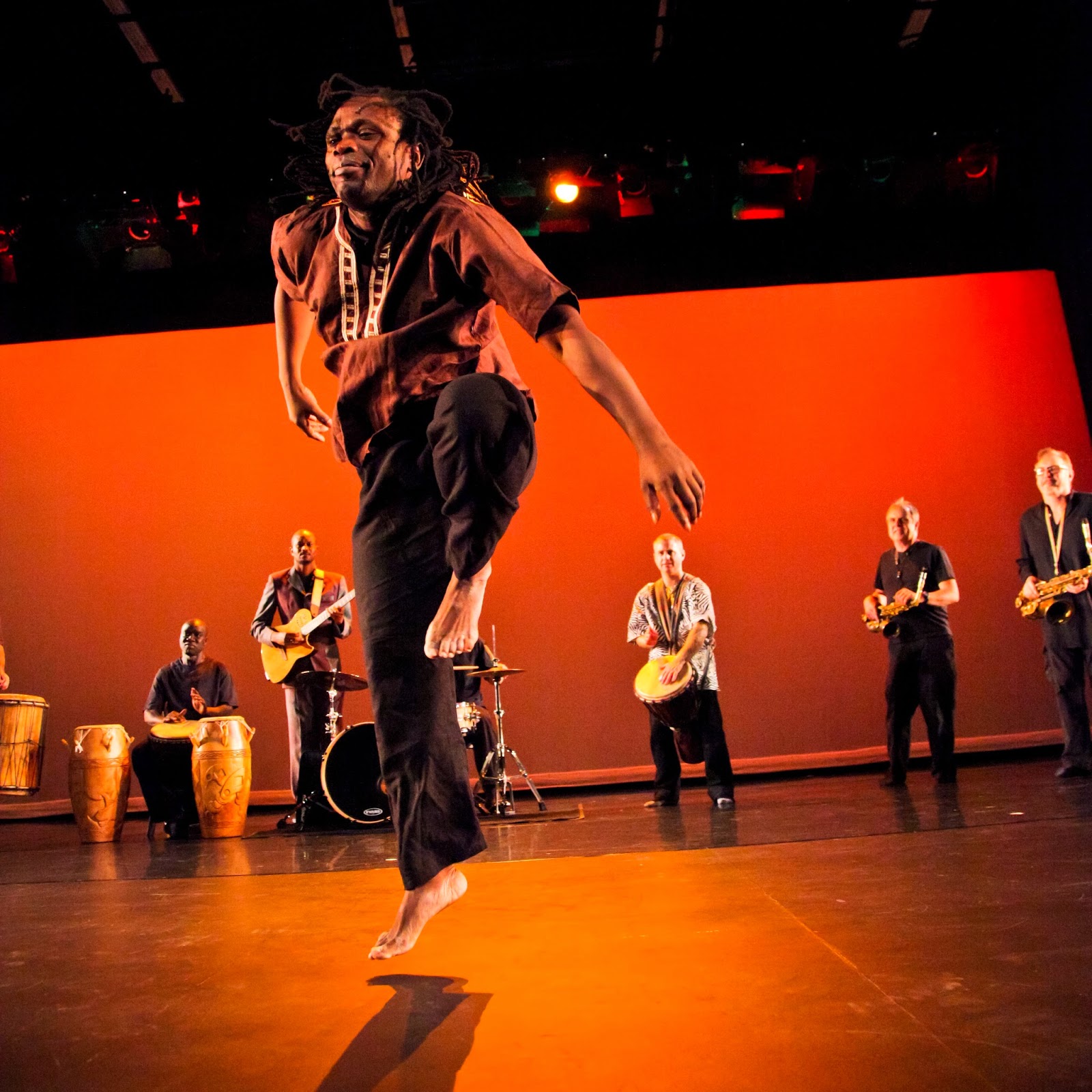 BaKari I. Lindsay’s Blood Memory, danced by Lindsay himself, offered a pensive, beautifully conceived meditation that suggested the many planes of gender and heritage that one man chooses to explore. Supported by a gorgeous red costume - both skirt and pants existing alongside each other - the vibrant red fabric, with sheer form fitting upper lines and opaque lower body contours - gave the varied movement a simultaneous combination of free flowing grace and muscular prowess befitting the layers of physical and emotional experience that the dancer embodied.

Living In the Moment, choreographed by Mikhail Morris - danced by Morris himself, alongside Benton Morris, Renaldo Barrett, Dorrian Brown, and Brandon Owusu - ended the evening with a spectacular, epic expression of “spiritual connection (African) and experience of one’s past whether it’s good or bad in the abstract format of expression, of one’s soul in the present day.”

The overall evening was a strong and engaging testament to twenty years of Dance Immersion’s commitment to a diverse range of social and political themes within past and contemporary cultural environments. Vivine Scarlett’s (founder, program director, curator) program notes state clearly and powerfully the company’s mandate as she articulates the value of this recent celebration of men in dance;

“In recognition of the contributions by all men who continue to expand their knowledge, raise children, and engage in a multitude of activities that result in positive contributions to themselves and the world; this presentation dismisses the violent images we see and hear about Black males in the media. It is designed to offer a positive view of dance styles representative of the diverse voices that contribute to the Canadian arts ecology..” 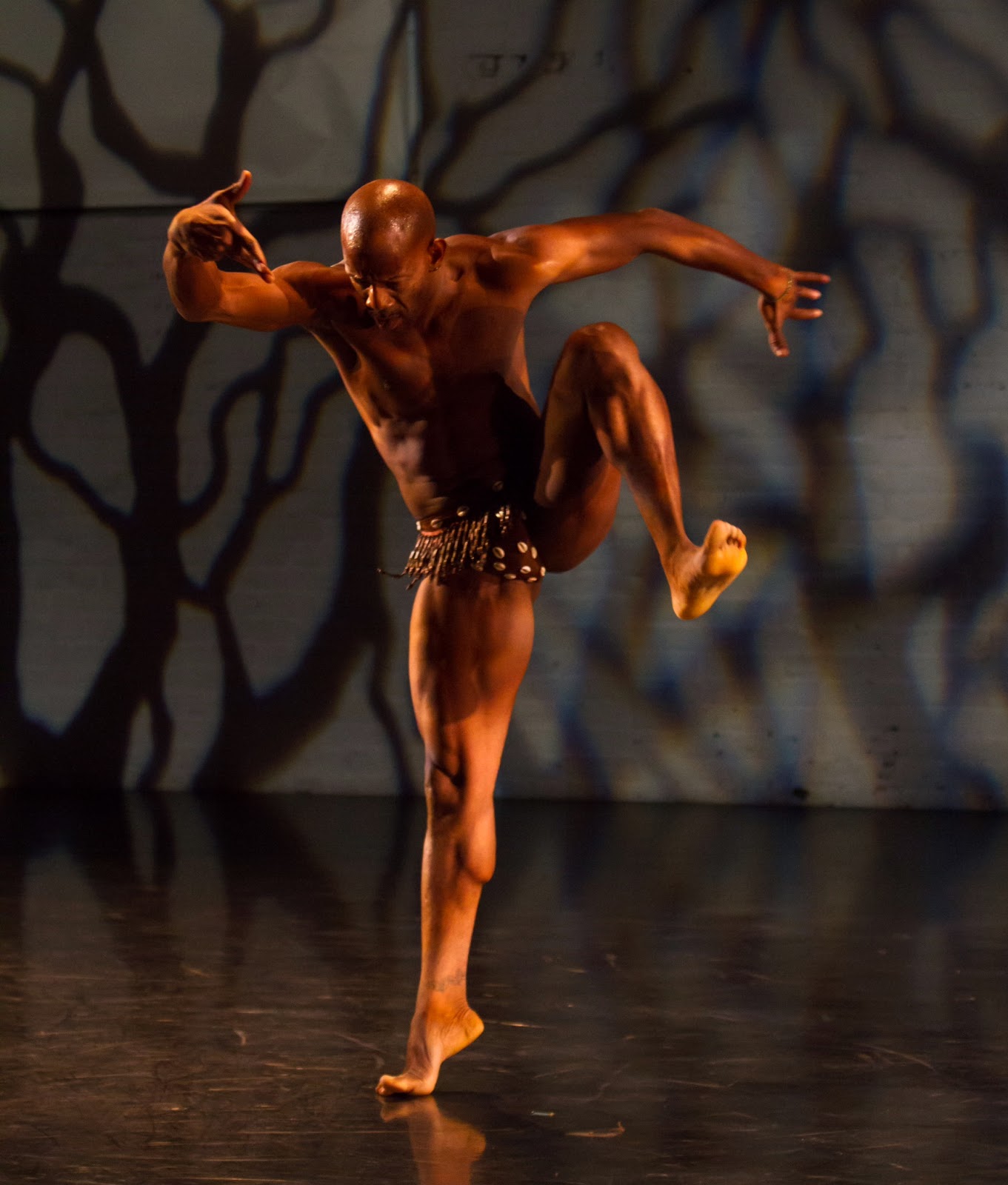