FACTORY THEARE - A LINE IN THE SAND

"How far would you run in order to escape from yourself?" ...

"Do we ever learn anything from war?"
Nigel Shawn Williams
- Director's Note for A Line In The Sand

At the heart of Guillermo Verdecchia and Marcus Youssef’s 1995 award winning play, A line In the Sand, lies a deep distrust in popular notions regarding ‘Canadian’ identity. Are we friendly? Are we civilized? Are we a peacekeeping nation when it comes to war efforts? Is the term peacekeeping, when it comes to war, a bit of a Canadian’ized oxymoron? Are these questions too broad, and part of an implausible over-arching narrative that can never be fully realized? Who knows…

The current remount of this stylishly unnerving script raises these timeworn questions for a twenty first century audience whose national consciousness continues to be questioned, re-examined, and re-evaluated by complex critiques of past, historically catastrophic, and extremely shameful national practice - ranging form residential schools to internment camps, environmental debates, and the irrelevance of youth and beauty when it resides in the body of a Prime Minister - tra la. But this is a play about the first Gulf War - drawing lines in the proverbial sand that reverberate with a multitude of issues relevant both globally and trans-historically.

By placing an ensemble of three men within the raised parameters a confined, sandy, dais (a hopelessly ropeless boxing ring of sorts) - with spectators on two sides of the ‘ring’ - director Nigel Shawn Williams has created the perfect playing space for this brawl of emotions, interrogations, and love lines that are never fully actualized until the much anticipated climax - a climax that is subtly animated and anticipated throughout - and yet, like so much marginal romance, never fully exposed or explored in the script or the production.

This may be the only weakness - and paradoxically - the greatest strength of the show. The homo-erotic tension at the outset might have relied more heavily upon silent physicality and the unspoken body language so prevalent among men who may possess varying degrees of discomfort when it comes to open same sex desire. Had this been the case - an intense, smouldering sense of bodily attraction - then the climax might have become a more sympathetic rendition of war crimes that involve sexual idenity. But is that what is needed  or appropriate — sympathy? - in a play that reveals the frequent brutality integral to military presence - a brutality that is too often found within what could - and should - have remained relatively 'peaceful' situations.  As the program notes suggest, “the murderous actions of the Canadian Airborne Regiment[s] actions in Somaila” played a significant part in early discussions that led to the creation of A Line In the Sand. 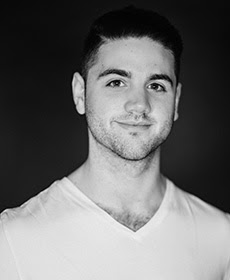 Danny Ghantous as Sadiq
Danny Ghantous as Sadiq, the young Arab man, gives a brilliant nuanced performance ripe with a fresh, personable  presence as he does his level best to befriend a brittle, repressed Canadian soldier who he meets - in the sand. The writing and direction has used the symbol of sand - and the very physically disarming instability of a sand covered stage - in a meta-theatrical manner, allowing the actors to use hands filled with grains of ungraspable, flighty matter as a multitude of props - ranging from photographs to cameras and naked palms as massage tools that bear a love that  begrudgingly dares to speak its name. 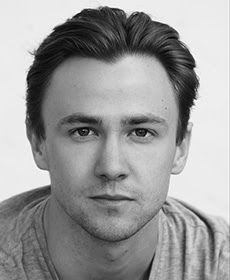 Morgan David Jones as Mercer
Morgan David Jones as Mercer matches his co-stars performance with a subtle - exploding into terror and a form of silent blistering shame - with a subtle attention to fragile forms of heterocentric masculinity. Although effective and skilfully constructed, these nuances might have been directed to hit higher, more eroticized notes from time to time in order to make the same sex elements less marginal when it comes to the intimate confines of a deceptively expansive desert ‘closet.’ 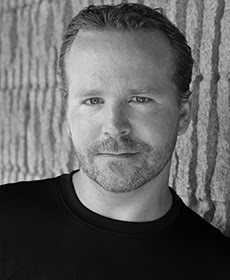 John Cleland as the Colonel
John Cleland as the Colonel rounds out the ensemble with a character whose extreme marginality in the first act becomes a layered, complex dominating force by the end. The unsettling, interconnected surprises from the Colonel’s past stream seamlessly from Cleland’s flawless characterization as he furthers the general narrative sense that there are no hero's, no peacekeepers, and certainly no winners when it comes to war - simply because it never should have happened in the first place.

A final speech from the young Arab man sums up the overall sense of hopelessness that the script so brilliantly and affirmatively handles throughout. Characters have exposed themselves and have been exposed by others in complex ways that create a bubbling an baffling suspense from start to finish. And yet, nothings ends, nothing finishes by the end of the play. We can only listen carefully to Sadiq’s final speech and try to sadly embrace an appropriate lack of forgiveness entwined with a certain kind of terror laden love that homosexuality and military presence have, historically - and all too frequently - proven to be terribly strange bedfellows. Well, so much for that spoiler alert… 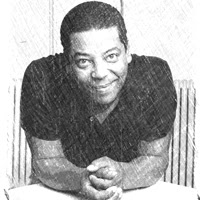 FACTORY THEATRE - A LINE IN THE SAND 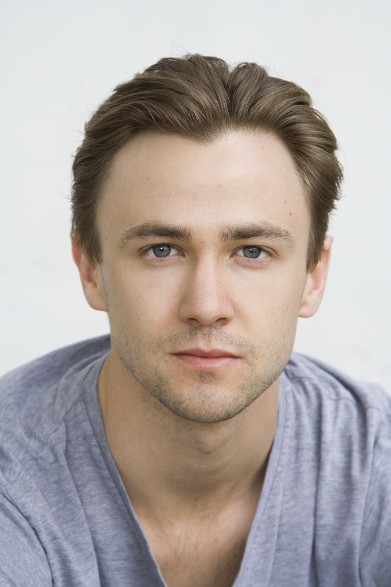 "Then not only working opposite Cate Blanchett but having to make out with her. She’s kissed Brad Pitt for goodness sake, no pressure of course."

Morgan Daivd Jones on his role in A Streetcar Named Desire

A LINE IN THE SAND PLAYING AT FACTORY THEATRE
also starring 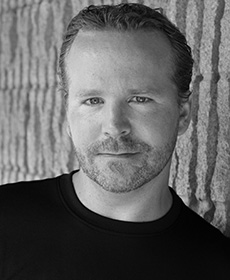 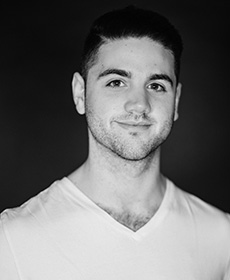 There’s a thin line between bravery and brutality.

Nigel Shawn Williams directs the gripping story of an unlikely friendship between a Canadian soldier and a Palestinian teenager that goes horribly wrong in this Chalmers Award-winning play set against the backdrop of Operation Desert Shield. With issues that are just as relevant to Canadian society today as they were nearly two decades ago, the play forces us to challenge our national myths and confront the brutal acts committed in our name.

what kind of challenges did this role present for you?
MORGAN DAVID JONES

My biggest challenge was mapping out Mercer’s emotional journey. I found that I wanted him to have a linear story but that failed on many accounts. One, funnily enough, Guillermo and Marcus didn’t write it that way and I also found myself trying to link his journey to the way I, Morgan, would react. Once Nigel and I found the right emotional anchor I was able to explore what made Mercer tick. Having that allowed me to create the boundaries of his emotional life and I was able to play and discover in a more organic natural way.
how is the play of particular importance for Canadian audiences n 2016?
MORGAN DAVID JONES
For me A Line In The Sand is extremely important to modern Canadian audience on a few levels. It is fantastic to work and rework Canadian ideas and tell Canadian stories. Being able to collaborate with the writers, directors and all the creative team is so necessary and gloriously important to build fresh new Canadian work.
It is also relevant to challenge audiences; to ask hard questions as well as to present truthful facts. By doing so I believe it allows the audience to relate and then ask how they are responsible. For me, that is theatre I love to see and be a part of.
this appears to be a very different kind of challenge than your work with Streetcar Named Desire. Can you talk a bit about the differences in approach for the two roles, and what it was like to be part of a high profile touring production with an internationally acclaimed film actor in an iconic role?
MORGAN DAVID JONES
Yes, these are crazy different productions. The biggest difference is having the responsibility of telling this story throughout every single second of the show. In A Line In The Sand I am on stage the entire production. This is a wonderful challenge that I honestly love.
With A Streetcar Named Desire, my responsibility was telling one scene and effecting change from one character. It was a dream role in an incredible production. I’m going to be honest and let you know how ridiculously nervous I was throughout the whole run of the show. The first week I was convinced they had offered the role to the wrong “Morgan” and they would ask me to leave. Then not only working opposite Cate Blanchett but having to make out with her. She’s kissed Brad Pitt for goodness sake, no pressure of course. What was wonderful about this is that it fueled my performance. I used every ounce of nerves to drive that character and it was an honour to be internationally recognized for my performance. Working with Cate and Liv was amazing. I honestly had a wonderful time and would jump at the chance again, obviously. To be in a production that was so huge was scary but utterly fantastic. I met my acting idol Meryl Streep. It was surreal to talk to The Meryl Streep about my performance. I may have wet myself a little.
as an LGBT artist do you find that your identity influences the roles you take on in particular ways?
MORGAN DAVID JONES
To be honest yes and no. I am an actor who happens to be gay. I connect with stories of hardship or personal struggles on many levels not just because of my sexual preference. I also think it shouldn’t matter if an actor is gay or not or anywhere in between. All that matters is if that actor can embody the character wholeheartedly.
In short I take roles that I connect with or roles that are a part of a story I am passionate about. I always strive to be as creative as possible and if a role can challenge me at the same time by making me see the world differently, perfect.

About the Director
NIGEL SHAWN WILLIAMS

Nigel Shawn Williams is the Associate Artistic Director of the Factory Theatre.  He is a 4 time Dora Mavor Moore Award winner as an actor and director, with numerous nominations for MECCA and Betty Mitchell Awards. His theatre credits include four seasons each at the Stratford and Shaw Festivals, as well as performing in Montreal, Toronto, Winnipeg, Calgary and Vancouver. His theatre career includes credits of over 20 years as an artist.  His productions have garnered critical and artistic success, and he continues to work actively as an actor and director collaborating not only with Factory Theatre, but with theatre companies throughout Canada. Nigel is also heavily active in new play development and has helped develop over 40 new plays either working as an actor, director or a dramaturge.  He is also an educator, having taught courses at both York University and the University of Windsor.  He has been, and continues to mentor young and emerging artist through the difficult transition from training schools to professional life. 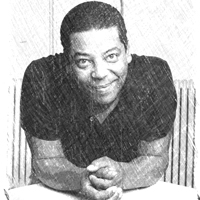