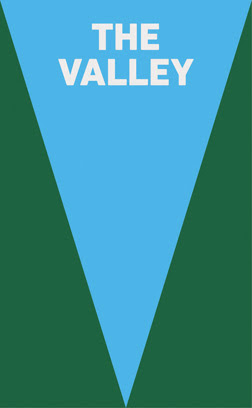 THE SUM OF ITS PARTS

The first hour of Joan MacLeod's recent play The Valley feels like an unfamiliar old soap opera you have never seen before and have trouble understanding just what the characters are going through. If the playwright is familiar with the kind of turmoil she explores in her new family drug and depression drama it is not easily apparent in the opening sixty minutes. Re-shaping and editing half the first act into a more concise and engaging thirty minute back story for the four interconnected characters could make this meandering two hour narrative into a sharp and explosive interrogation of familial relations, addiction, depression, and the particluar battles confronted by individuals living in our westernmost metropolis. But the metaphors of valley and mountain never quite take off, and the explosive scenes that save the play at the end of the day are just placed too late to make the overall experience a totally fulfilling one. But, alas, this could be the nature of the play and its subject matter - that long mind numbing journey through addiction, disbelief, despondency, depression, what have you - and the violent confrontations with the problematic yet frequently necessary policing of these timeworn battles. 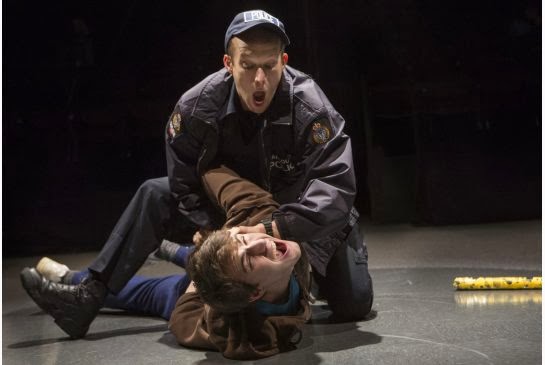 Direction by Richard Rose is superb, as he arranges his cast onstage for the entire piece, giving the final scenes an intense, cloistered and claustrophobic kind of group therapy effect where everyone sees everything and everybody all of the time, thereby allowing them to witness the intersections and inter-connectedness that the formula for the play depends upon, yet only fully attains in the final scenes. Set design by Graeme S. Thomson is superb as a semi in-the-round effect, with furniture arranged so nothing is missed, heightens the directors attention to triangular and intense emotional and physical confrontation at the core of the two very separate yet related narratives. But the laying out of the back stories just moves much too slowly into the real action of the second half.

Performances by an ensemble cast are stellar. All of the actors move effortlessly, with great emotional power and grace through somewhat banal opening conversations toward a very powerful climax. But the connections and the topical details are too often left up to thinly constructed metaphors and plot lines that do not do the city of Vancouver and its diverse population justice. The Valley begins with too many lows, and when the highs are finally achieved they are moving, beautifully written, and beautifully performed, but bogged down by the sum of this plays many layer-less parts.

THE VALLEY RUNS AT TARRAGON THEATRE UNTIL DECEMBER 15TH
Posted by bette at 11:43 AM No comments: 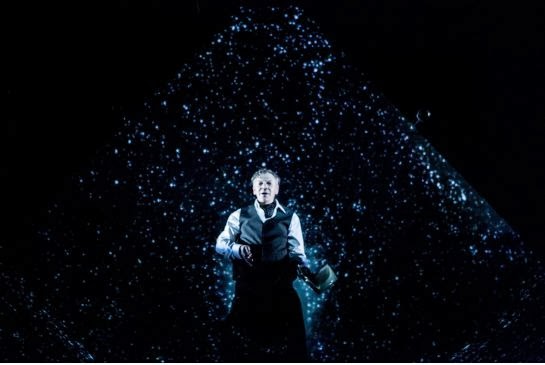 The current two week run of the Robert Lepage masterpiece has aged exquisitely. Given huge strides in technology over the past twenty years, and a revamped cast with two actors instead of the solo performance by Lepage himself twenty years ago, this is pure surreal theatrical magic as acrobatic performances have two gifted actors clinging effortlessly to a set that appears to float in mid air.

Marc Lebreche gives a subtle, charismatic performance as Cocteau and the contemporary artist suffering from romantic and cultural discord and finding infrequent solace in dream like connections to the past struggles of Miles Davis and Jean Cocteau. Wellesley Robertson III creates a gorgeous dance like gestural character that inhabits the set like a formidable ghost commenting silently and seamlessly - by way of extreme physical agility and emotional acuity - upon diverse cultural issues.

The Ex Machina production team has done it again with magnificent projections, lighting, costumes, and sound design. Not to be missed, Needles and Opium gives us a timely and timeless message regarding the multi-national policing of dreams and the cross-cultural conflicts Canada continues to experience as a frequently and sharply divided country of vast misidentifiable contrasts.

As Lepage commented in his brief opening night remarks after the performance, Toronto has recently received dubious international attention. Even with the advent of our mayor's surreal escapades, he remarked that it is a city he has always loved - a city he has been away from for far too long, and has now graced us with yet another magnificent example of theatre as profound and engaging spectacle.

RUNNING AT THE BLUMA APEL THEATRE UNTIL DECEMBER 1ST
Posted by bette at 11:21 AM No comments: 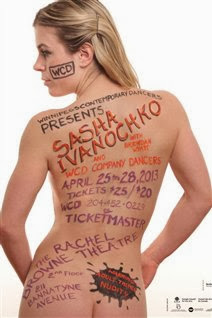 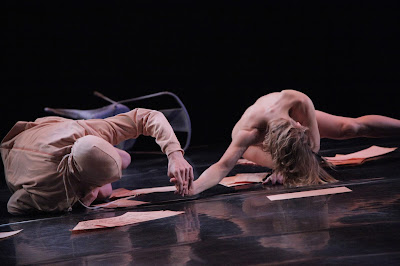 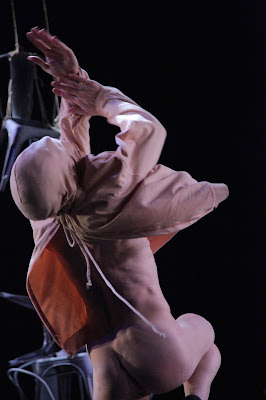 Language is a skin: I rub my language against the other. It is as if I had words instead of fingers, or fingers at the tip of my words. My language trembles with desire. The emotion derives from a double contact: on the one hand, a whole activity of discourse discreetly, indirectly focuses upon a single signified, which is "I desire you," and releases, nourishes, ramifies it to the point of explosion (language experiences orgasm upon touching itself); on the other hand, I enwrap the other in my words, I caress, brush against, talk up this contact, I extend myself to make the commentary to which I submit the relation endure. 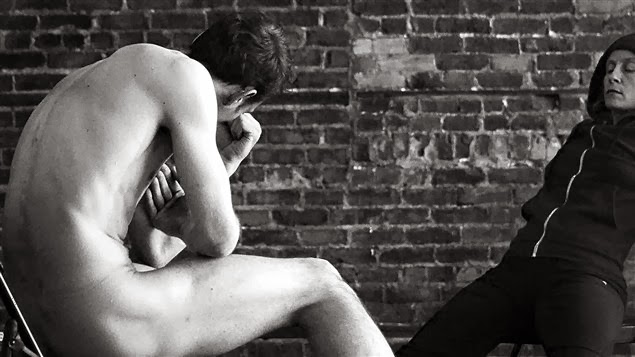 Seated in a beaten up metal chair, and surrounded by a kind of mobile/collage of other identical and evocative furniturial* pieces, Brendan Wyatt's beautiful body opens the hour long naked offering, 'Speak, Love' - currently running at the Winchester Street Theatre.  In the hands of choreographer/dancer Sasha Ivanochko, (at one point the palms of her hands almost cup his mesmerizing 'member') Wyatt's nude corporeal presence becomes a receptacle for a seamless romp, both light and dark, through ruminations on love, sex, and the ultimate recognition of that little iconic triumvirate of words so many seem to crave the sound of.

As the dancers speak fragments from Roland Barthes and Rumi to each other, chairs and scattered sheets of paper become a spare, figurative setting for a stream of intricate movements and pleas by the dancers that appear idiosyncratic and somewhat ponderous at first. But once the wait is over it is well worth the wanton wondrous voyeurism as it all comes together in a beautifully layered physical narrative that flirts with the comic, the violent, the bewildered, and the fulfilling hunger for the coupling of human hearts and organs all in one swellfoop.

A flesh colored hoodie plays a comic - at times fearful - and immensely creative part in the proceedings as the duo's dynamic flesh ultimately becomes one, while the lofty poetic luv utterances lapse into daring and gorgeous, at times hilarious sounds coming from the performer's muffled mouths. Both Wyatt and Ivanochko possess, beyond the obvious allure of their exposed limbs, torsos, what have you, immense vocal and physical stage presence. Ivanochko in particular presents a kind of angry, deceptively neutral, frequently pleading yet always in control manner through a form of measured subtlety via tightly focused facial and bodily composure. Wyatt's voice and expression match his co-stars subtlety as he takes part in highly sexualized entanglements that move in and out of enthralling and skillfully executed choreography that drives home the company name, blackandblue, with obvious and thrilling physical force.

Director Dan Wild, in collaboration with the dancers, has staged a beautiful and provocative piece of dance theatre/performance art that thoroughly validates Ivanochko's feeling that "the nudity is not to titillate but to allow expression of aspects of a couple's relationship." Absolutely - why give titillation a back seat when it can be choreographed with such power and grace, literally taking the human body into one's own hands, caressing, thumping up against, and slithering in and out of so many godgiven nooks and crannies in a fabulous attempt to reveal that love dares speak its name in an endless variety of verbal and corporeal outbursts.


* 'FURNITURIAL' IS A AN ODD WORD THIS WRITER MADE UP, A WORD THAT HE FEELS IS WORTHY OF THE SPARE, SURREAL AND EVOCATIVE SCENOGRAPHY CREATED BY MARGARET KRAWECKA, THE MARVELOUS MOOD ENHANCING SOUND DESIGN OF CATHERINE THOMPSON, AND THE DISCREET, HOODIE INHABITED, AND UTTERLY VERSATILE COSTUMES DESIGNED BY TANYA WHITE

RUNNING AT THE WINCHESTER STREET THEATRE
UNTIL NOVEMBER 23RD

4 performances only! November 21st – 23rd, 2013 at 8pm and a 4pm matinee on the 23rd. The Winchester Street Theatre, 80 Winchester Street, TorontoTickets: $20 or 17.50 for students/seniors/artists and available through Brown Paper Tickets at: http://www.brownpapertickets.com/event/456890 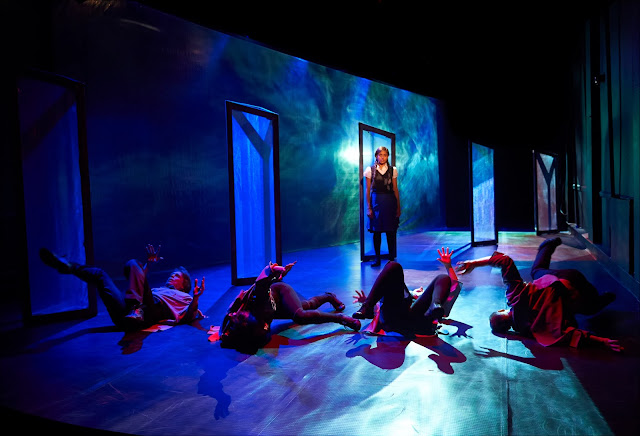 The world premiers of Theatre Gargantua's The Sacrifice Zone is a beautifully rendered multi layered melange of sight, sound, movement, and superb ensemble acting. Set within an unspecified locale of great natural beauty that is being threatened by corporate enterprise, the narrative focuses upon the lives of various families caught within the allure of money making projects that claim to ultimately renew the land when
in fact environmental nightmares become the only foreseeable outcome.

Director Jacquie P. A. Thomas has intricately blocked a superb cast into a seamless plot line that blends beautifully with near acrobatic movement that fleshes out a very simple story into a haunting  cautionary tale regarding life and love and how these timeless constructs depend so profoundly upon the welfare of the earth they inhabit. 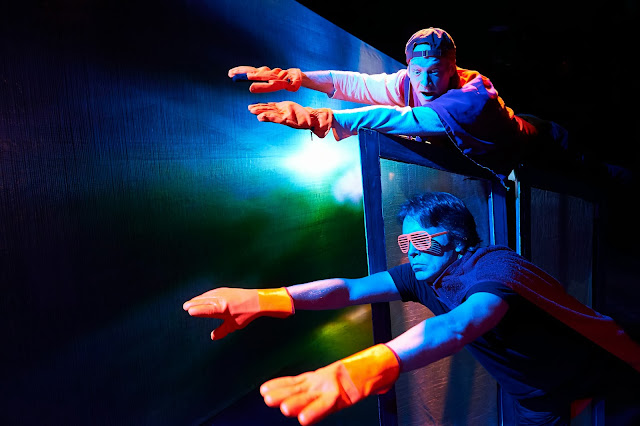 There are moments when a naive, childlike super hero narrative, and romantic interplay suffer slightly from a lack of emotional detail, and yet the nature of the tale being told is in fact a very clear uncomplicated one that might have been clouded by too much attention to more complex characterization. These are very straightforward people working hard for a living within a very complex and deceptive corporate environment. The ensemble musical vocal work that ties scenes together, combined with the accomplished physicality of all the actors turns Suzie Miller's very direct, interwoven script into a grand theatrical morality tale about the cost of progress and the ways in which we often rationalize our complicit nature by separating our individual actions from what appear to be larger, corporate based  strategies. 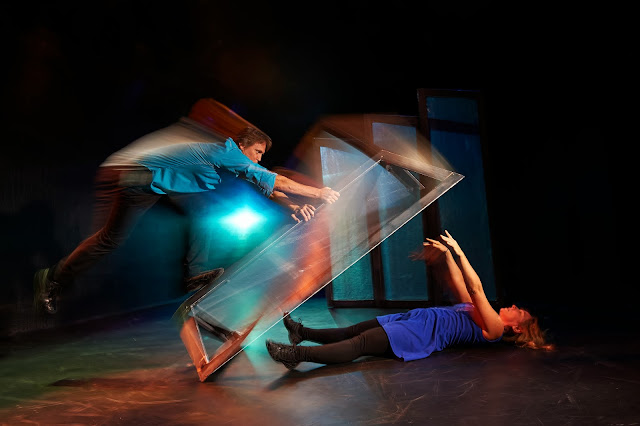 At great cost to life, love, and the natural sites we choose to inhabit, the self serving sacrifices we make as we manage, exploit, and define those sites comes across as a strong, emotionally charged tragedy made haunting, beautiful, and damned by a team of artists who know that words are not enough. The powerful movement, sound, and shapes created by Theatre Gargantua, signatures traits of the company's multi-disciplinary mandate, are shown to great effect in the current production of The Sacrifice Zone, and continue to secure their place as one of Canada's foremost multi-disciplinary theatre companies.

THE SACRIFICE ZONE RUNS AT FACTORY THEATRE UNTIL NOVEMBER 30TH
Posted by bette at 3:16 PM No comments: