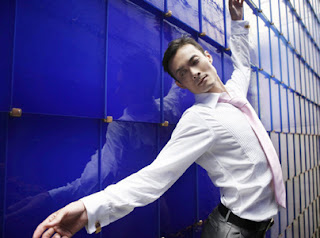 Eight Ways From Mara, Zata Omm’s current dance project, being presented at the Enwave Theatre (Harbourfront) until October 23rd, is an ambitious seventy-minute tour de force led by dancer/choreographer William Yong. What begins as a rather stark, somewhat bewildering mélange of physicality that plays with daily bodily rhythms from group walking and running to human sculptural tableaus, gradually moves into a glorious and meticulous series of tableau vivant come to life. About ten to fifteen minutes into the evening, once the somewhat plodding introduction has ended, a flurry of activity emerges that thoroughly engages the audience through an eclectically philosophical and technically infused narrative.

Concise, perfectly blended textual moments by Hume Baugh mix seamlessly with complex and intricate lighting design by Rebecca Picherak, and large evocative video performance and imagery from Elysha Poirier. There is a cool vivacious energy that runs throughout and treats spectators to a Beckett like search for truth and wisdom. By turning ideas of ‘God’ and spiritual truth into a frequently joyful canine love story, Yong gives us a non-linear narrative as comical and as poignant as a classic Lassie tale.

Andrea Rocca’s eclectic soundscapes - ranging from techno-fied Barry White moments, to an eerie and whimsical piece reminiscent of big band staples such as Sing Sing Sing and Big Noise from Winnetka - enliven the final sections with a tremendous form of original pastiche that brings the evening to a subtle and circular finale. The ending, however, is needlessly reminiscent of an introductory group pose that might have been reconsidered as a time consuming, unengaged, and superfluous framing device that doesn’t quite gel with the rest of the onstage action. Nevertheless, the overall experience, inspired by Eastern Philosophy’s use of Mara, the demon of temptation, creates beautiful images throughout, and offers a gorgeous same sex coupling, a fabulous ensemble bathing suit sequence, as well as a brilliant solo by William Yong.

Yong’s solo highlights the dancer’s willowy agility, and reveals his approach to the body as a fabulous receptacle for unexpected physical contortions. Yong has the ability to produce the startling effect of great simplicity, power, and impeccable timing in each fluid movement. Likewise, dancers Heather Berry-MacPhail, Kate Franklin, Erika Leigh- Howard, and Nicholas Melymuk execute the same kind of willowy grace and muscularity that Yong creates in his solo. This tightly conceived physical thread produces a truly collaborative effort that gives Yong’s choreography an exciting gender blurred motif, defying divisions between masculinity and femininity, and placing the dancers in single and group settings that defy traditional roles. This allows for the two men and three women to create a kind of loves labors gained storyline that effectively evokes powerful and graceful images addressing a rapidfire progression in contemporary culture that subtly, yet radically alters the nature of temptation, desire, and the ways in which we interact with mediums that are simultaneously spiritual, romantic, and technological. 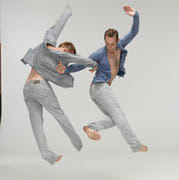 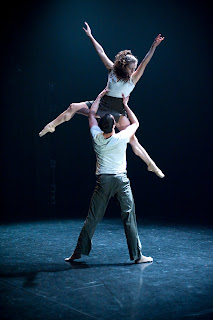 Four exciting and boldly athletic new dance pieces are currently being premiered at the Fleck Dance Theatre by Proartedanza. This one hundred minute tour de force features magnificent choreography and breathtaking dancing that becomes a seamless and enthralling marriage of music and movement.

The North American premiere of Robert Glumbek’s Verwoben (2008) was inspired by “the concept of intertwining or weaving together . . . in response to music, human interaction and surrounding conditions.” Dancers Marc Cardarelli, Mami Hata, and Brendan Wyatt implement these complex movements, to Beethoven’s Cello Sonata No. 3 in A-Minor, with an intricate and breathtaking finesse. In the context of the overall program to follow, the music stands out as perhaps the most traditional, at times belying the fluid, knot-like movement that brings the dancers into a variety of startling configurations that a single same sex coupling literally lifts and carries bodies in and out of. On its own the piece works beautifully as a kind of post-modern semi- balletic study. In the context of the entire evening, it whets the appetite for the very bold and explosive pieces to follow, and stands alone as a beautiful classical inflected piece of choreography. Judiciously placed at the beginning of the evening, Glumbek’s piece excels as a grand titillating preview for the explosive mix of music and choreography to follow.

En Parallèle (2011 - Toronto premiere), choreographed by Proartedanza’s Artistic Director Roberto Campanella, initiates what becomes, over the course of the next hour, a startling at times staccato evening of bodies and dance that embody a truly seamless and stimulating mélange of sound and corporeal image. Dancers Tyler Gledhill and Marissa Parzei create a stunning “universe controlled by fixed physical laws” in a sharply nuanced “encounter [that] hinges on a fleeting moment and absolute blind chance.” The fleeting quality of the movement and the ‘blind’ desire of the tonal gestures brings the duo together in vivid, detached images that separate and commingle throughout, giving the piece a simultaneous sense of both attraction and division, filling the stage with a wonderful sense of individual skill and a kind of contemporary pas de deux. Music by Jóhan Jóhannsson and Marc Mellits provides a wonderfully ambient environment for the fleeting blindness that the narrative embraces.

Pearline (2011), by Kevin O’Day, another North American Premiere, utilizes to incredible effect, the music of Son House, an American blues singer and guitarist who pioneered an innovative style featuring strong, repetitive rhythms, frequently played with the aid of a slide guitar. House’s music often incorporated elements of spiritual and southern gospel that influenced artists Bonnie Raitt, Robert Johnson, and John Hammond, among others. With the support of a very unique and eclectic lyrical soundscape, this is perhaps the most seamless offering of the evening as it represents a truly startling and enigmatic sense of music and dance as they move abruptly in and out of each other. Moments of silence combined with bodies that merge into the musicians innovative and evocative rhythms in an exciting manner, reveal both body and sound as inseparable. Through the impeccable timing, delightful comic innuendo, and the very impressive skill of dancers Mami Hata and Louis Laberge-Côté Pearline brings both grand pathos and light humour to the stage.

The world premiere of Guilluame Côté’s Fractals: a pattern of chaos is beautifully placed as it represents, in the context of the whole program, a volatile culmination of diverse yet complimentary choreography. An ensemble of eight dancers* present a truly eclectic cornucopia of sharp, gestural bravado that moves from a sense of Bob Fosse chorus line tableau to comic, almost Stomp-like finesse, never lapsing into what could have been a kind of laborious kitsch citation. The piece continues the program’s unerring mix of music and choreography as they blend seamlessly. An electronic score by Canadian composer Venetian Snares is the pitch perfect accompaniment for this utterly enthralling climax. Côté’s artistry possesses a deceptively symmetrical framework that brings his dance narrative full circle as bodies represent that elusive and gorgeous natural ‘fractal’ phenomenon of “snowflakes, flowers or cloud” as they mingle in “strict order and unpredictable influence.”

Both strict order and unpredictable influence are the hallmarks of this exciting evening of choreography, running at Harbourfront’s Fleck Dance Theatre until October 8th. 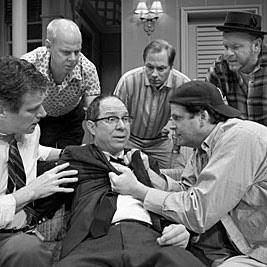 Bigger Than Jesus is a sexy, engaging and charismatic portrait of a white guy who thinks he’s Jesus, or at least someone who has a lot of fascinating information that tends to dispel the myth of the son of God and locate him somewhere within a chaotic contemporary landscape replete with pop-culture puppet shows starring Homer Simpson and assorted characters from Star Wars. Rick Miller’s collaboration with Daniel Brooks, currently running at The Factory Theatre, is a one man tour de force that shines with both technical brilliance and intellectual intrigue. Miller, in the title role as a larger than life solo artist intent upon shedding light on religious fervor, is one of those performers whose vocal diversity and physical presence makes it difficult to miss a beat of his virtuoso perofrmance as he takes over the stage with the zeal of a lithe thespian demi-god.

Perhaps the most memorable moments occur when Miller simultaneously sings a parodic version of a song from Jesus Christ Superstar as he manipulates a variety of tiny plastic figurines being projected behind him on a large screen. The incredible technical effects make this show into a fine example of mutli-media performance art. This is a re-mount of an award-winning must-see with a slightly disappointing religious message at the end that punctuates the demystifying discourse in a rather Christianized hegemonic way. But the ride all the way to the temple is well worth the slight anti-climax.

Soulpeppers’ re-mount of The Odd Couple is a strangely funny study in heterosexual coupling. Neil Simon’s 1965 Broadway hit ages relatively well as one-liners abound and strained conjugal relations take centre stage with the husbands in full regalia and the wives decidedly absent. Albert Schultz as Oscar and Diego Matamoros as Felix match each other with pitch perfect comic difference as this unlikely ‘queer’ couple reveal, in their mismatched bickering, that all relationships, same sex or opposite, can be privy to emotions and contradictions that simultaneously make the individuals involved both the perfect and the imperfect duo. Playing at the same time as Noel Coward’s Private Lives , Soulpepper and Mirvish Productions gives Toronto audiences the chance to compare notes on the writing of two vastly different playwrights who have used comedy in order to show the gaps, the differences, and the commonalities within personalities that are thrown together, and how these personalities frequently test the limits of camaraderie, love, and friendship despite the fact that they simply cannot live without each other.

running at The Young Centre (Distillery District) through October

see review of Private Lives online at In Toronto magazine

David Storch and Trish Lindstrom provide impeccable physical and vocal contrasts to each other as the repressed husband and the sexually ambitious wife. Marci T. House is a wonderful study in mannered, dignified servitude in the role of the nanny who becomes the somewhat hesitant surrogate mother-figure and the objectified muse of an attractive and intrusive artist. Melody A. Johnson’s Sabrina Daldry takes the stage in the form of a prim yet highly eroticized and empowered character, while Jonathan Watton’s marginalized artist character Leo quirkily and frantically reveals the sexual stereotypes and the sexual confines constructed between genders and alternative lifestyles.

Elizabeth Saunders as Annie has truly poignant moments as she allows her character to move seamlessly from the ever faithful medical assistant to the unsuspecting and misled paramour in a wonderfully comic and tender same sex stage moment. Ross MacMillan as Mr. Daldry has a beautifully awkward scene as the irritated husband who boldly misreads the sexual presence of a friend attempting to find her own sexuality within a deceptively sexless environment. Richard Rose's nuanced and physically complex direction brings all of these strained mortal collisions into perfect physical and emotional focus.

running at Tarragon until October 23rd