THIS IS THE AUGUST AT SUMMERWORKS 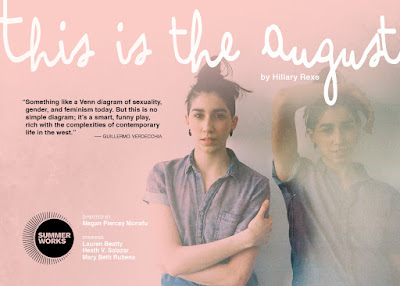 1/ Describe your creative approach to the staging and writing of the play (the initial inspiration and any issues that deeply interested you that you chose to explore in rehearsals and in the creation process).

Hillary Rexe: The inspiration to write “This is the August” stemmed from many conversations I was having with my friends (and with myself) around the divergences in second and third wave feminism (and other ancillary/corollary feminisms).

I was, and still am, captivated by the different ways in which feminists of all kinds approach personal identity and the world around us. The generational differences, which I approach both as a difference in second and third wave feminism and as a difference in Millennial and Baby Boomer perspectives, seem to manifest strongly in terms of a few central themes: gender and gender-identity, the idea of “helping” others vs. co-opting their experiences (this goes as far as foreign policy and as close as speaking for your lover or your child), and sexuality, with a specific emphasis on the objectification of women vs. the empowerment of female/feminized sexuality.

The news is full of conflict like this: trans/trans* issues are famously in conflict between feminists, and there is a clear distinction between Take Back the Night and SlutWalk.

The characters in the play stem from that: a Baby Boomer documentary filmmaker who makes work about marginalized women in foreign countries, who identifies as a lesbian and a second wave feminist; a queer YouTuber who makes work about her sex life and sexual experiences; and a gender-neutral artist who uses the pronoun “they” and just wants to make “pretty shit.”

Megan Piercey Monafu: I'm absorbed by theme of public face versus private face, and how this is immediately obvious in the character of Edie, the rising YouTube star. By seeing her grow from laptop-cam amateur to image-obsessed viral material, and seeing how that affects her everyday relationships, we also then see how the other characters in the play struggle with their own public/private identities in subtler ways. This is an idea I've tried to bring out in our staging and set. The other thing that has been ringing in my ears since our first workshop of the play in March is how feminism is a raw issue for all 3 characters --it's not an abstract concept. Hillary has given us 3 people for who theoretical musings on feminism actually affect their day-to-day interactions. They have so much skin in the game.

2/ Where does the impulse to use live painting and music come from and how have you integrated it into the show both technically and creatively?

Megan: Live creation is one of the most interesting things to be a part of, as theatre makers know. It's exciting to invite audience members to be a part of that in a multidisciplinary way; it's different forms of art, but inherently dramatic. I love working with artists from other forms of art. It's so exciting to sit down with a painter and say, okay, how do we make something beautiful and meaningful for our audience, together, within these theatrical limits? It's truly collaborative between director, designers, composers, technicians, and actors.

Hillary: I absolutely agree. All three characters make work onstage. In particular, Sam sings and paints in an artist-run centre, and there the audience gets the experience of being at a live show, and Edie records her YouTube videos onstage, so the audience gets the experience of watching YouTube videos being recorded, live, and then watching how different they look once they’ve been edited and put online.

3/ The connection to YouTube and the intersections with feminism are fascinating. Is there a specific political message or idea that you are putting forward in the production regarding the interaction between political thought and film, YouTube, and the idea of focusing more on the "important work" mentioned in the description of the play?

Megan: There are several political messages that I see coming through, but one around film and YouTube is how an artist engages their audience. You may have the most beautiful, high-minded piece of documentary film on your hands, but is it accessible to anyone who is not in the doc film circles already? You may have the most viral video on Youtube, but are you getting any message across as an artist or are you merely forgettable entertainment? When talking about something as huge as feminism, who speaks for who, and who is allowed to take part in the dialogue? This is the struggle Edie and Bea have as activists, feminists, and artists using film to engage with the world.

Hillary: Totally. The other piece is around representation. Bea truly wants to do good in the world by representing marginalized women in foreign countries—which raises many questions around representation and truth and who gets to speak for who. Because she is aware of those issues, Edie increasingly chooses to only make work about herself and her sex life, though there is some question about what positive effect that has on the world and whether or not she can evade the problem of objectifying others in her work.

4/ Can you discuss the dichotomies and/or similarities between millennial and boomer, and the idea that a multimedia artist who defies definition can be viewed as an interesting metaphor to/symbol of a contemporary moment when identities and definitions are becoming more and more blurred and open?

Megan: It sounds like you already have a strong interpretation of what our multimedia artist character means! They are a symbol of blurring identities, and the hunger to move beyond traditional identities. At the same time, Millennial, Boomer, or otherwise, you cannot escape your identity as an artist. You can refine it and re-define it, but it is a part of your work even as you may try to hide it. Sam, the multimedia artist, struggles with how to assert themself as a human, as a distinct identity, while rejecting traditional norms.

Hillary: Absolutely. We all move through the world defining others, most often with the language we’ve been given and the experiences that we’ve had. It is very difficult to reject being identified—our culture seeks to add a qualifier when one is removed. So if I say, “I am not a femme,” the question then becomes, “well, what are you?”

About
Live music, painting, and YouTube videos engage and provoke in this darkly funny performance about the intersection of our real and online selves, especially when one goes viral.
Edie is a YouTube star who has just gone viral. Bea, her girlfriend and professor, is a documentary filmmaker who focuses her lens on marginalized women. She wants Edie to stop vlogging about her sex life and focus on more “important” work. Together they passionately negotiate their identities with, and without, each other: Millennial and Boomer, student and professor, lover and adversary. These conflicts of identity come to a head when Edie meets Sam – a multimedia artist who defies definition.
Post content is constructed by Marcato XML importer plugin

Curator's Note
"Vlogs or docs? Second or third wave? Empowerment or power? Either/Or? Both/And? Throw love in there and what have you got? Something like a Venn diagram of sexuality, gender, and feminism today. But This is the August is no simple diagram; it’s a smart, funny play, rich with the complexities of contemporary life in the west." - Guillermo Verdecchia


https://twitter.com/youngprinceTO
Posted by bette at 7:59 AM No comments: