Running until January 5th at the Elgin Theatre -

Do not miss this years instalment of the Ross Petty holiday musical version of The Wizard of Oz. This spectacular seasonal event relies upon powerful performances from the entire cast - with standouts by Michael De Rose as Sugarbum (the stock drag fairy character) and Eric Craig as the Tin Man as they collaborate in a show stopping duet of the iconic pop tune All By Myself.

The arrangement of this anthem like song (Joseph Tritt, Music Director), as a kind of call and response duet, gives the performers ample opportunity to reveal their intense vocal powers  by way of a lighthearted oneupmanship that both entertains and surprises delighted audiences during the gorgeous vocal gymnastics occurring between characters. Coupling the fairy with the Tin Man also creates a sly, flirtatious, and seriocomic romantic crescendo for the two characters who find themselves longing for partnership, community, and camaraderie as they traverse that yellow brick road in search to Oz. And Sugarbum's final landing place in the Emerald City is a wonderful twist on power relations and the collective strength of believing in fairies. 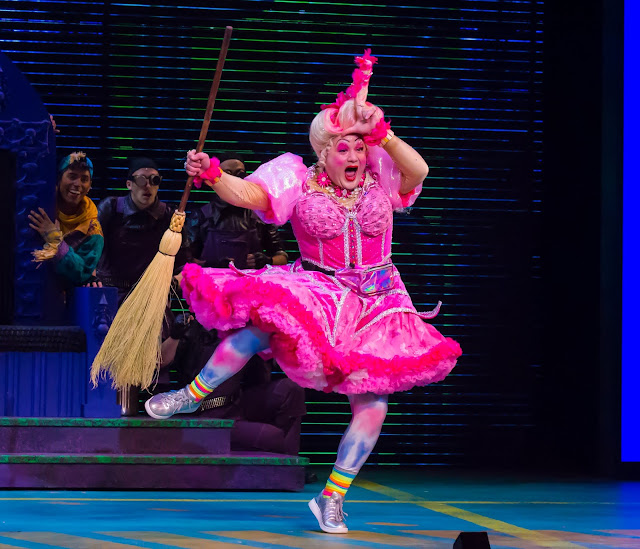 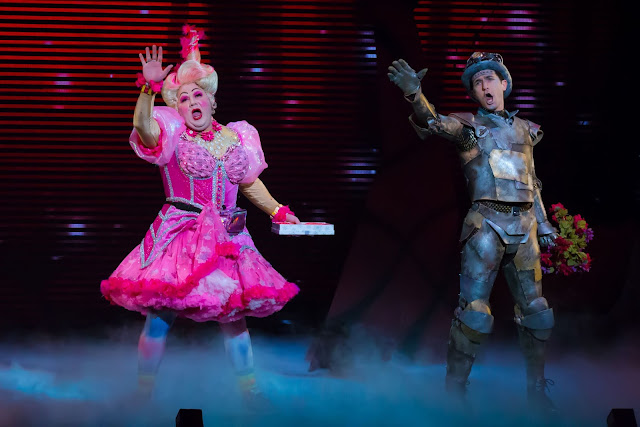 Camille Eanga-Selenge's Dorothy is a wonderful, wise, and wide-eyed characterization as she carries her adorable Toto through a maze of personality and human emotion. Her beautifully delivered solo songs give her great empathy and leadership as she deftly  (frequently putting herself in dastardly danger) manages her comrades along the way. 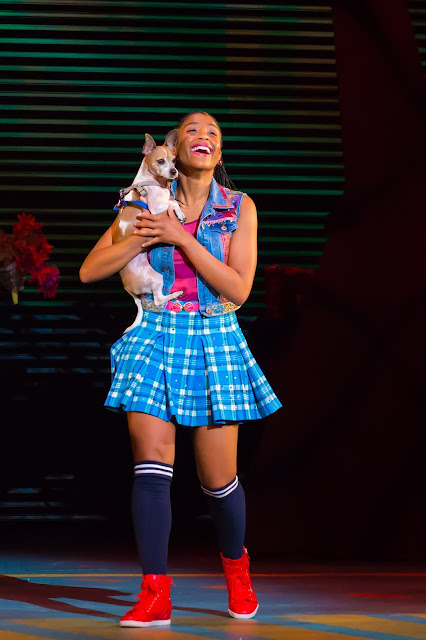 Eddie Glen, in dual roles, takes on an Elton John like quality as he sweeps in and out of the action with great comic power and commanding musical vocals. In his stylish emerald green suit he becomes a collage-like version of iconic figures ranging from Elton to Bowie, and at times even a vaguely reminiscent version of a wiggy, orange'ish upswept shadow of Barry Manilow's once riddled presence. 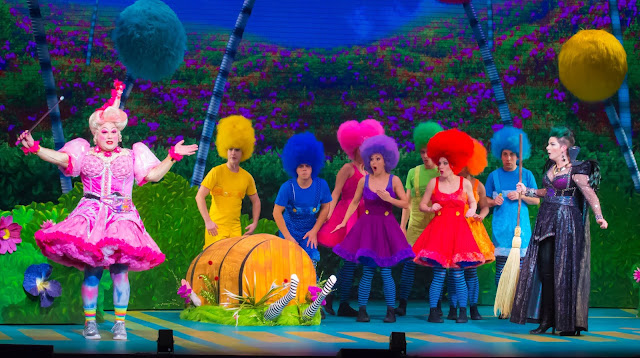 As necessary backup during the long journey along that famous brick road, the Munchkins are constantly involved in fabulous choreography and song by director/choreographer Tracey Flye - whose skill for filling the stage with intricate dance movement and ensemble action is impressive and complex throughout the whole delightful spectacle.

Another standout performance comes from Sara-Jeanne Hosie as Sulphura, the sexy foil for all that happens along the way. Her strong layered musical vocals and detailed characterization, with a wicked emotional range, punctuates the action with the conflict necessary to this coming of age tale of a young woman in search of hearth and home in the midst of a terrible twister of emotion and physical challenge. 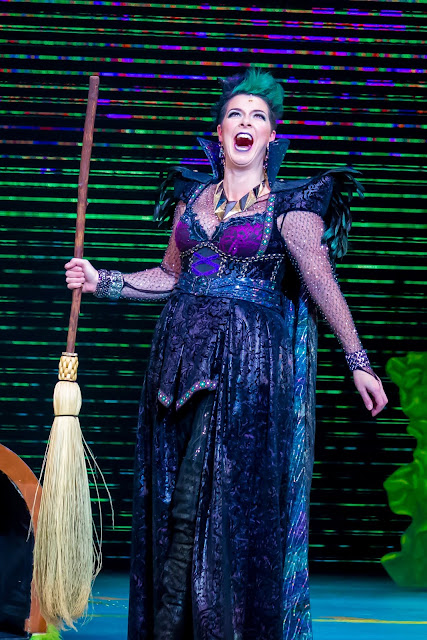 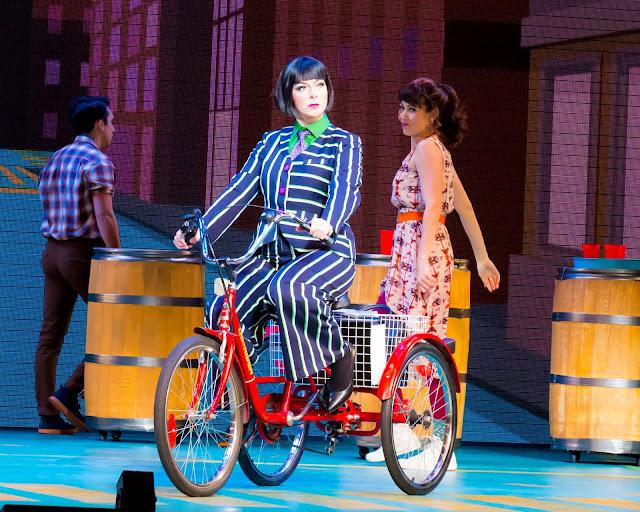 Set and costumes by Cory Sincennes provide bright pops of tone and emphatic cartoon-like shapes that delineate the fantasy-like quality of the overall environment - with dense shades of purple, black, blue, and green sets and backdrops displaying fantastical contrast for the evil moments of Sulphura's loathsome plotting against Dorothy and her friends. The always refreshing 'gay' undertones surface blithely at one point when one of the characters lays claim to the cheerfully citational/liberationist slogan "I am a friend of Dorothy's." Through thick and thin. Aren't we all?

Scarecrow (Matt Nethersole) and Lion (Daniel Williston) round out the cast with remarkable performances that give their loveable characters depth, comic versatility, and musical distinction. And then there is the amazingly well-behaved Olive, in her non-speaking non-barking part as Toto, who is most certainly not in Kansas any longer. She is in a wonderful pastiche of current political Toronto trials, comic interplay, and emotional twists for the entire family to enjoy, grapple, and interact with at this wonderful annual Toronto holiday event. Beautifully rendered this year with a stellar cast, wonderful music, and a version of a great old story updated for contemporary audiences to relate to, revel in and thoroughly enjoy. 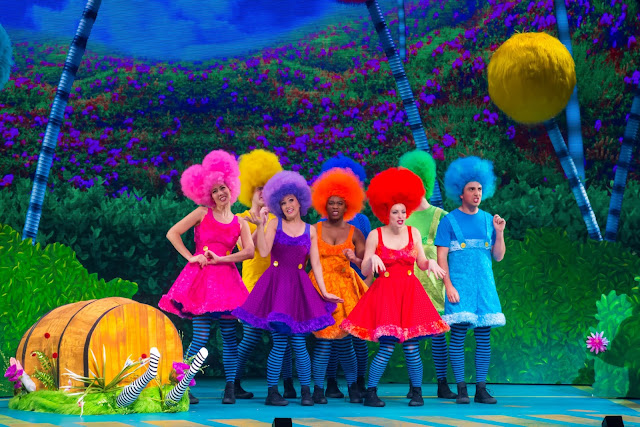 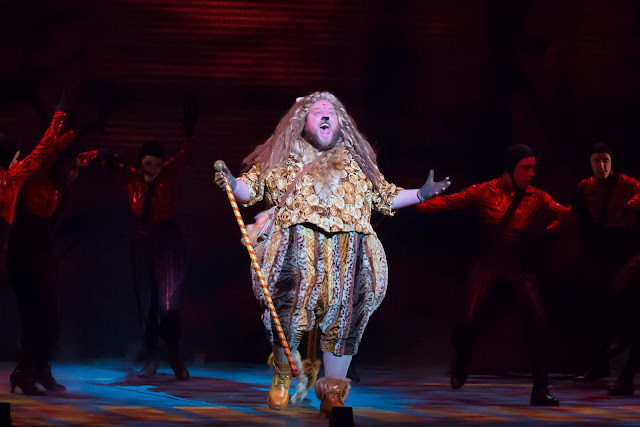 LION - DANIEL WILLISTON (WHO CARRIED A DELIGHTFULLY  'GAY' PURSE THROUGHOUT - NO, IT DID NOT FALL OUT OF HIS MOUTH!!!) 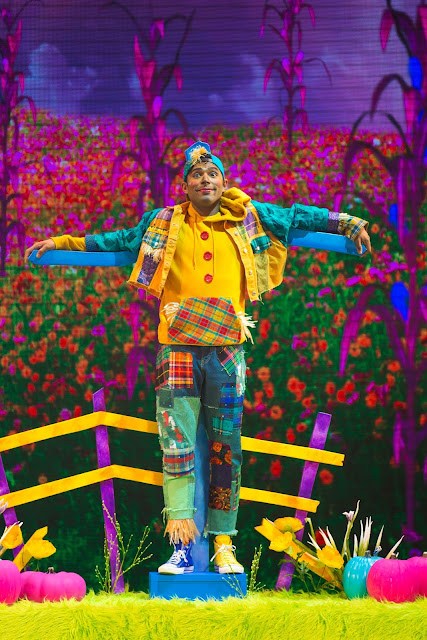 AT THE ELGIN THEATRE
UNTIL JANUARY 5TH
Posted by bette at 8:26 AM No comments:

THE MESSAGE AT TARRAGON THEATRE 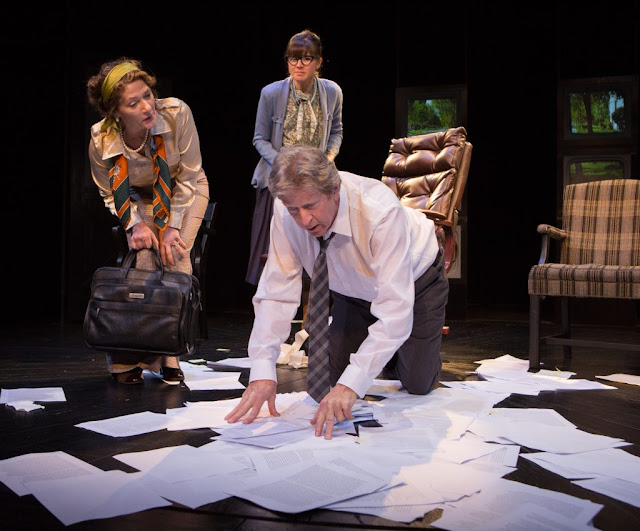 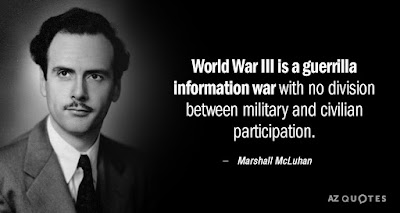 The current run of Jason Sherman’s Marshall McLuhan late life bio-play, after 15 years of a long stall due in part to the McLuhan estate’s* displeasure regarding Sherman’s take on the communications icons life and work, is a timely (perhaps even more timely than 2003) meditation on all that has happened to the world, social media, and the planet in a decade and a half.


With the aid of a stellar cast, R.H. Thomson’s intense and impeccable rendering of a man at odds with language due to serious health challenges is at times painful - even frustrating - to observe as the timeline flips back and forth between his early career and his final days. And yet the comedy that the playwright manages  to insert into the script, the ways in which a trio of ‘good old boys' play with pseudo playboy bunnies, puns, and jokes, give the piece a fast paced rhythm and style that clips along toward an inevitable ending. 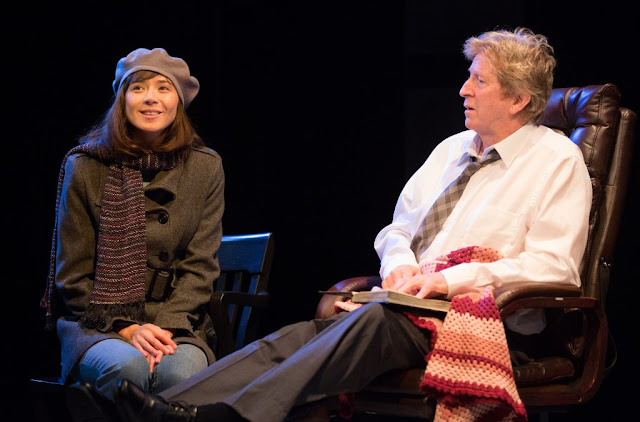 All of the players deliver nuanced, break neck performances, with Sarah Orenstein and Courtney Ch’ng Lancaster inhabiting standout multiple roles as the women who enter the ‘boys club’ and create formidable counterparts who simultaneously challenge and assimilate among the powers that be. Peter Hutt and Patrick McManus, also in multiple roles, round out the ensemble with distinct takes on the men surrounding the whirlwind of ideas McLuhan stood at the centre of - inserting a humorous  at times standup presence, to a serious drama about popular wisdom, wiles, and wilfulness.

The central position McLuhan continues to hold within communications history is, in a brief scene, lightly challenged by the idea that many minds contributed, while McLuhan’s personality, and his way with written words, coupled with the people who moved and marketed him toward celebrity status, were as integral to the McLuhan phenomenon as the man himself. 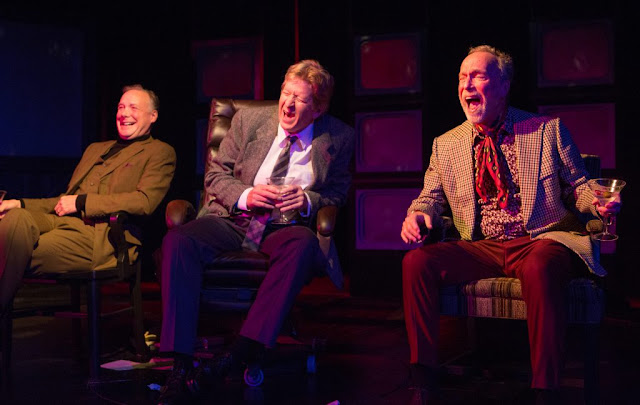 Watching a play addressing the monumental impact McLuhan and his cohorts - colleagues - prophets (what have you) have had on public/popular consciousness drives home many points about where current ‘civilization’ is headed.

If, in fact, the medium is the message, then the Tarragon production, with a moveable set, almost vaudevillian-like appearances behind faux television sets, and tremendous lighting and video design (Rebecca Picherack, lighting - Carla Richie, video designer) brings forward the message in a fully integrated, epic way. The creative team also reveals the effects - onstage - of an industrialized, tech-frenzied century whose still developing/snowballing technologies remain with us as rampant growth both threatens and enhances ‘modern’ life. As the imprint grows the environmental implications increase. 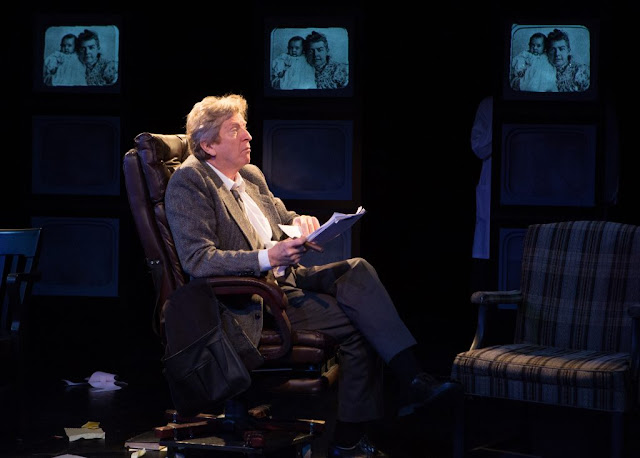 It may be difficult to take a positive message from the dramaturgical proceedings, but overall, the play is a haunting, hilarious, lightly hopeful message about popular fame, the social media, mortality, and marketing in an age and a city where I look out my window, a short stroll from Dundas Square, and all I can see, in Toronto's mini Times Square, are colossal, entertaining and informational examples of McLuhan’s haunting prophesy. A prophesy that, given the milieu he worked within for most of his life (University of Toronto - 1950 to late seventies), may not have been a very prophetic horizon after all - rather, a close look at what he was, by degree, already surrounded and consumed by in a growing urban ‘village’ existing alongside similar global enterprise. 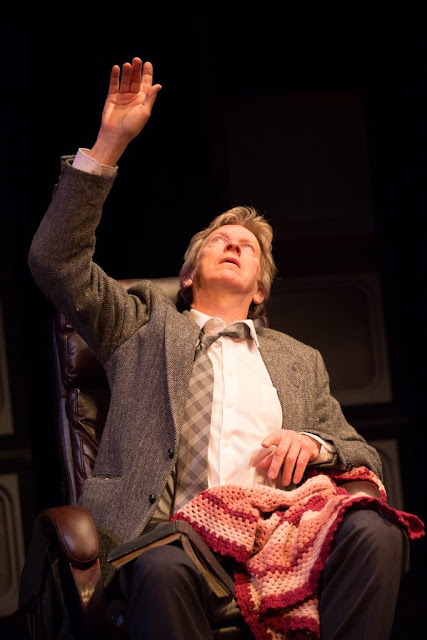 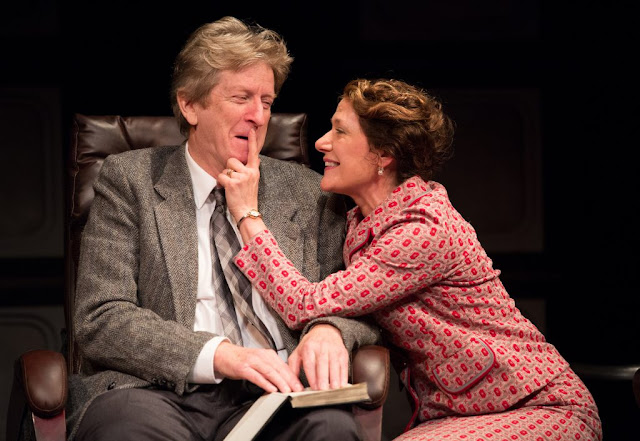 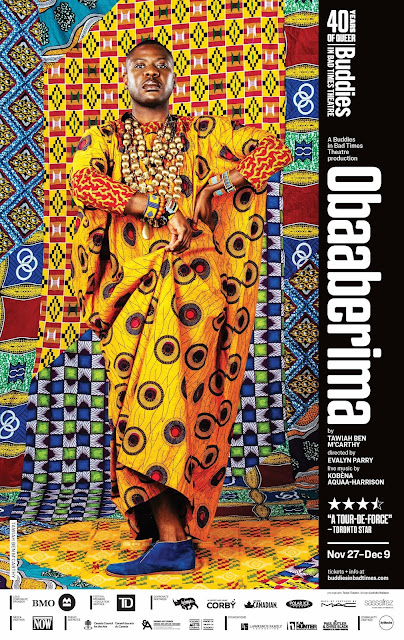 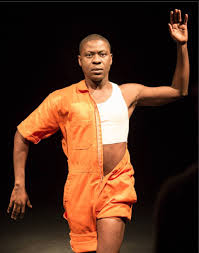 Do not miss seeing this powerful performance in its final five days at Buddies In Bad Times Theatre. Tawiah Ben M'Carthy's incredible solo skill for bringing a variety of engrossing characters to the stage are enhanced by a creative team, under the direction of Evalyn Parry, as the entire crew brings forward a dazzling array of confinement and liberation (set & costumes by Camellia Koo) through the use of storytelling,  lighting, sound and thoroughly integrated and compelling  live music (Kobèna Aquaa-Harrison). 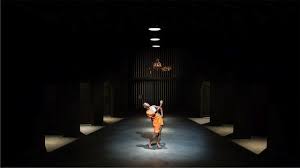 Given the current and controversial issues being addressed at Buddies In Bad Times Theatre regarding, history, inclusion, and sex positive shows that reveal interactive stories occurring between various communities, Obaaberima is an incredibly fitting production as it takes on the intricacies of multiple identities through the social and cultural gaze of sex, gender and race. In an array of gorgeous storytelling, layered vocals (vocal coach Ausar Stewart), and skilfully and beautifully performed dance movement the current production, after an acclaimed cross-country tour, adds further life to M'Carthy's complex journey through diverse cultural experience. 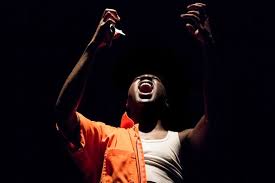 running at buddies in bad times theatre until december 9th