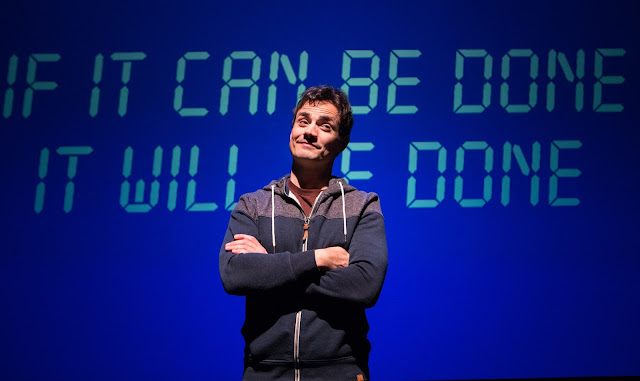 Fabrizio Filippo in The Summoned 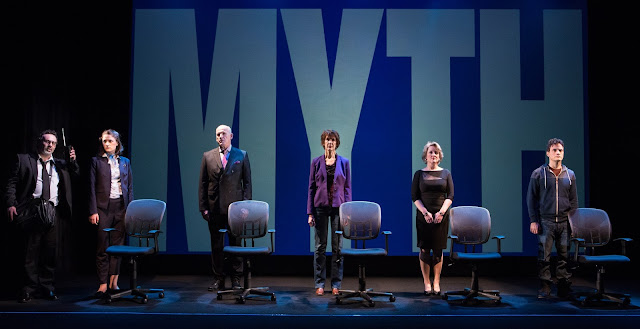 Following the death of a billionaire tech visionary, the most important people in his life are summoned to an airport hotel for the reading of his will. They know their lives are about to change, but what transpires is nothing short of a paradigm shift in the very future of technology and human nature. A world premiere from celebrated Canadian screenwriter, actor, and playwright Fabrizio Filippo.


At the heart of Fabrizio Filippo’s new play The Summoned, is a deep and abiding respect for women that is both endearing and unnerving. In a talkback session this past week an audience member suggested that there wasn’t enough back story for the central female character - the mother. And yet this seems to be part of the very complex point being made in the play, as all of the character’s seem, by degree, both deep and shallow, finally coming together by the end as complex comminglings of humanity and other plugged in planetary sources.

A rich play between humanization and dehumanization takes centre stage. By the end we know all we need to know - and less, and more - than we may care to in a world where humanity is wreaking havoc as technology - and its minions - play sorcerer’s apprentice to what seems to be an inevitable human condition - moving as close and as faraway from our nature as humanly possible.

Whatever nature is - constructed, deconstructed, natural, unnatural, ridiculous, and/or sublime... 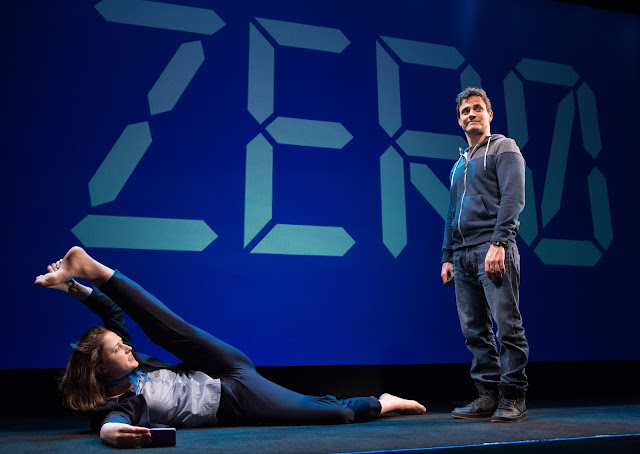 Under the superb direction of Richard Rose, an ensemble cast delivers this skilful, witty, and intelligent text heavy comic drama with amazing dexterity - all directed within a long four foot wide rectangle that gives the up close and impersonal impression of a strained dysfunctional panel of sorts - gathered together to learn, to decipher, to love, and to bemoan the details of the lives they, and their closest colleagues have lived. Details that seem to have gone unnoticed in a world obsessed with the next paradigm shift that shapes our collective minds and our compromised environments… 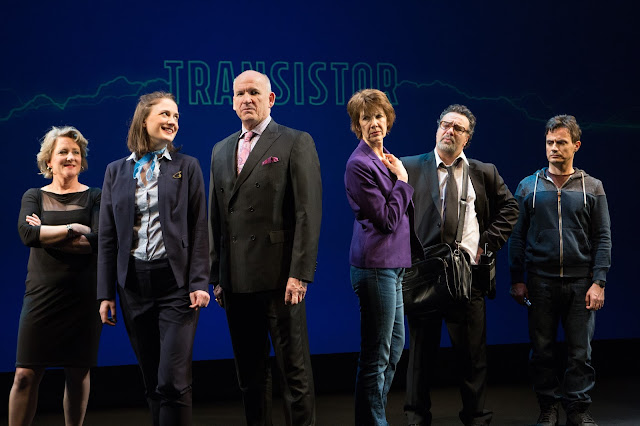 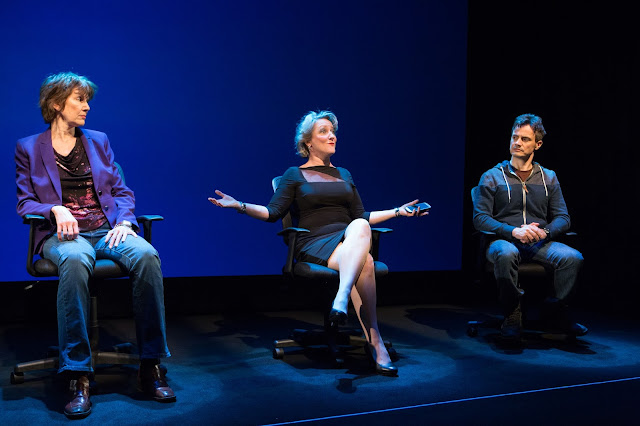 
Writer Fabrizio Filippo takes on a leading role as a narrator and a primary character within a gradually unfolding ninety minute intrigue-laden plot that begins as a complex puzzle and ends as a beautiful testament to human devotion, connection, and deception.

Filippo’s breakneck timing, and his charismatic presence is matched by a cast that embodies the sum of its parts with impressive bravado. All of the characters have starring roles. Tony Nappo is positioned well as the slightly bumbling yet always confident Quentin, lending physical aplomb and sharp edged characterization to an absorbing performance.

Kelli Fox, as Laura, with a fine sense of corporate sexuality and a laugh that never fails to engage and enthral, is dressed to the nines in a form fitting black dress (costumes by Charlotte Dean) that features the sensual power and the fervent finesse of a woman at the top - and the bottom - and the sideways - of her game.

Rachel Cairns as Isla, presents a great youthful vibrancy - replete with physical flexibility and a fun filled persona that flirts and flies in the face of the rampant manipulation that surrounds her.

John Bourgeois as Gary inserts a 'true' cisgendered blend of confidence and comic pathos as his simultaneous fumbling and overpowering emotional catharsis plays on every word. With commanding, versatile presence his performance sees and seizes every opportunity as it arises and dissolves with the flick of an algorithm - whatever the hell an algorithm is. And yet this is the beauty of a text that plays unflinchingly with complicated computer language and gives it a sharp, engaging dose of entertainment value. At the end of the play, a computer geek-filled narrative presents mind-boggling technical content that fills a poetic and dramatic vessel with impeccable theatrical flair. 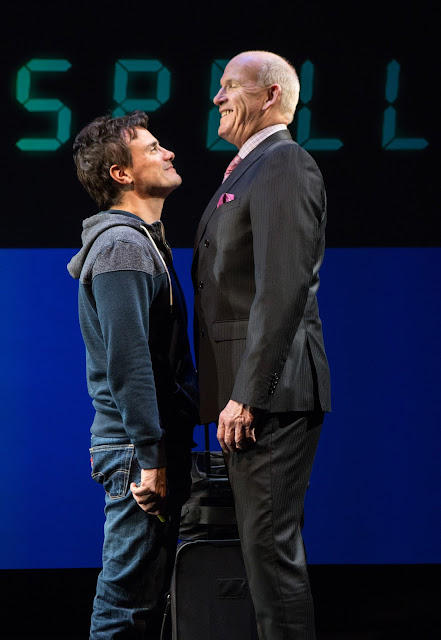 And then there’s the central maternal figure, played with great style and grace by Maggie Huculak, as she paces and traces the stage with immense sincerity and skepticism - forever protecting her domain - a domain constantly configured and deployed by a mostly male ruling class. Her brief summarizing exclamations at the end of the play - concerning her role as a mother - define the character with a subtle smouldering intensity that gives a sharply drawn character subtle depth and concise, non-sentimentalizing emotional import. Too much too soon would have given too much away - too soon. Huculak's Annie is a wise, wonderful, and skilfully created character whose journey is something an audience must read - between, during, on top of, and after the lines - have been spoken...

Alon Nashman’s voice emanating from the walkie talkie - most notably during a final scene with Filippo, adds the all seeing all knowing paternal God-like element. The unseen overseer possesses an eerie detachment that is beautifully and hauntingly framed by Kurt Firla’s vibrant and varied video design. 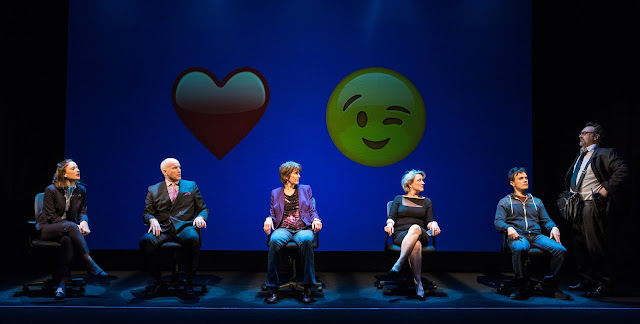 The Summoned summons us all - and asks us - to believe in a future that may somehow be able to take technology and humanity and make them into compatible bedfellows. That remains, as always, to be seen. As one of the actors suggested in the talkback session, dehumanization may not be all bad  - indeed, in a world where humanity does not always know how to behave, to be human. Fillipo poses probing and powerful questions that only future generations may boldly behold - and begin to find some answers to.

But in the meantime - in between time - Fabrizio Filippo has plenty to say about the possibilities as he navigates final frontiers ranging from sexual taboo to lone billionaires whose final gestures may become all-consuming.

Don't miss this fabulous exploration of all we have come to know through the weird, wonderful and wild world of computerland. 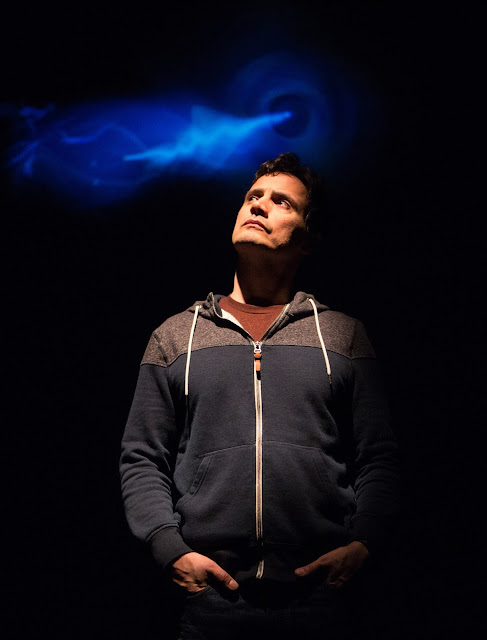 RUNNING AT TARRAGON THEATRE
UNTIL MAY 29TH
Posted by bette at 5:14 AM