YOU CAN’T TAKE IT WITH YOU

Soulpepper’s current production of You Can’t Take It With You is a gem-like period comedy brought to life by a brilliant ensemble that hits every vibrant note of the classic Moss Hart George S. Kaufman vehicle with a grand resounding flair. Performances by Nancy Palk and Maria Vacratsis empower zany comedic roles with a fine sense of timing and physical nuance, while Diego Matamoros as the excitable Russian dance instructor takes a full blown caricature and turns it into an endearing study in fumbling idiosyncrasy. Vacratsis is especially memorable as a final outrageous punctuation to a comic plot that possesses exaggerated elements of Chekhovian dramaturgy. Her gorgeous costume by designer Christina Poddubiuk is matched by the layers of rich and emotive vocal skill that she inserts into the character of a displaced aristocrat at the mercy of a whacked out version of the American dream. All In the Family meets The Simpsons, Father Knows Best, with a touch of  Reba, Roseanne and I Love Lucy thrown into the mix. 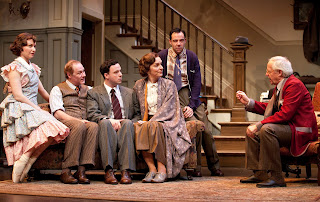 What could have been a dusty old piece of  seventy-five year old American theatre becomes, under the fast-paced direction of Joseph Ziegler, a tour de force for seventeen actors in search of community within a loving, dysfunctional troupe of half-crazed characters. All of the class warfare peculiar to Chekhov’s special form of acute dramedy is trotted out within the impeccable confines of Poddubiuk’s naturalistic set, replete with serpent-laden aquariums and antique printing presses.

And if that’s not enough sharply focused, nostalgic entertainment for one evening, there’s Eric Peterson’s delightful performance as Grandpa to be marveled at. The sheer magnitude of characterization that he inserts into each word and gesture fills the stage with a quirky paternalistic framing device gone wrong - elevating the wit and wisdom of the piece to a kind of grand commentary on the evolution of a kind of North American economic prowess that came to roost over the course of a century that impolitely introduced income tax to the masses. Peterson bumbles through the throes of IRS investigations and romantic mayhem with an illogical form of rationality that boggles the mind and tickles the funny bone. 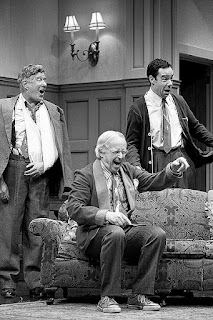 You Can’t Take It With You is a priceless comedy seamlessly crafted into an action packed look at past brushes with capitalism, commerce, and class mingling that continue to affect present plunges into worldwide madcapery.

running at the Young Centre (the Distillery District) through June