What’s love got to do with it…

I only ask to be free. The butterflies are free.
Charles Dickens

The West is the spectator, the judge and the jury,
of every facet of Oriental behaviour.
Edward Said

There are so many clichés and insightful perceptions available regarding the nature of love, freedom, and cross-cultural chaos it is difficult to choose the most effective ones. Three current Toronto productions flirt wildly with clichéd romantic mayhem, sexual behaviour, and issues surrounding social and carnal liberation and they all come up with bewildering yet vastly entertaining non-solutions to a problem we seem to be a little obsessive about here in the west. Love - what do we do about it? From Kris Kristofferson’s iconic claim about the empty nature of certain forms of romantic escapism to Tina Turner’s provocative question regarding what love has to do with anything at all, Soulpepper and Buddies In Bad Times have some sexually appetizing and politically charged recipes for audiences to savour.
ARIGATO, TOKYO 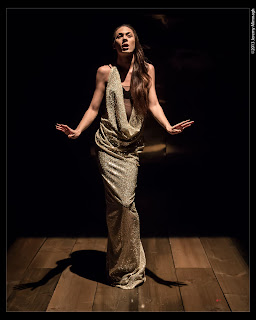 Daniel MacIvor’s Arigato, Tokyo attempts to unpack cross-cultural cliché’s about Japan and delves into the timeworn abyss of the Madame Butterfly narrative. A stellar cast takes spectators on a sexy journey through a Canadian writer’s foray into global tourism with a lot of sex and drugs to bolster his decidedly self-professed self-obsessed ego. David Storch plays the largely unsympathetic literary icon with an impeccably brash bravado that can be difficult to watch when he moves into the most unflattering kinds of Western mimicry regarding vocal inflection and the ways in which arrogance and xenophobia can mark even the most intelligent voices. MacIvor has flirted with a vague form of queerness and homosociality for a very long time and always has insightful, entertaining, and provocative things to say. Brendan Healey’s direction is spare, concise, and powerful. Cara Gee, Michael Dufays, and Tyson James all give beautiful, standout performances as they surround the central character with forms of ‘Orientalism’[1] that represent (as characters constructed by a queer’ish white pen) sharp critiques of the ways in which cultural stereotypes continue to wreak havoc among the romantically inclined.

There are beautiful bodies everywhere in Arigato, Tokyo. Sumptuous nostalgic, frequently lip synced music provides a strong 'nostalgia for the present' as inter-cultural sounds and images provide melodic dramatic tension within and between scenes. At the end of the play and the end of the day, however, one wonders whether the playwrights flirtation with social and sexual triangles might have gone a little further than the heart wrenching finale, rather than perhaps subtly re-instating particular notions around the ways in which men often fight for the object of their desire and then leave that object dangling like a lotus blossom about to fall. MacIvor did this with great success in Never Swim Alone, and tests his hand once again in his latest homo-socially minded offering. All of these cross-cultural, inter-sexual concerns are, of course, up to individual audience members to consider. I for one was a little frustrated, immensely titillated, and predictably bewildered.

Ultimately this is a must see production of a new Canadian play that tries to explicate the sensational ways in which we can lapse into forms of clichéd talk and physical objectification around the exoticized othered body.

True West takes an even more male-centered triangle fraught with sibling rivalry and demonstrates the conundrums at play in mid to late twentieth century consciousness when a wayward cowboy and his Hollywood screenwriting brother lock horns in their mother’s pristine California kitchen. Stuart Hughes never fails to amaze as he delivers a kind of vigorouos comic masculinity that Mike Ross matches for the most part, yet falters near the end for the pivotal explosion of Shepard’esque dysfunction. His violence is a little too milky and his angst a touch sitcom-ish. Patricia Hamilton as the mother of these two flagrant heterosexuals creates a delightful form of internalized iciness, yet errs on the side of detached control when a more smouldering reflection of her two son’s half -crazed personas might have served her well. Ken Mcdonald’s set, although effective at the outset through its impeccable attention to detail, is a bit too crisp and lighthearted for the one hundred degree heat of a summer confrontation that the characters speak of and escape from as they move in and out of the comfort of a suburban kitchen. Moments of Neil Simon meets Sam Shepard rear their unlikely heads as violence erupts in very cheery passive surroundings. The contrast of human emotion and object emotion (set and character) don’t quite gel periodically. And the plants never really look all that dead, just a bit wilted. A kind of earthy, vibrant Tex Mex ambience might have served the finale better and given the powerful and evocative lighting a more suitable world to inhabit as music, shadows and Graeme Thomson’s fabulous lighting effects give the ends of scenes a wonderful parodic tone well suited to this production of Sam Shepard’s iconic 1980 play.
LA RONDE

Jason Sherman’s clever fast-paced contemporary Toronto adaptation of La Ronde had Stuart Hughes and Mike Ross at odds again in the evening installment of Soulpepper’s well rounded repertory fare. Comic clichés filtered in and out of a script that gives Rosedale a disturbing and intriguing global connection to brutality and sexual collapse. Near full frontal nudity is always a delight, and Ross and Hughes do not disappoint. Hughes is able to represent a smouldering sexual energy while Ross delivers a much more measured buttoned down angst and lustful connection to the women they attempt to hookup with. Standout performances by Maev Beatty, Grace Lynn Kung, and Paul Sun-Hyung Lee grace the stage with diverse levels of corporeal sensuality. Nancy Palk’s direction begins with very sharp, controlled blocking and pacing that quickly seduces the audience into La Ronde’s maze of interconnected narratives, but could have utilized a somewhat more raunchy tone for the sex scenes. Similar to the same-sex connections in Arigato, Tokyo, Palk and her cast have not achieved the kind of wild carnally crazed energy one might have hoped for. Brendan Healy’s same sex kisses in Arigato, Tokyo also lack the form of manic groping head twisting movements any of us familiar with the real life enactment of sexual frenzy might be interested in seeing depicted in plays about these timeworn, relentless energies.

Ultimately, three plays spanning decades of theatrical history flirt wildly with some of our favorite guilt laden pastimes and deliver entertaining products that are well worth the price of admission. But they just don’t go far enough into the wild and wooly psyches that inhabit the scripts, suggesting, beyond the shadow of a stereotypical doubt, that even now, in 2013, alluring butterflies of all kinds are definitely not free.