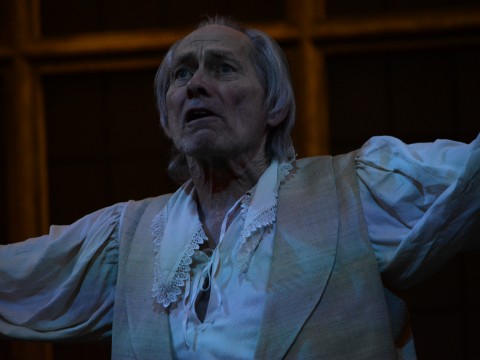 The Watershed Shakespeare Festival Collective has created a very unusual version of King Lear that is both ridiculous and sublime. But only ridiculous, from my queer point of view, in a complex positive sense, as it sheds a refreshing light upon a classic script that possesses so many elements of the ridiculous at the outset that it all comes across as a broad, fabulous, and farcical tragicomic romp through one outrageous saga of soap opera-ish proportions. And at the centre of it all stands one of Canada’s finest actors, David Fox, in the title role.

In a nuanced, breathtakingly powerful and poignant performance, he stands as a beacon of elegance, subtlety, and complex psychological turmoil. Fox employs that perfected commingling of a naturalistic poeticism in his voice and body as he clips through the dialogue and longer speeches in a way that renders the language and the physicality clear, accessible and beautiful. 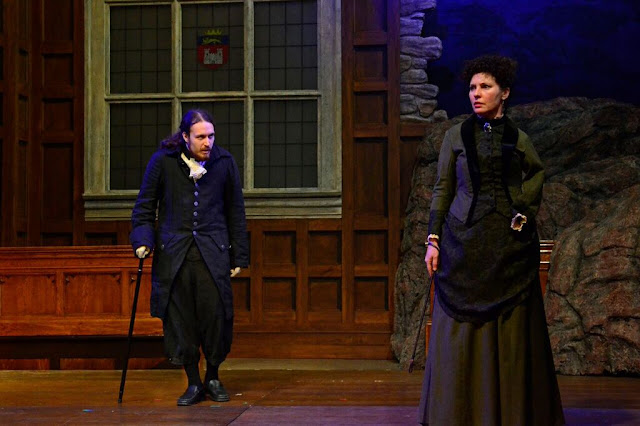 It would be too easy to suggest that the rest of the cast never reaches the same pinnacle, and perhaps a little pompous to simply say that the ensemble manages, against all odds, to make the production look like a 19th century Canadian painting come to life – a kind of Elizabethan Murdoch Mysteries colliding with Avonlea and made for a small Canadian stage.

The mainspace at Passe Muraille is the perfect intimate setting for the show, giving the audience a range of viewing possibilities. The night I attended my guest and I were the only people at a bar table on the upper level, giving the experience a light cabaret feeling, which is the perfect way to make one’s way through three and a half hours (one intermission, three mild cocktails…) of Lear’s long day’s journey into intense familial fright. 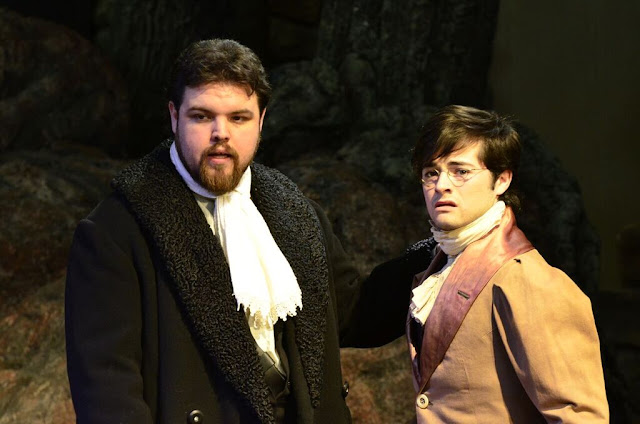 A fallen tree trunk plays a stupendous supporting role as it rests its broken beam upon the railing in the upper level of the theatre, having risen from the grandeur of a very tightly conceived regional theatre looking naturalistic set that gives the overall production a kind of diorama come to life atmosphere.

A simple version of what might be a considered a strained Group of Seven reproduction (e.g. Thomson’s The West Wind) frames the right side of the stage while a large drawing room area provides interior moments for the action to move in and out of. Incidental musical accompaniment underscores it all with a melodramatic touch that works well within the parameters of this strange and wonderful production.

The three sisters come to life in lush costumes that render them Royal Doulton figurines in action. The overall ensemble is faced with an impossibly possible task as they interpret characters with a range of acting styles. Of particular note are the moments involving Hume Baugh’s raffish convincing Fool, or Maureen Cassidy’s vividly rendered Goneril and her seushnuaously portrayted political/romantic escapades. One ethereal fleeting incident descends into hellish visual innuendo as she is effortlessly swung in a half circle in the arms of a comely paramour. Charlie Tomlinson’s Gloucester has a robust youthful quality that is charming and layered, and his costume is surprisingly stylish in a rogue’ish swashbuckling kind of way. 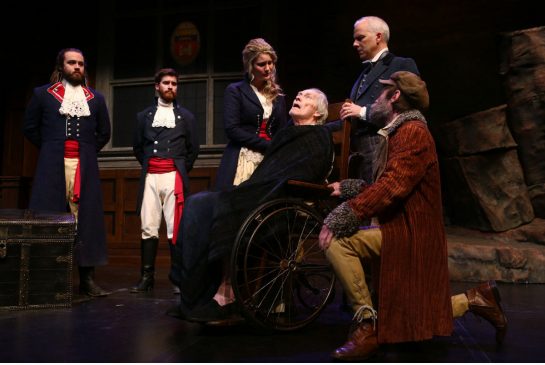 Rod Carley’s direction, placing the action within an 1837 Upper Canadian milieu, plays devilishly with the idea that, at this point in time, Shakespeare can be just about anything one wants it to be.

I longed for a slightly more cohesive stylization that might have brought the crisp clear lines of a Lawren Harris together with the less rigid richly coloristic contours of a Tom Thomson looming over the action. This could, perhaps, help the overall absurdity (approaching caricature at times) of the general mise en scene of this odd, strangely beautiful production, make more obvious visual and visceral sense. But in an age of misidentified global warfare, changing regimes on a national level, and familial dysfunction on every horizon of social and cultural mayhem, well, it was the best example of the ridiculous the beautiful and the sublime that I have ever seen – this week, and very likely, beyond…
RUNNING AT THEATRE PASSE MURAILLE UNTIL DECEMBER 6TH
Posted by bette at 11:58 AM