Anna Chatterton's Within The Glass at Tarragon Theatre 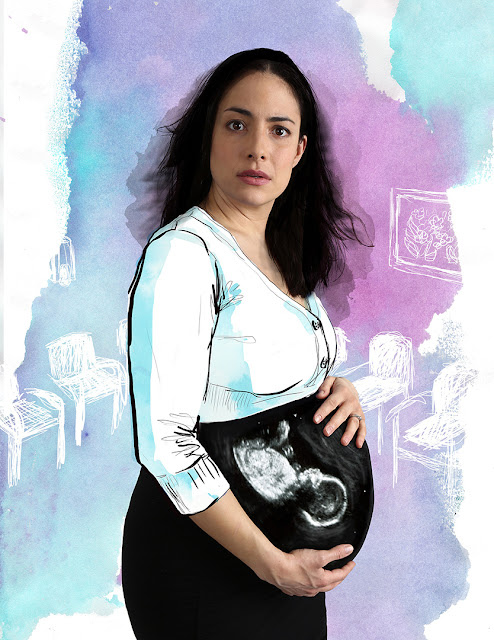 Someone once said that good theatre was just four people in a room being rude to each other. Or something like that. And there is usually food, or drink, or both, involved – copiously. Anna Chatterton’s new play, Within The Glass, has all the ingredients for this particular recipe, and to extend the food metaphor, too many narrative cooks have had a hand in the broth and turned it into an engaging stew. The domestic setting, set in a beautifully decorated upper middle class home, begins with Tzatziki and ends with Coq au Vin – capons to be exact. And the castrated capons take on rarified symbolic properties as the compromised origins of an unborn fetus become the crux of what all four people are being so rude to each other about from the get go. 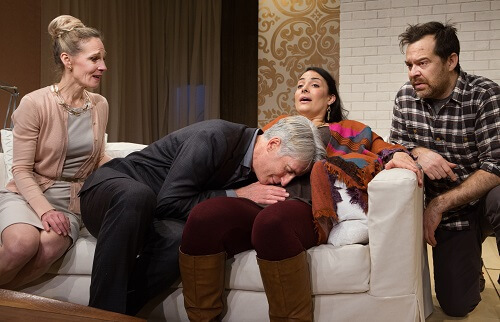 Philippa Domville is flawless as the cool, perfect study in beige fragility as she delivers every line with a careful reserve that barely conceals her immense need to bear children. Rick Roberts as her husband matches her cool façade with a touch of endearing bravado that builds to a harrowing climax by the end of the evening. Paul Braunstein and Nicola Correia-Damude, as the visiting couple, play a kind of verbal table tennis with their quirkily crafted status as straight male poet and vegetarian visual artist, respectively. Braunstein gives a powerful performance as he plays with a form of bewildered masculinity that never quite gets his partner’s desire to carry someone else’s child to full term, while Correia-Damude has fine moments yet falters frequently as her character never fully represents the power of the kind of maternal gravitas that the script grapples with. And yet this could be partially due to writing that gives her character the bulk of stereotypical lines regarding an earth mother/vegan goddess persona that becomes somewhat heavy handed by the end of the play. One placenta line, although somewhat hilarious, is a bit hard to swallow given all the clichéd character points that have come before. And yet the cast rises to the occasion in breakneck solidarity as Andrea Donaldson’s direction gives the overall piece a frequently slapstick tone that is distracting at times but necessary to the frenetic action that informs and spirals out of the dialogue.

Coming in at ninety minutes, the play may have been served better had it been ten minutes longer with an intermission. This could have spaced out the appetizers, cooled the clichés, and made room for a less predictable dessert/denouement. The plethora of narrative ingredients that might have been trimmed may be what Chatterton is getting at as she takes a hefty bite out of an over fed family myth and the complex rights of parents that can depend as much on geographic location as they can upon personal need and familial fulfillment. Within The Glass, above all else, does reveal the impressive amount of research the writer has done in order to fill her script with fascinating detail about those iconic nine months and all they can lead to.

There are powerful speeches for both of the female characters that tend to dichotomize, and also illuminate, timeworn arguments regarding some women’s need to reproduce. And these speeches put the men in their ‘proper’ place as the seemingly laid back sperm bearing objects of frequent disaffection. They make their own male-oriented pleas to be considered during the machinations of a complex mix-up that begins the play - ultimately becoming as ‘hystericized’ as the women once it becomes clear that no one may get what they want at the end of the day.

What Within The Glass does beautifully is expose the madcap, at times terrifyingly heteronormative need – becoming maddeningly homonormative in the haze of late capitalist queering during the early decades of the 21st century – to replay over and over and over again the relentless tragicomic pursuit of a family a home and a big fat income. Wouldn’t that be lovely.

Chatterton’s script, like a fabulous dinner party gone wrong, is extremely tasty, at times hilarious and thought provoking, but bears too many dishes, too many decisions on the part of a key character, some of which occur much too early in the ninety minute conversational quartet, leading the last forty minutes into a somewhat predictable and anti climatic climax. And yet it is the climax that is perhaps the most satisfying and the most reminiscent of historic dinner party/cocktail cacophony scripts. Like George and Martha at the end of Albee’s classic ‘four people in a room being rude’ scenario, Domville and Roberts, in quiet almost animalistic desperation, hint at what Chattertton’s script might have been had the narrative plot driven decisions been trimmed and served up in one or two installments, at gradual intervals, rather than a profound moment of reversal being laid out too early. As it stands, Within The Glass bears elements of a wonderful recipe for a form of dramatic comedy – the almighty dramedy – but hasn’t quite reached the preferred amount of finely tempered simmering points throughout.

WITHIN THE GLASS RUNS AT TARRAGON THEATRE UNTIL FEBRUARY 14TH
Posted by bette at 10:26 AM