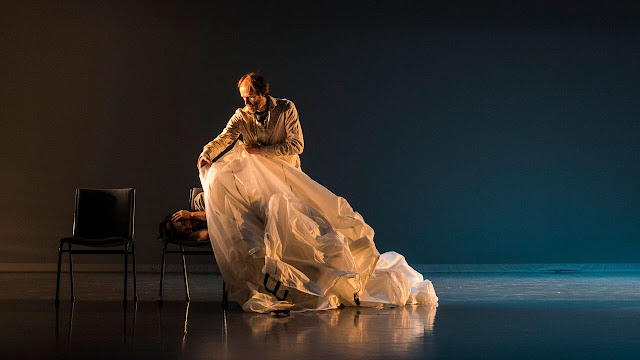 Given the somewhat comical and awkward beginnings of Men’s Circle, as the character of a folky, guitar welding therapist tries to explain in song what is about to take place, nothing can prepare the viewer for the gradual elegance and intense poignancy that evolves over the course of this unique ninety minute arrangement of dance, theatre, and music. And yet the awkwardness one may initially acknowledge could be considered part and parcel of the very narrative premise that brought this piece into existence. Being a man, in a men’s group therapy session, in the midst of strangers, all tangled up within their complex notions of masculinity, or lack thereof, can be a very daunting, awkward encounter - frequently silent and withdrawn, frequently volatile and threatening. 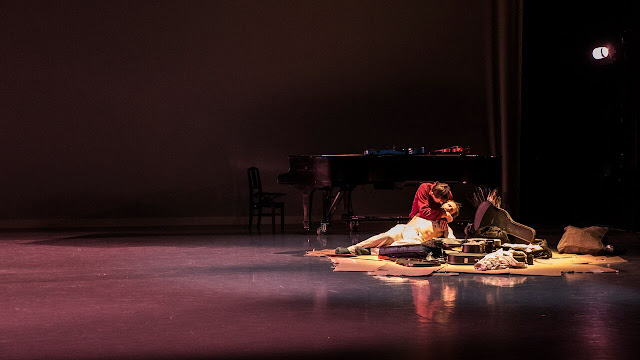 Kathleen Rea’s remarkable career as a dancer, choreographer and psychotherapist has given her the ability to bring many disciplines together and meld them into a seamless act of physical and emotional courage on her part and the part of the dancers involved in this particular piece. The vulnerability we are often taught to erase in men is fully realized throughout the piece in a variety of gorgeous choreographed modes. Written by Rea and dramaturged by Tristan Whiston, the script is an at times subtle and explosively 'out there' melange of effective textual accompaniment, nuanced with that delicate mixture of the frequently comic and tragic expressions of emotional turbulence and distress.

All of the participants have a distinct contribution to make, and they do it onstage as actors, musicians, and dancing subjects who are, at times, unable to express verbally what they are going through mentally and physically. When they are at a loss for words - words that frequently take on a kind of rhythmic Chorus Line monologic effect - then they show it in diverse dance modes that vary from the buoyantly meditative movement of a silent, overseeing angel (Bill Coleman) to the basketball, rap, jazz inspired athleticism of Rudi Natterer’s streetwise character.

When Natterer collaborates on piano with Kousha Nakhaei on violin, framed by their equally impressive dance abilities, the multi-disciplinary aspect of this joyous at times tear jerking spectacle takes one by surprise and moves the program into a layered and thoroughly engaging experience.

Mateo Galindo Torres brings a lithe, powerful presence to the character of a man suffering from poorly managed meds, and his skill at both acting and expressing physically this manic experience, becomes a beautiful and distressing expression of mental health struggles. The layered muscularity of Allen Kaeja’s strip club 'escape'-narrative is a fascinating physical and verbal contrast to the integrated dance/theatre theme, while Kousha Nakhaei’s character effectively displays the effect of a somewhat obsessive personality in the face of tentative first dates leading to lovely neophyte  romantic encounters. Deltin Sejour’s graceful and powerful way of inhabiting the character of Hercules lends a balletic athleticism to several strong sequences throughout. 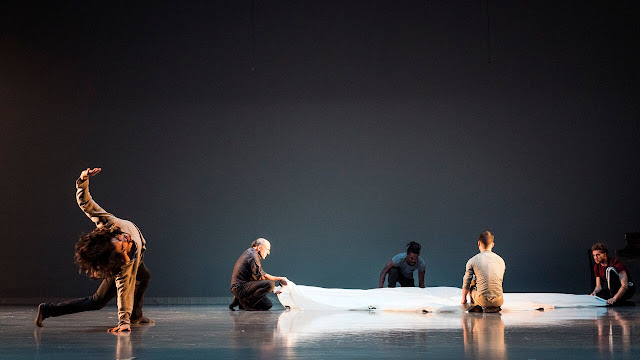 A beautifully staged highlight occurs when a naked character is supported and surrounded by the ensemble - through the use of a billowing parachute-like prop that stands in for the scene of sexual experience, and frees all of the men as they take part in a simultaneously group-supportive gesture, as well as allowing for the privacy of individual experience. And this is precisely what a good men’s circle can achieve - both singularity and collaborative support - and precisely what Kathleen Rea at the helm, and her collaborators, in full control of their own respective mentalities and abilities, do achieve in this painful, joyful, moving, and unique form of dance theatre as both therapeutic and cathartic.

And the silent angel who dwells beneath all of the onstage action is a diverse and gestural joy to watch as the freedom and elegance of his dance narrative threads seamlessly throughout - all the time representing the saddest and the happiest movements in a dominant, overseeing, and endlessly supporting role.