Ulrike Ottinger, the grande dame of German avant-garde film and
“nomad filmmaker”, has worked in Asia numerous times in her
five-decade career. Combining fact and fiction, Ottinger’s films
follow her adventurous curiosity and create a unique poetic imagery.
The three films JOHANNA D’ARC OF MONGOLIA (1989),
EXILE SHANGHAI (1997) and UNDER SNOW (2011)
presented by the Goethe-Institut follow women in Mongolia,
exiles in Shanghai, and Kabuki artists in Japan.
“An icon and cultural and emancipatory inspiration
in the German film scene“ Berlinale 2012 Special Teddy Award


Jutta Brendemühl is an arts writer & film programmer,
for the Goethe Institut and the European Union Film Festival Toronto
(among others).

She curates and reviews across genres and through a global lens,
with an eye on art-house and emerging creators. Jutta has worked with
Bernardo Bertolucci, Wim Wenders, Robert Rauschenberg, Pina Bausch,
Harold Pinter, and other luminaries.

1/ What aspects of film do you focus on when you are curating a series -
do you have specific aims in mind when you approach the themes included in any given selection of films?

So many parameters go into curating a film series: first and foremost excellence and risk-taking in the
filmmaker's work, stylistically and thematically (not to be confused with my personal likes or dislikes).

Ottinger for example is a rich "triple threat" in so many ways: She produces, directs and films her work.
Her multiple identities infuse her films: her queerness, her Jewish heritage, her life-long ethnographic interest.

The choice of films out of an oeuvre or cluster –here two features and a documentary by Ulrike Ottinger plus a
documentary about her-- has to be broad enough to paint a picture but tight enough to make sense in itself
and keep the audience's focus.

Ottinger has made two dozen films, so I decided to zoom in on her fascination with Asia – frankly also to provoke a discussion about how one can imaginatively engage with other cultures vs. appropriation. I could have shown her half dozen "China" films alone but didn't want it all restricted to one country, but to open it up to larger inter- or trans-cultural questions.

Everyone sees something else in her but everyone seems to appreciate her curiosity for the colourfulness of the world. I will challenge the audience (and myself, again) to find the intersections between these vastly different films – like the Jewish refugees on the Trans-Siberian Railway in Johanna D'Arc of Mongolia reappear as real witnesses eight years later in Exile Shanghai. 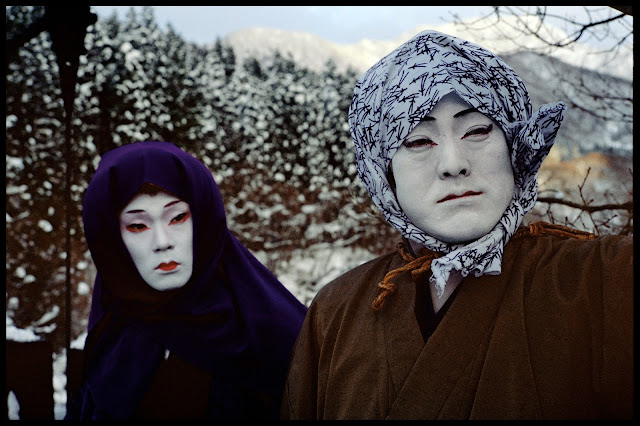 Any film series also has to work within the context of our previous and next  programming, formally and thematically and target group-wise. There's a nice flow here from my last series, which presented veteran director Margarethe von Trotta and lead actress Barbara Sukowa portraying "revolutionary women" throughout their long careers – looks similar to Ottinger at first, but very different filmmaking (more austere and direct, less playful and wild and performative than Ottinger) and a very different view of the role and place of women. Still nice to show two grande dames in a row so people see the range that has always been there in (female, German) filmmaking.

Having said that, I will go more contemporary and somewhat more "arthouse mainstream" again for our October GOETHE FILMS series to balance things out. But interested audiences need and want to know where what they see today is coming from, #womeninfilm is not a 2017 Twitter invention for example. At the end of the day, experience and gut feeling and an appreciation of the diversity of filmmaking are at play in curating an engaging series. And often enough, what I am sure will work turns out okay, and then a series I was anxious about in terms of reception sweeps us off our feet. There's no formula.

Great question, I wonder what stories Ulrike as a queer woman of her generation who self-produced –she's 75 and finishing up her next doc in Paris as we speak-- would have to tell! In her films, women certainly run the show, like the Mongolian warrior princess in our last wild-ride film, Johanna D'Arc of Mongolia (and the film's numerous female tech staff).

Ottinger was the first filmmaker from the West to film in Mongolia after the Wall came down, by the way, 30 years after writing a screenplay about Mongolia, and that timeline shows in the cultural complexity of the film. And there are stories out there how her team was under government surveillance on various projects in Asia and that it unnerved as much as energized her – after all her films seem important enough to register as a threat. She has certainly proven to have grit in a man's world, and industry.

Homoeroticism and fetishism, being a (strong) woman and being lesbian, are just always there as an underlying fact. Ottinger takes a stand in such actions as awarding, just a few days ago, the Berlinale Documentary Award (she was one of three jurors) to Austrian filmmaker Ruth Beckermann, whose subjective essay film The Waldheim Waltz unpacks the 1980s public debate around the despicable Nazi past of former UN Secretary General Waldheim.

3/ The series being shown focuses on Asian culture, as well as the tendency to cast female roles throughout Ulrike's career - how do these two narrative choices become integrated into the work - i.e., does the cultural environment  being focused upon specifically address the roles of women, or is there gender crossover between male and female identity in the work as the female cast presents your aesthetic and/or narrative vision?

Ulrike's films are never simple nor explanatory (don't get fooled by her quirkiness and surrealism) and she loves playing with gender roles and in-betweenness. It's that ambiguity and playfulness that draws me into her films (and keep them a mystery even after re-watching).

Take her film Under Snow, which is our opener, fairly recent, from 2011. She chose to follow two Japanese Kabuki artists who are transformed (a key theme in her work!) into a man-wife couple who wander the past and encounter such ancient rituals as the "bridegroom throwing".

But in Kabuki of course, the female roles are played by men, while the make-up and costumes appear, at least to Western audiences, extremely gender ambiguous in either direction. And yet, Ottinger herself describes it primarily as a film about "Kabuki, poetry and the reality of the Snow Country". You have to want to see and read the subtext.

4/ Could you talk about how lesbian identity plays a role in the current film series, either directly or indirectly, aesthetically and from a narrative perspective?

I'm not sure I would even talk about a specifically "lesbian" identity in her films, I think she was early on non-binary. What she most certainly is is a feminist and a queer filmmaker. Her previous (also "Chinese") film MADAME X is about a female pirate queen.

In her documentary Exile Shanghai, which makes up the very political middle of our series, about European Jews in the Chinese metropolis in the 1930s and beyond, she chose one gay character who talks about life in gay Shanghai.

Ottinger herself, always in a three-piece suit, is a female dandy. I imagine her reflected in the ethnographer-guide Lady Windermere from Johanna D'Arc of Mongolia. Someone called that film, our series closer, which starts out as a ficticious and then switches over to a documentary style in the most outlandish way, a 'lesbian Lawrence of Arabia..' Perhaps an overstatement. But one review of Johanna got it right I think: "There is a lesbian undercurrent – allusion—throughout the movie, which is never really overt. It can be described best as a sensibility that informs the work, that is part of its fabric, without being pointed to." (Bay Area Reporter) At the end of the day, Ottinger's films are for and about all, for refugees and nomads, for dreamers and freaks, for performers and poets.

FOR FURTHER INFORMATION (TICKETS, SCREENINGS, ETC.) GO TO GOETHE FILMS;
https://www.goethe.de/ins/ca/en/ver.cfm?fuseaction=events.detail&event_id=21116024
Posted by bette at 9:11 AM