“I laughed out loud”, “If you like the jokes in Come From Away, then look into Cottagers and Indians.” – The Globe and Mail
“Full of mischievous good humour”, “Sincere and amusing” – Mooney on Theatre
“Light and entertaining” – NOW Magazine
“Drew Hayden Taylor has a deft touch for mixing comedy and commentary in an entertaining and all-Canadian form of social satire.” – Vancouver Sun
Cottagers and Indians takes a sincere and pragmatic look at the current conflicts between First Nations traditional water usage and property owners in cottage country who are looking to enjoy an undisturbed summer getaway.
Approximate running time is 80 minutes with no intermission.
The cast and crew of Cottagers and Indians would like to thank the Centre for Indigenous Theatre for the loan of the canoe. The canoe frame was constructed by Tim Hill of The Rabbit’s Choice.
Photo of Drew Hayden Taylor supplied by artist.

“There are no real heroes or villains in a story like this,
only people trying to look after their families.”
DREW HAYDEN TAYLOR 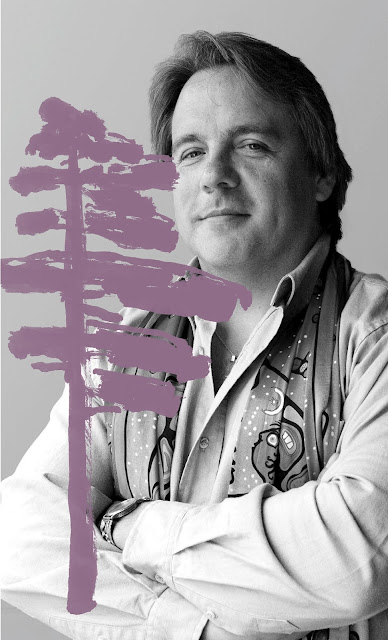 There very well may not be any real heroes or villains in the current production of Drew Hayden Taylor's Cottagers and Indians, but there is most certainly an evening of highly engaging, informative,  and frequently comical struggles and interventions into a history of the land we conitunully misidentify as Canada.  And of course there's the title, a seeming play on Cowboys and Indians, and we all know how well that worked out.

The pivotal struggle of the play is created around the growing patterns  of a particular kind of wild rice, threatened by the insistence on pristine shorelines easily accessible to boaters, waders, and general all around beach lovers.

The story and the image of the rice that grows along the edges of a small Ontario Lake moves throughout the narrative, and is told beautifully and intricately by actor Herbie Barnes as he effectively portrays an indigenous man struggling with the choices of cottagers as they make claims on the land and the crop he is trying to save from motorboats, swimmers, water skiers, and a largely unsympathetic chardonnay drinking white woman. Sounds like a kind of heroes and villains story to me.

And yet Drew Hayden Taylor skilfully plays with this idea and allows his male protagonist to reveal layers of sympathy and understanding that  mingle with a dry, at times subtle wit. The female character however is written and performed in a way  that ultimately frames her persona with a decidedly bitter and rather predictable view of her cottage country beliefs. When she speaks of having been a longstanding part of cottage country history (over a hundred years) she  profoundly misses the point regarding the centuries long struggle for Indigenous rights to land occupied and harvested far longer than a mere century. 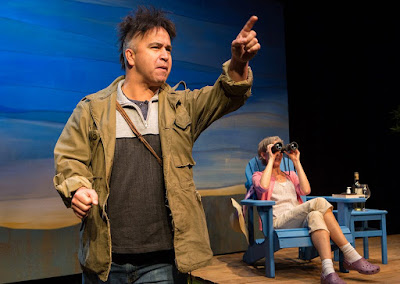 As Barnes takes his indigenous character on a layered journey through the use of humour and various levels of genuine emotion, Tracey Hoyt's performance as the white woman, on opening night, tended to reveal a vocally charged anger and indignant entitlement that rarely moved into any real analysis. Her portrayal effectively delivers the kind of blind ambition people frequently take part in as they protect their privileged cottage loving heritage for the sake of their individual families and their future dreams. But she is never given quite enough depth for anyone to take her stance seriously. This may, of course, be the point and the primary question - should these lakes ever have been colonized, 'settled' and industrialized in the first place. No... But they were, and Taylor's play delivers a strong message about how one might begin to address the problem as the planet grows increasingly weary of the ways in which the industrialization of food and pleasure have taken over a rapidly diminishing landscape.

And there is tragedy mixed in with the biting comedy that Taylor is famous for. It comes, in part, at the expense of a fully realized cottager. And yet this is perhaps a large part of the point of this particular struggle, based on actual events. The story of James Whetung is well worth researching for any theatregoers interested in delving deeper into the ways in which 'Canadian' legal structures have played a part in the state of wild rice and related issues surrounding the ongoing battle to preserve the land and its pre-settler state. 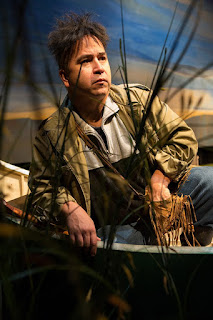 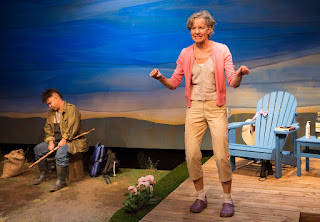 Herbie Barnes & Tracey Hoyt as the 'Cottager' and the 'Indian'

The setting is convincing and works well for the comic tone that permeates, and yet one frequently longs for a beautiful vista (perhaps a panoramic projection of the actual lake)  that compliments the primary plea to save the natural endowments of this body of water from the pristine, unnatural beauty many cottagers have come to expect from their lovely front window that overlooks a decidedly manicured paradise, away from the urban mayhem of their city lives.

And of course the central, somewhat absurd, conundrum is made clear when one considers indirectly, through the words of Barnes' character, that a two hour drive into cottage country so one can enjoy the pleasures and conveniences of home - replete with showers, toilets, nearby grocery stores, and a nice big SUV to drive there, with a motorboat in tow - is a profound insult to the land and the people who have depended upon that land for sustenance long before the seadoos, the flip flops, the moulded plastic Adirondack chairs, and the gas barbecues arrived. 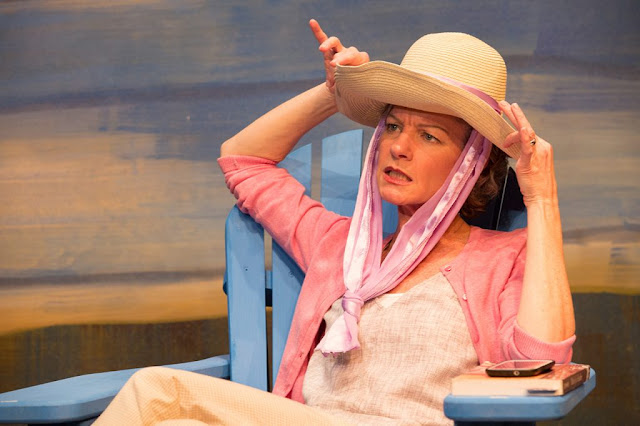 Director Patti Shaughnessy has effectively taken the playwrights choice to construct the play along the lines of duelling monologues by infusing a kind of agitated, kinetic life into the work. By having the characters stand separate, never moving into each others world completely, but always responding physically to the dilemma at hand, they remain continually on the edge of that unguarded moment when they do actually attempt to move toward a kind of reconciled posture. But posture is a key word, especially when the white female representative of industrialized settler culture never fully moves into any real kind of understanding. She seamlessly and senselessly dismisses the history that has come before her. As a passive-aggresive participant in colonization her pleas are hard to endure, and she becomes a lone dramatized cottager barely able to withstand her self-made trauma/ tragicomic venture into the culture of constructed nature. One may want to sympathize but there is far too little of her story in the play to make  sympathy a viable option. She is blinded by personal disaster (among other things) - and that is perhaps the only  shallow entry point into feeling anything of depth toward her. 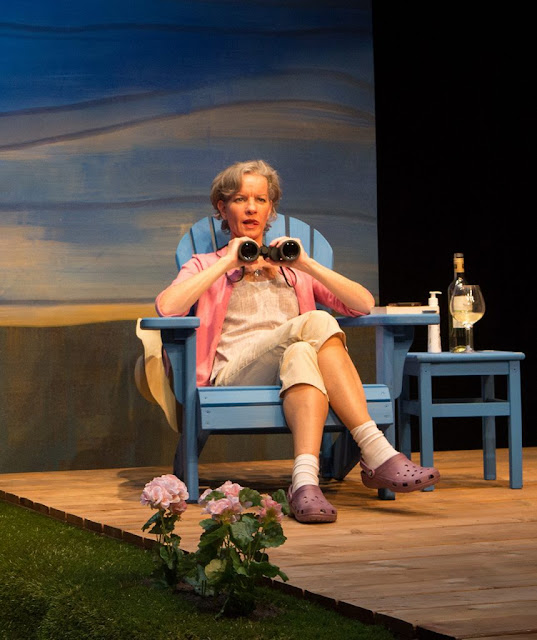 An ongoing attempt at reconciliation is something this country has been tragically marked by historically. Recent weeks have seen devastating examples of this. Taylor's play adds to the conversation with a kind of light/heavy/hearted testimony by two people at odds with a system that keeps them apart, with too few signs that they will come together anytime soon.

Commissioned by Tarragon Theatre, Cottagers and Indians is a promising attempt to represent elements of our complex heritage upon this mismanaged land. Coming in at eighty-minutes (no intermission) - a detailed workshopping process, an edited first half, and a short second act could move the piece beyond entertaining and thought provoking and toward a more in depth analysis of the ongoing plight of 'Cottagers' and 'Indians' - as their paths continue to cross and heroes and villains are dismissed while we are left with, as Taylor has said "only people trying to look  after their families."

But as it stands this play is well worth seeing as we continue to grapple with the fate of what we may choose to call 'Mother Earth' - among other things. 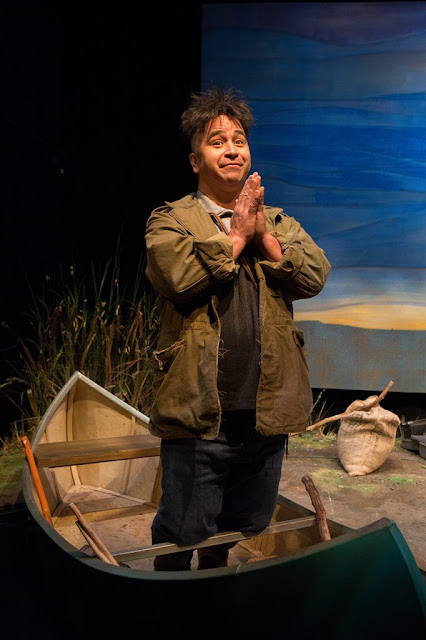 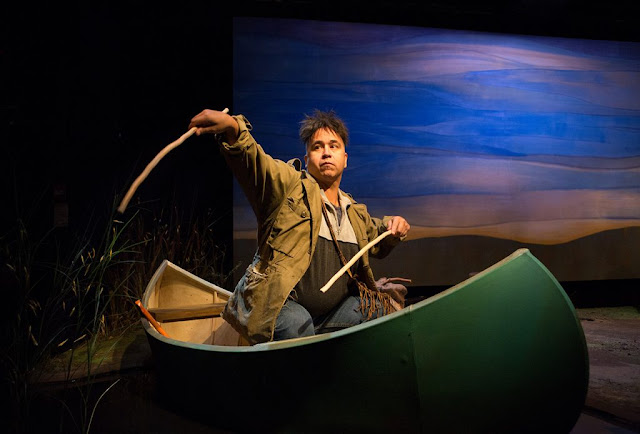 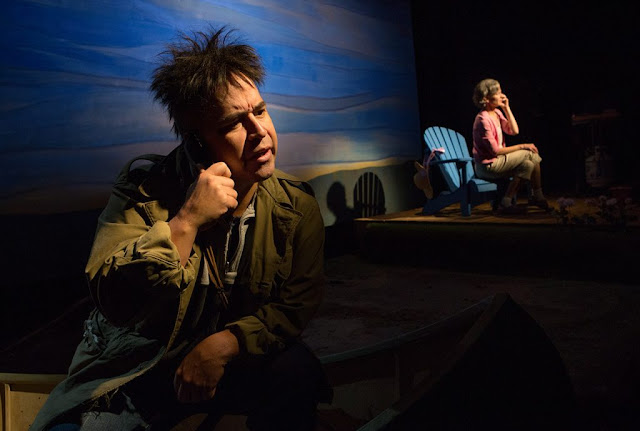 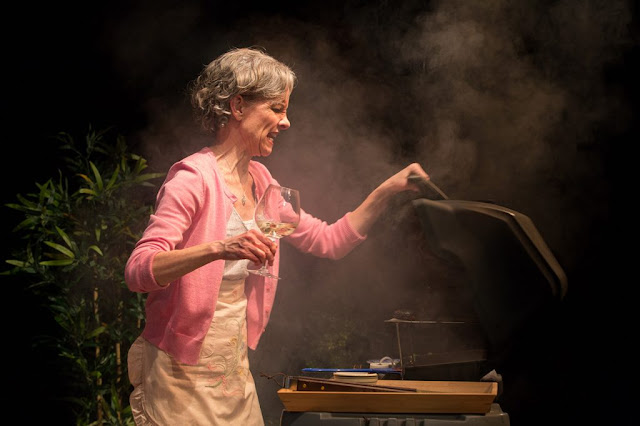