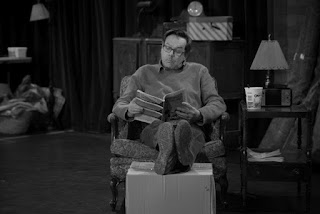 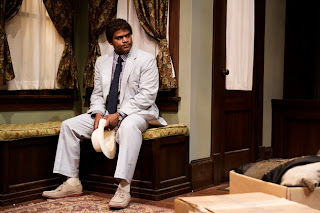 "There ain't no colored people in Clybourne Park!"

There can be the tendency, in some Pulitzer-Prize winning plays (e.g. Doubt, Proof), to represent social concerns in a sharply naturalistic way that sheds light on the some of the most complex things we experience in life, but the light frequently appears to be less self-reflective, and more glaringly enigmatic and placating as it implicates its audience in a rather amiable and complacent manner. Clybourne Park is a case in point as the script dwells on conversational entanglements about exotic climes and problematic suburban neighbourhood conflicts, but never fully addresses any workable way of actually dealing with some of the most complex issues that arise. A barrage of racist and sexist jokes is perhaps the most complicated and uncomfortable part of a script that cleverly creates a first act set the during nineteen fifties, with the aftermath of the Korean War looming large upon the narrative horizon, and culminates within a more contemporary setting where the same conflicts still seem to lurk within a landscape where resolution seems more and more difficult as time passes.

A very clichéd and sentimental ending, depending upon the proverbial tormented letter from a distraught tragic figure, appears too neat and tidy given the expectations around very serious racial issues that are presented at the outset. But all in all, these convoluted narrative strains work together to create a profoundly entertaining and mildly thought provoking piece of theatre.

The current studio 180 theatre production of the acclaimed Bruce Norris dramedy, seamlessly directed by Joel Greenberg, does justice to a clever and sharply worded script that runs the gamut from cliff-hanging stories and jokes that don’t always get fully told, to bickering neighbours who frequently lapse into cleverly conceived transitions from race politics to tourism and place names. This is the strained beauty of Norris’ script as it reveals the superficial wanderings of some suburban lifestyles. But the ending doesn’t quite fulfill that dramaturgical task at hand. 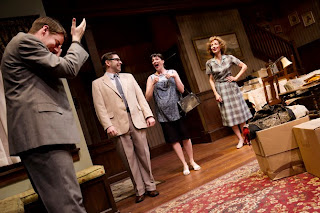 A superb ensemble never falters as Michael Healey leads the cast through his paternal nightmare about the tragic circumstances of his son’s profoundly conflicted experience as a solider in the Korean war. Norris has woven the personal and the political into a tightly layered, closely knit package of serio-comic mayhem. Healey’s mannered and engaging performance becomes the sticky glue that holds everyone together within a form of collective chaos as the second act doubling of all the characters from the first act turns him into a subservient subject who literally unearths the key to an anti-climactic finale.

Sets by Jung-Hye Kim add a powerful television-like naturalism to the plot, reminiscent of a sitcom environment suitable for an episode of All in the Family or Maude. Jeff Lillico, Sterling Jarvis, and Mark McGrinder deliver seamless performances as an array of characters ranging form Lillico’s brash member of the clergy to Jarvis’ protective husband and McGrinder’s bumbling concerned citizen intent upon a misidentified form of political astuteness.

Kimwun Perehinec gives a virtuoso performance in the dual parts of the indignant housewife and the hearing impaired, over-protected spouse as she approaches very difficult roles with an emotional intensity and subtle charm that turns to disgruntled outrage in the second half. Maria Rocssa’a grieving mother and brittle lawyer match Perheninec’s skill for distinct characterization as she jumps from the archetypal emotional confines of a fifties housewife to the dubious liberation of a very direct caricature of a modern working woman.

As a response to Lorraine Hansberry’s acclaimed Raisin In the Sun, Norris has created a scathing commentary on the ways in which some things don’t change all that much over a period of fifty years, in life and in the theatre. A 2010 Guardian reviewer said it best with words that strike home in the blanched frequently under-subscribed seats of many Toronto theatres:

Ironically, there is no clearer reminder of the fact minority communities have yet to enter the middle class than a trip to the theatre. To watch a play about what happens when black people enter a white environment and yet to still be one of only a handful of black people in the audience, is a doubly disarming experience. As long as theatre remains so white and middle-class it will continue to be a deeply flawed medium for communicating a message about what white people have, and black people don't.