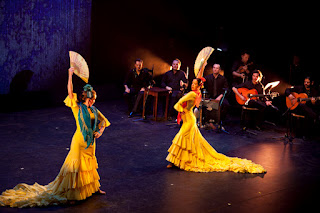 "Training with Esmeralda is learning both technique and cultural theory. She believes that flamenco can shape your life,
that it can empower you."
Paloma Cortes (dancer in Aguas/Waters) 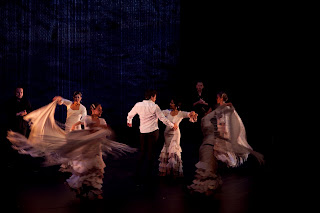 The image of male and female voices in flamenco has evolved over time: although loud and low female voices were already significant in Muslim Spanish culture, today’s tradition of an “archetypically” low broken male voice has existed for merely forty years. At the beginning of the twentieth century, the most popular male voices of the genre, Antonio Chacon, for example, were clearly linked to the refined image of the opera virtuoso. Moreover, homosexual relationships in flamenco circles, as well as male transvestism, were always present despite censorship.


Music and Gender: Perspectives from the Mediterranean
edited by Tullia Magrini 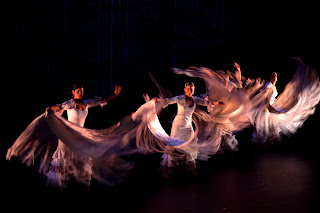 Flamenco has a broad, diverse history reflecting forms of gender and cultural theory that your average spectator may not choose to acknowledge during an evening of sensual, high spirited dance. Veteran dancer and choreographer Esmerlada Enrique, a fourth generation Texan with Hispanic roots, lays bare these cultural traditions and crafts a beautifully deceptive movement through female gender and sensuality in her recent creation Aguas/Waters. 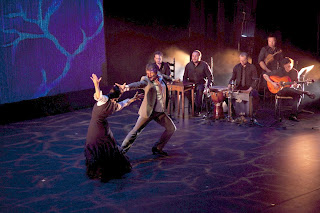 Citing water as a powerful life source in the program notes, Enrique proceeds to take the viewer through an incredible evening of flamenco, populated by mostly female dancers and an all male musical ensemble that provides a thrilling accompaniment that could stand on its own as a brilliant concert of voice and instrumental segments. But the power of Enrique’s creation demands a fully integrated spectacle that features the female body as it responds to thundering life forces ranging form the deep song vocals of two gifted singers (Manuel Soto & Chris Church) to huge ambient filmed seascapes by Jacob Niedziecki. These gorgeous elements move seamlessly, often simultaneously, to the strains of diverse musical traditions - all assembled in order to frame the deeply articulated steps of a dancing ensemble of five women and a single man. 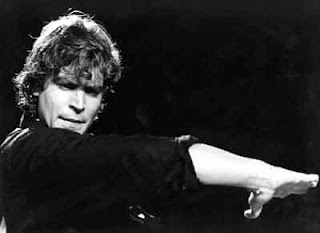 Juan Ogalla has choreographed his solo pieces in the program and is featured throughout as a mostly lone male presence that emerges from the group of women from time to time, periodically stepping into shafts of sharp contained lighting by Sharon Digenova as he displays incredible characterization and exquisite skill. The rhythmic, tightly syncopated pounding of his feet and the penetrating intent of his face create an astounding sense of passion as he dances alone.

Choreographed by Enrique, the women’s ensemble take the stage at the outset, at times separating into solo moments as the essence of the water theme emerges as a kind of primary life force that allows a powerful masculine presence to frequently rise from among them. This is where the deceptive sensuality and the complex gender theory around shifting cultural mythologies surfaces and begins to create a deceptive path through gender equity. As an audience we see the costuming of the lone male dancer, unadorned by the vibrant colour and the long regal train of the women’s dresses. Ogallo is able to display all four limbs in a breathtakingly fluid fashion that initially appears to separate itself from the flowing agility and frequently abrupt staccato power of the gowns. Gradually we begin to see the women’s bodies emerging, in the brief calculated rise and fall of the fabric, from beneath the skillfully manipulated layers of their historically influenced costumes. This is where we start to experience the equally powerful roles within flamenco choreography that feminine presence occupies, and that Esmeralda Enrique has so skillfully woven into her work.

Ideas around dominant forms of machismo begin to fade and blur among bodies as the evening ultimately speaks of the ebb and flow of heavily gendered life forces as they simultaneously align themselves with - and sharply defy - stereotypical expectations around the commingling of masculine and feminine prowess within a single dancing figure. Simply speaking, the women, together and apart, are as skilled and as powerful as the single man. Virtuosity becomes a joyful test of spirit and endurance, passion and celebration, as the overall group moves in waves of choreography that display a diverse array of flamenco skill and technique. 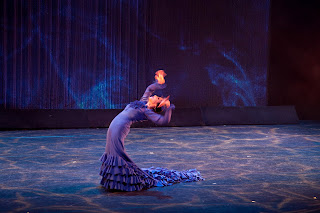 A curtain call bursting with camaraderie among the entire ensemble casts a final light upon Enrique’s brilliant play of gender forms as solo numbers and brief duets occur. The presence of same sex union, although faint and deeply subtle through the presence of the group of dancing women, and the frequently auto-sensual figure of the lone male body among them, alongside the homosocial presence of the musicians and singers, speaks unconscious multitudes regarding the fact that gender history writes and re-writes itself through a myriad of cultural forms. The origins of flamenco, moving rapidly through various cultural traditions, began to position women through “a more liberated style of dance, asserting in this way their power and authority and simultaneously evoking their…roots…[and] origins in order to satisfy the desire for exoticism of their masculine audience.”* Esmeralda Enrique’s modern flamenco brings all of this together in Aguas/Waters as it displays a life force as changeable, as erratic, as fluid, and as beautiful as sexuality, sensuality - and the sea.

* Music and Gender: Perspectives from the Mediterranean
edited by Tullia Magrini
UNIVERSITY OF CHICAGO PRESS