Light seeps under my eyelids


red haze, blue haze
we move in slow motion
dark, vertical liquid forms
that shape and reshape
yesterday
I was thinking of you
talking with you as I often used to
butterfly touch, kiss your skin
soft, blood-filled tissue
salt and gardenia
Through a deafening sleep
I wake to a cool bed
soft quietness of an empty room
the unused space beside me flat
I ache
as if a part of my body is cleaved away

light seeps under my eyelids
the emptiness will undo me
so I curve into the imagined contours of your back
a jigsaw puzzle of pieces
a blanket of skin . . . 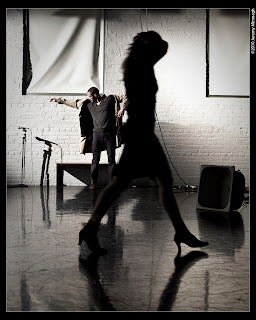 I like minimalism, but only when it’s excessive. A bare stage with a few inventive props can go a long way. Add two sexy dancers, some scattered segments of live dialogue and lush recorded spoken word by acclaimed poet Jill Battson, a final hourglass sequence complete with sand and flower, and you have a piece of dance theatre performance that takes a bit of time to warm to but is worth the effort by the climactic end of a thoughtful, evocative, at times explosive interrogation of romantic entanglement.

Paris 1944/Gallery, running until April 28th as part of Harbourfront Centre’s World Stage, is a richly textured showcase for performative movement as it meets the frequently abstract, faintly expressionist aesthetic that the Dietrich Group explores in this hour long meditation on life, death, love and a touch of nudity. 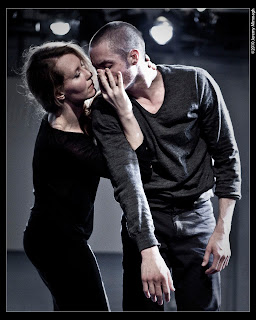 The male body that is fully exposed near the end of the piece illustrates most graphically the element of incompleteness that the overall program seems to possess. When Tyler Gledhill embraces the semi-nude body of Danielle Baskerville there is a staggering sense of corporeal fragmentation that has been dabbled in throughout the program. The onstage sinks turned into lamps quirkily bespeak this displaced, unfinished quality, along with a haunting, suspended bag of sand that twirls until it has emptied itself on top of a single blossom. 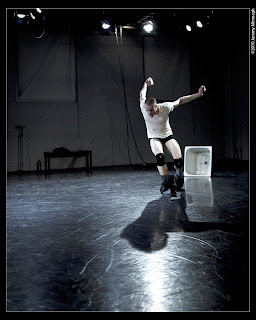 Gledhill’s ability to combine supple rhythmic contortions with vibrant explosive water-spouting moments are matched by Baskerville’s ability to join her partner in lithe sensual duets that hint at a form of full blown sex that never quite comes to fruition. Perhaps the most engaging part of the evening occurs when both dancers rhythmically circle the performing space and shout a single line that simply and powerfully states their relationship to mortality. 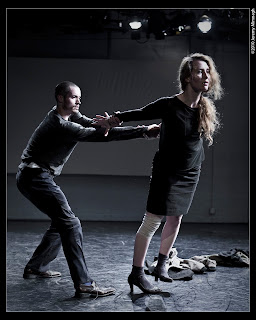 D.A. Hoskin’s direction and choreography bears the mark of a kind of post-modern staccato form of sharp impressionistic scenes glued abruptly together through the use of costume change, props being placed and put in motion, and moments of cinematic self-reflection shot through with seemingly disconnected and metaphoric competition - replete with handsome, enthusiastic spectators and exhausted marathon runners.

The gallery setting positions the overall composition as a kind of moving installation that, like spare pieces of sculpture dwarfed by a large white gallery, become mammoth commentaries on time, memory, and space. Ultimately Paris 1944/Gallery is at once soothing, stimulating, thought provoking, sexy - qualities made beautiful by a kind of full scale assemblage of disparate, incomplete parts that create a finished meditation - like love, like death, like art, like life.

Paris 1944/Gallery runs until April 28th
at the Enwave Theatre
as part of Harbourfront's World Stage
Posted by bette at 8:49 PM